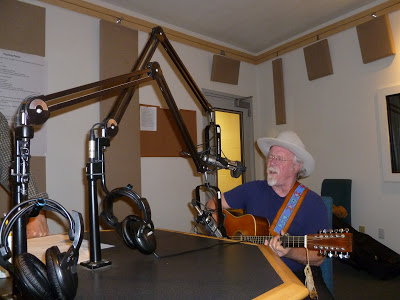 On the show, Bridger discusses the issues raised in his most recent book, Where the Tall Grass Grows: Becoming Indigenous and the Mythological Legacy of the American West, which “explores the impact of Native American culture on the American psyche… and examines the impact of indigenous American mythology on contemporary identity and the development of modern popular entertainment, particularly the Hollywood film industry.”

On the show, Bridger contrasts the roles played by iconic figures like Sitting Bull and John Wayne in depicting Indian culture, and the impact of Lakota holy man Black Elk and his book, “Black Elk Speaks.” Ken McKenzie-Grant participated in this interview and the show includes live performance by Bridger.

This is our second Rag Radio interview with Bobby Bridger; the first occurred on Nov. 18, 2011, and you can listen to it here.

Bobby Bridger, who lives in Houston, is also the author of A Ballad of the West, and other books about native American culture and the American West. A descendant of legendary “mountain man” Jim Bridger, Bobby was featured in an entire chapter of Jan Reid’s classic book, The Improbable Rise of Redneck Rock.

Bridger, who is also a trained sculptor, painter, and art educator, has appeared twice on PBS’ Austin City Limits, on PBS’s American Experience, and on Good Morning America and other major national media. He is the composer of the anthem of the Kerrville Folk Festival, “Heal in the Wisdom,” and London-based Qube Pictures released a boxed set DVD collection of his highly-acclaimed epic theatrical trilogy, A Ballad of the West.