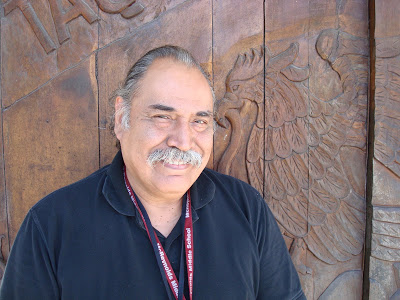 
Carlos Calbillo was active with SDS and the Mexican-American Youth Organization (MAYO) in Texas in the ’60s and ’70s, and edited the Houston Chicano newspaper, El Papel.

He has worked in film and television and has produced numerous short films on subjects ranging from community activism to musical documentaries on Texas and Chicano/Latino musicians, including Doug Sahm, Freddy Fender, Mance Lipscomb, Little Joe y La Familia, and ZZ Top. His film, The Case of Joe Campos Torres, documented one of the most infamous cases of police misconduct in Houston history.

Carlos is the Artist-in-Education at the Southwest Alternate Media Project in Houston, and teaches filmmaking at the Raul Yzaguirre School for Success in Houston’s East End.

In addition to covering Carlos Calbillo’s work as an activist and filmmaker — and the underrecognized legacy of Chicano activism in Houston, Texas, and the Southwest — we discuss the new Tejano Monument on the Texas Capitol grounds and the role of Tejanos in Texas history.