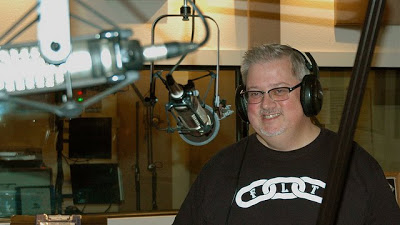 Dalas City Archivist John H. Slate, the author of Lost Austin, was our guest on Rag Radio, Friday, December 7, 2012. Lost Austin — a recently published volume in the “Images of America” series — records some of the rich and unique history that shaped Austin’s special character.


And listen our show with Barbara K., Don Paul, et al here :
Rag Radio is a syndicated radio show produced in the studios of KOOP-FM, a cooperatively-run all-volunteer community radio station in Austin, Texas. It is broadcast live Fridays at 2 p.m. (CST) on KOOP, 91.7-FM in Austin, and streamed live on the Internet, and is rebroadcast on WFTE-FM in Mt. Cobb and Scranton, PA., on Sunday mornings at 10 (EST).

John H. Slate is the archivist for the City of Dallas, where he is responsible for historic city government records in the Dallas Municipal Archives. Slate’s recently-published book, Lost Austin, features images of iconic Austins institutions, most of which no longer exist.

On the show, John discusses the role of the archivist in the preservation of local history, the historical importance of alternative journalism, and — joined by our Carlos Lowry — reminisces on early Austin and especially its punk and other seminal music scenes. Interesting irony: John Slate appeared in Richard Linklater’s iconic indie film, Slacker, as a JFK conspiracy nut. Now, as Dallas municipal archivist, he coordinates the files on the Kennedy assassination.

Slate is a member of the Academy of Certified Archivists, has a BS from UT-Austin and a Masters in Library and Information Science, worked at the Center for American History at UT-Austin for 13 years, was curator/librarian at the Hertzberg Museum of the San Antonio Public Library, and was archivist at the Texas African American Photography Archive in Dallas.

He is past chair of the Government Records and the Visual Materials Sections of the Society of American Archivists and served as president of the Society of Southwest Archivists 2010-11. He is a member of the Texas State Library and Archives’ Historical Records Advisory Board. 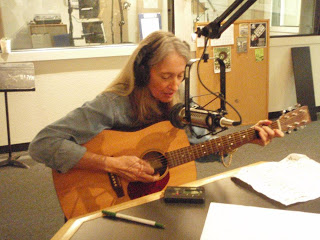 Singer-songwriter Barbara K. performs on Rag Radio, Friday, Dec. 14, 2012. Photo by Tracey Schulz / Rag Radio.
Barbara K was half of the recording act Timbuk3, whose 1986 song, “The Future’s So Bright, I Gotta Wear Shades” was a big pop chart hit in the U.S. and England. The group traveled with Bob Dylan, Sting, and Jackson Browne, appeared on Saturday Night Live, and was nominated for a Grammy for Best New Artist in 1987. Barbara performs on the show with Austin violinist and activist, Richard Bowden, and Gerald Torres, who — in his other hat — holds the Bryant Smith Chair in Law at UT-Austin.

Barbara Kooyman helped create Artists for Media Diversity (A4MD), to protect freedom of speech through the funding of services for alternative non-commercial media sources, to foster independent media voices, and to promote musical and cultural diversity.

“Artists for Vieques,” was produced by AM4D in collaboration with the Latino Public Radio Consortium and the National Federation of Community Broadcasters, and features recording artists from Puerto Rico and Austin — like Willie Nelson, Los Lonely Boys, and the popular Puerto Rican band Calle 13 — supporting the construction of WVQR-FM, which will be the only public radio station on the small Puerto Rican island of Viques that the U.S. Navy used as a bombing range and testing ground until protests forced its closure in 2003.

Don Paul is a New Orleans-based poet, recording artist, and activist, and the author of more than 20 books, including four novels and four books of poems. In 1971, at age 20, Don Paul was the youngest winner of a Stegner Fellowship in Creative Writing at Stanford University (other winners include Ken Kesey and Larry McMurtry).