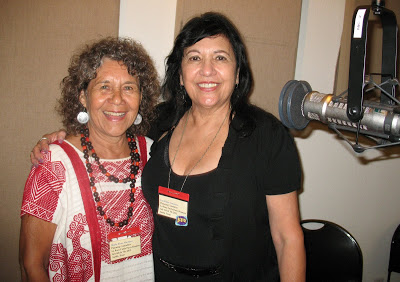 Maria Elena Martinez and and Luz Bazan Gutierrez discussed the colorful legacy of the historic La Raza Unida Party with Thorne Dreyer on Rag Radio, Friday, July 6, 2012. Both women played instrumental roles with La Raza Unida from its founding in 1970.

They discussed the history of the party, which grew out of the Chicano activist group, the Mexican American Youth Organization (MAYO), its role in empowering Mexican-Americans in Texas and elsewhere, and its lasting political and cultural impact.


Rag Radio features hour-long in-depth interviews and discussion about issues of progressive politics, culture, and history. The syndicated show is produced in the studios of KOOP-FM, Austin’s cooperatively-run all-volunteer community radio station. It is broadcast live on KOOP and streamed live on the Internet, and is rebroadcast on Sunday mornings on WFTE-FM in Mt. Cobb and Scranton, PA.

In 1970 young Mexican American firebrands in South Texas rose up to demand change, speaking out against discrimination and creating their own political party, which they called La Raza Unida. In the span of about eight years, La Raza Unida energized a youthful following, spread to other states and elected candidates in Texas’ predominantly rural Mexican American communities where Anglos historically dominated…

Now graying and with a few in their 70s and beyond, some party activists [gathered in Austin, Texas, July 6-7, 2012] for a rare La Raza Unida reunion and conference.

Maria Elena Martinez was the last chair of the Raza Unida Party in Texas, serving from 1976–78. Maria Elena, who has a Masters in Education from the University of Texas at Austin, worked in private and public education for 34 years, specializing in bilingual education.

A volunteer at Alma de Mujer Center for Social Change, a project of the Indigenous Women’s Network, Martinez now dedicates her time to spiritual work and healing. Since 1992 she has studied Shamanism through the Foundation for Shamanic Studies and is a Minister of the Circle of the Sacred Earth.

Luz Bazan Gutierrez was in Crystal City at the formation of the Raza Unida Party and was the first Raza Unida Party county chair for the state of Texas. Then married to Raza Unida founder Jose Angel Guitterez, she was instrumental in a move to empower women in the male-dominated movement.

Luz Bazan was named one of “100 People of Influence” by Pacific Magazine, and has received a national Lifetime Achievement Award for her work with the Latino community and a Peace and Justice award for her work related to empowering low income persons. She is president and CEO of Rural Community Development Resources in Yakima, Washington.

Maria Elena Martinez and Luz Bazan Gutierrez discussed the legacy of La Raza Unida on Rag Radio, Friday, July 6, 2012. Video by Jeff Zavala of ZGraphics who filmed the show live in the KOOP studios in Austin.
Rag Radio has aired since September 2009 on KOOP 91.7-FM in Austin. Hosted and produced by Rag Blog editor and long-time alternative journalist Thorne Dreyer, a pioneer of the Sixties underground press movement, Rag Radio is broadcast every Friday from 2-3 p.m. (CST) on KOOP, 91.7-fM in Austin, and is rebroadcast on Sundays at 10 a.m. (EST) on WFTE, 90.3-FM in Mt. Cobb, PA, and 105.7-FM in Scranton, PA.