“Sports has become such a big business that the line between journalism and being a broadcast partner for all intents and purposes has been obliterated.” — Dave Zirin on Rag Radio

Dave Zirin will speak on the politics of sports at the Belo Center for New Media on the University of Texas campus in Austin, Monday, April 1, from 7-9 p.m., an event sponsored by the Texas Program in Sports and Media.

Dave Zirin, sports editor at The Nation and author of Game Over: How Politics Has Turned the Sports World Upside Down, was our guest on Rag Radio, Friday, March 22, 2013. Rag Radio is a syndicated radio program produced at the studios of KOOP 91.7-FM in Austin, Texas.

Listen to or download our interview with Dave Zirin here:


Dave Zirin has been called “the best sportswriter in the United States,” by noted sports journalist Robert Lipsyte. Named one of UTNE Reader’s “50 Visionaries Who Are Changing Our World,” Zirin writes about the politics of sports for The Nation and hosts Edge of Sports Radio on Sirius XM.

Ron Jacobs of The Rag Blog called Zirin, “the man who politicized the sports pages,” and The Washington Post described him as “the conscience of American sports writing.” (“They didn’t mean it as a compliment,” Zirin told us with a chuckle.) Christine Brennan of USA Today called Zirin’s Game Over: How Politics Has Turned the Sports World Upside Down, “the perfect book for our time in sports.”

Zirin told the Rag Radio audience that the nature of sports journalism has changed dramatically in recent years. “Unfortunately,” he said, “sports has become such a big business that the line between journalism and being a broadcast partner for all intents and purposes has been obliterated.”

“I don’t think Hunter S. Thompson [who started out as a sportswriter] could have imagined a situation where the best journalists would work for places like the NBA.com, NFL.com, MLB.com.”

Sports journalists need to be watchdogs, he said, because professional sports organizations represent “very powerful multi-billion dollar interests with tentacles in every aspect of our society.”

In discussing his book, Game Over, about how politics has changed sports, Zirin says that “politics have always been a part of sports,” but that things changed dramatically after the economic crisis of 2008. The owners, he says, “were freaking out about the loss of public subsidies which they had gotten used to over the last 20 years… And so they’re trying to figure out a way to restore profitability.”

“When owners lock out players,” he pointed out, “they’re also locking out everybody that works in the parking lot, who works in the stadium, all the waiters and waitresses picking up an extra shift at the restaurants. And when you think that it’s our billions of dollars that go into building these stadiums… they’re not just locking out the players. They’re locking out all of us.”

When people ask him who his favorite sports owners are, “I always say, the Green Bay Packers. They’re the best 200,000 owners in sports. That’s a fan-owned team. And the difference is profound in terms of the relationship between the team and the community. The difference between a nonprofit that puts money back into the community, and a sponge that sucks money and resources out of the community.”

About violence in professional football, Zirin said that “trying to curb head injuries in the NFL is basically like trying to make a safe cigarette.” “It’s such a dangerous, violent game that your next play can always be your last, so they dehumanize the players. They don’t want you to get attached to them…” Players are “quickly ferried off the sidelines if they get hurt, brought to some back room so you don’t actually have to see the effect of the injuries…”

“You can’t really separate football from the violence,” he says, but he believes there are things that can be done, “like maybe having certified medical concussion experts on every single sideline in the NFL.” “One player said to me, ‘You’ll know the NFL is serious when they propose reforms that actually cost them money.'”

Zirin is very critical of the hypocritical way major league baseball has handled the steroids issue. “It was either a situation of malign neglect or malignant intent,” he says. With “owners happily looking the other way, to make sure that the home runs would keep getting hit, the fans would keep coming to the park, and the game would keep growing.”

He is also critical of the baseball writers who are keeping deserving players like Jeff Bagwell — “anybody who has a whiff of rumor about them” — out of the Hall of Fame. “It is guilt by association, guilt by rumor, and guilt by innuendo,” he said, and smacks of Joe McCarthy.

Zirin discussed the story of Houston Rockets rookie Royce White who suffers from a severe anxiety disorder and has been “battling with the Rockets over how they would deal with his mental health.” As Zirin wrote in an article run on The Rag Blog, “For months, the 21-year-old has been sitting out the season in protest: a rebel with a cause.” “White has become a crusader for change,” he wrote, “calling out the NBA for disregarding mental illness and treating him like ‘a commodity.'”

Zirin told the Rag Radio audience that White “has developed quite the radical consciousness. Just by standing up and just by the abuse he’s taken.” White “did an interview with ESPN and he said that the majority of players in the NBA are mentally ill,” but that they self-medicate with alcohol and drugs.

“Mental health issues are nearly taboo to talk about in the world of sports,” Zirin says. It’s only “in recent years that players have begun to come out of this particular closet.”

He talked about a major study out of the Tucker Center at the University of Minnesota that asked the question, “Does sex — and I think we can more appropriately say, sexism — sell women’s sports? Are people more likely to watch women’s sports when women athletes dress up in certain ways?”

“They did this massive research project on this issue, interviewing tens of thousands of people, and what they came up with was that sexism actually hurts women’s sports. It makes people less likely to consume women’s sports.”

Zirin says that the LGBT movement has had a major impact on the sports world and he believes that there are gay athletes in pro sports who are on the verge of coming out publicly.

In an article about the recent rape trial involving football players at Steubenville High School in Ohio, Zirin pointed to “the bond between jock culture and rape culture.” 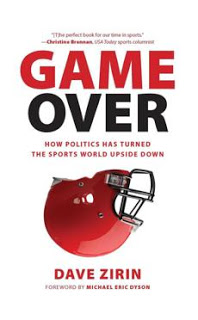 He told the Rag Radio audience: “I think that there is a connection. I think that men’s sports, with its combination of hero worship, of an emphasis on team and of men looking out for each other, and oftentimes looking at women as the spoils of being an athlete, can create a culture where women are seen as objects and where women can be seen as something to be taken.”

Zirin says that, “When you have a town like Steubenville, which is a town of 18,000 people, yet the stadium holds 10,000, When you have a school that’s been refurbished… and everybody walks around and says, ‘that’s because of Big Red football, that we got this money,’ and these kids walk around and adults kiss their butts, I think that’s a recipe for disaster.”

The problem, he says, is hero worship. And, as with the scandal at Penn State, “When a football team becomes the emotional, the economic, the cultural, and the social center of a community, the priorities spin out of whack dramatically.”

The worse thing about Stuebenville, he said, was that “there were 50 people who saw what was happening — boys and girls — and they all chose to do nothing.” But, he believes, “with the active intervention of coaches, of adults, that you can actually affect and change rape culture.”

There are a lot of positive things happening in sports, Zirin says. “I love the fact that LeBron James and the Miami Heat actually took a stand when Trayvon Martin was murdered by Robert Zimmerman, the self-appointed neighborhood watch leader. They all posed with their hoods on.”

And “the actions of the Phoenix Suns a couple years back in immigration solidarity, in protest of the horrific immigration laws in the state of Arizona, wearing jerseys that said Los Suns.”

One athlete Zirin admires is Houston Texans running back Arian Foster, who is “incredibly literate and erudite.” Zirin begins his latest book with a quote from Foster: “I heard Jim Brown once say the gladiator can’t change Rome. I love Jim Brown. But I disagree. I’ll die trying, my brother.”

And, Dave Zirin reminds us, we remember Muhammed Ali “because the 1960s were happening outside the boxing ring. And without that context of social struggle you’re not gonna have the athletes who can rise up and meet the moment.”

Winner of Sport in Society and Northeastern University School of Journalism’s 2011 “Excellence in Sports Journalism” Award, Dave Zirin hosts Sirius XM Radio’s popular weekly show, Edge of Sports Radio. He is also a columnist for SLAM Magazine and the Progressive and his articles frequently appear on The Rag Blog.

Zirin is a regular guest on MSNBC, CNN, Amy Goodman’s Democracy Now!, NPR’s All Things Considered, and other major media outlets. His earlier books include the NAACP Image Award-nominated The John Carlos Story, Bad Sports: How Owners are Ruining the Games We Love, and A People’s History of Sports in the United States, part of Howard Zinn’s “People’s History” Series.

Ron Jacobs wrote at The Rag Blog that “Dave Zirin takes on those people and institutions that have crippled sports in the name of profit and power while championing those athletes and others who have used their name and position to make sports a force for change.”

And New York Magazine‘s Will Leitch said that “Dave Zirin, as the years go by, sounds less and less like a politically slanted leftist rabble-rouser and more like the only sumbitch who understands what the hell’s going on.”

Rag Radio has aired since September 2009 on KOOP 91.7-FM, an all-volunteer cooperatively-run community radio station in Austin, Texas. Hosted and produced by Rag Blog editor and long-time alternative journalist Thorne Dreyer, a pioneer of the Sixties underground press movement, Rag Radio is broadcast every Friday from 2-3 p.m. (CDT) on KOOP, and is rebroadcast on Sundays at 10 a.m. (EDT) on WFTE, 90.3-FM in Mt. Cobb, PA, and 105.7-FM in Scranton, PA.