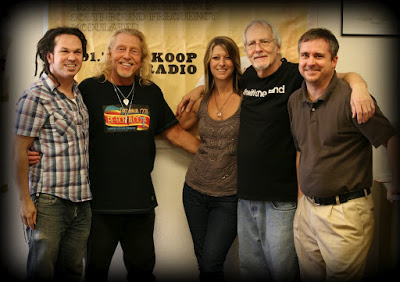 They performed live on the show and discussed their work, the larger music scene, and the relationship between musicians and the community. Listen to the show here.

Rag Radio features hour-long in-depth interviews and discussion about issues of progressive politics, culture, and history. The syndicated show is produced in the studios of KOOP-FM, Austin’s cooperatively-run all-volunteer community radio station. It is broadcast live on KOOP and streamed live on the Internet, and is rebroadcast on WFTE-FM in Mt. Cobb and Scranton, PA.

Bob Cheevers, who has been in the music business since the 60s, was the 2011 Texas Music Awards “Singer/Songwriter of The Year.” An Emmy-winning songwriter, Cheevers’ releases have been in the UK’s Americana Top 10 and in the Top 20 and 30 on the U.S. Americana charts. Austin-based Cheevers grew up in Memphis, has worked in Los Angeles and Nashville, and has toured extensively in the U.S. and Europe. Johnny Cash and Waylon Jennings have recorded his songs.

Noëlle Hampton — a “rootsy/Americana” singer-songwriter and indie rocker — and her husband (and virtuoso guitarist) André Moran are a musical collaboration that began in the San Francisco Bay Area and relocated to Austin where they record and perform. Noëlle and André have opened for Bob Dylan, Sarah McLachlan, Jewel, Pat Benatar, and many others. They also perform as The Belle Sounds.

Bob Cheevers –- through his non-profit Over A Cheevers, Inc. — is producing Be-Bob-Alooza at Austin’s Nutty Brown Café on Sunday, Sept. 30, from 5-10 p.m., with headliners Kevin Welch and Walt Wilkins’ Mystiqueros. It is a benefit with proceeds going to an Austin singer/songwriter to be chosen by a panel of Austin music professionals. Noëlle Hampton and André Moran are contenders for the award.