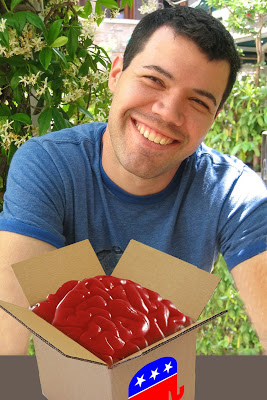 Mooney, who is the author of The Republican Brain: The Science of Why They Deny Science — and Reality, and of the 2005 New York Times bestseller, The Republican War on Science, was Dreyer’s guest Friday, May 4, 2012, on Rag Radio, an hour-long interview show that first airs Friday afternoons on KOOP 91.7-FM — a cooperatively-run community radio station in Austin, Texas — and is rebroadcast Sunday mornings on WFTE-FM in Scranton and Mt. Cobb, PA.

The show is also streamed to a live audience on the Internet by both stations.

You can listen to Rag Radio’s interview with Chris Mooney here.


Scientific American calls Chris Mooney “one of the few journalists in the country who specialize in the now dangerous intersection of science and politics.” Mooney also hosts the “Point of Inquiry” podcast, writes the “Intersection” blog for Science Progress, and has written for Mother Jones, American Prospect, Harper’s, The Washington Post, USA Today, and Slate.

In The Republican Brain, Mooney explores brain scans, polls, and psychology experiments “to explain why conservatives today believe more wrong things; appear more likely than Democrats to oppose new ideas and less likely to change their beliefs in the face of new facts; and sometimes respond to compelling evidence by doubling down on their current beliefs.”

Mooney wrote that, “As I began to investigate the underlying causes for the conservative denial of reality that we see all around us, I found it impossible to ignore a mounting body of evidence — from political science, social psychology, evolutionary psychology, cognitive neuroscience, and genetics — that points to a key conclusion.”

“Political conservatives,” he wrote “seem to be very different from political liberals at the level of psychology and personality. And inevitably, this influences the way the two groups argue and process information.”

“At first I didn’t want to believe this,” Mooney said on Rag Radio, but added that there is now so much research on the “differences between liberals and conservatives” that, “if you start to seep yourself in it, you’ll never really look at politics in the same way again.”

“I used to think that conservatives do what they do because they’re either in hock to corporate America or, you know, it’s just religion,” he said. “I still hear my fellow liberals say, ‘Follow the money,'” Mooney said, acknowledging that environmental factors do play a major role in the development of people’s politics. And there’s a legitimate argument, he says, “that these [personality] traits don’t matter in comparison to the incredible influence of media [and] political polorazition.”

But “there’s just a huge body of research, now,” Mooney said, that backs up the premise of his most recent book. “There can be any number of things wrong with any one study [but] when it works in a lot of different disciplines, when they’re all coalescing on the same information, that’s when you know you’re really not fooling yourself.”

The research is branching into fields like genetics, “which is controversial and drives conservatives absolutely crazy.” That’s because “they misunderstand it,” he says. According to Mooney, current research shows “that something like 40 percent of your political views” appear to be genetically transmitted. “There’s not a Republican gene or a Democrat gene,” he stresses. Just genes “that basically predispose you towards certain traits.”

Mooney said that, while liberals are much more willing to change and “to listen to people who say different things,” conservatives “are the kind of people who want certainty, who want stability, who resist change, who don’t like ambiguity, and who don’t like situations that are grey rather than black and white.”

Mooney says that “you’ve got conservatism, and fundamentalist religion, and authoritarianism — all wrapped up in a ball in the United States. And they’re all closely connected to one another. And I think that the underlying theme is need for certainty, need for closure, need for fixed beliefs…”

“And then, once you’ve got that, you limit your search for information, you try to find information that agrees with you, that makes you feel sure of yourself.” Which has led conservatives — even highly-educated conservatives — to believe things that require “such weird and outlandish rationalization, like global warming denial, that I think you really need a psychological explanation.”

Conservatives tend to be authoritarians, “people who view the world in black and white,” Mooney told the Rag Radio audience. “They think that there’s only two sides, and that they’re on the right side, and that everybody else is on the wrong side.”

And, he pointed out, “conservatives more than liberals view the distinction between what you might call the ‘in group’ and the ‘out group,'” acknowledging that this can result in ethnic prejudice and racial chauvanism. “Oh, absolutely,” he said. “This is the most explosive part of the story.”

According to Mooney, when these conservatives “see someone that’s a different color than them, essentially, they’re more vigilant about their risk, as they perceive it.” “The whole ‘Obama’s a Muslim’ thing, is clearly a kind of xenophobia, as well as misinformation,” he said.

“Liberals,” on the other hand, “test high on a trait called ‘openness to experience,’” he says. “It’s about being willing to try new things, meet new people, try out new ideas.” Liberals “are okay with nuance and complexity and sort of taking a lot of time seeing the pattern.”

One of the most consistent themes the researchers have found “has to do with this relationship between conservativism and fear. And it’s not just that they’re cowering in their boots. It’s more like they’re kind of militaristic in the sense that they’re searching around the environment for threats, and trying to be ready, trying to be vigilant, so that they can defend themselves.”

The conservatives interpret his work “as an attack on them,” Mooney says, “even though a lot of this research makes them look good and makes liberals look really undisciplined and not very good at politics.” In an article titled “The Republican Brain on ‘The Republican Brain’,” written for Truthout and also published on The Rag Blog, Mooney reported that “even before the book was out, conservatives were attacking it without reading it.”

In the article he describes how the National Review previously attacked a study “on the psychological underpinnings of political ideology” by calling it the “Conservatives are Crazy” study. “But,” Mooney said, “the study did not ever assert that conservatives are crazy or claim anything of the kind.”

His favorite reaction to that study came from right-wing doyenne Ann Coulter who said, “Whenever you have backed a liberal into a corner — if he doesn’t start crying — he says, ‘It’s a complicated issue.’ Loving America is too simple an emotion. To be nuanced you have to hate it a little. Conservatives may not grasp ‘nuance,’ but we’re pretty good at grasping treason.”

“That’s a hilarious passage,” he chuckles, “because she’s writing about nuance without nuance. And her idea of nuance, you know, is that you either love America or you hate it.”

Mooney claims he’s not saying that conservatives are dumb or crazy. “There’s enough evidence now to say that we can link liberals and conservatives broadly to a set of strategies, both of which look like they should make evolutionary sense,” he says, and that “liberalism and conservatism essentially reflect strategies for dealing with reality.”

In fact, Mooney says liberals may have something to learn from conservatives, especially in the political arena. “Conservatives have got this great strength of unity and shared purpose,” he says. “And I would say, lets try to figure out how we can be more unified. Let’s follow the conservatives, not in substance, but in style a little bit.”

Liberals “need to get out of that habit of tearing each other to pieces over these little differences,” he says. And we need “leaders who understand that those [differences] are not what matter.”

Mooney suggests that liberals might take the advice of Yoda, the wizened old Jedi Master from Star Wars, who said, “‘You must unlearn what you’ve learned.’

“I’m supporting Yoda on this,” Mooney told us.