Singer/songwriter David Rovics on Rag Radio, Friday, June 1, 2012. Video produced and edited by Jeff Zavala and filmed by Grace Alfar of ZGraphix at the KOOP studios in Austin.

You can listen to it here:

His essays have been published on CounterPunch and Truthout, and the 200-plus songs he makes available for free on the web have been downloaded more than a million times.

Rovics grew up in a family of classical musicians in Wilton, Connecticut. By the early 90’s he was a full-time “busker,” performing in the Boston subways, and by the mid-90’s he was traveling the world as a “professional flat-picking rabble-rouser.”

Amy Goodman called David Rovics “the musical version of Democracy Now!” And Andy Kershaw of the BBC said, “If the great Phil Ochs were to rise from the dead today, he would probably be hailed as the new Daivd Rovics.”

On Rag Radio, Rovics discussed his career and his commitment to social activism, and the relationship between his politics and his art. Rovics, who became involved in the anti-nuclear movement when he was 12, says of his work: “I’m doing what songwriters have been doing for millenia — which is writing songs about what’s happening in the world.”

We also covered subjects ranging from the power (and limitations) of computer technology (and why Rovics makes his work available online for free), why he doesn’t call himself a “protest singer” (“a white guy with an acoustic guitar”), and the inherent politics of punk rock, which evolved as a response to the highly polished “guitar gods.” (Punk was like rock and roll at its most basic, he said: “Three chords and the truth.”)

And we talked about Rovics’ recent trip to Europe where he toured from Scotland and Ireland to Germany and Scandanavia, playing before crowds ranging from the single digits to the hundreds, in venues with names like the Wee Folk Club and Filthy McNasty’s, in school classrooms and at mass political rallies — including the May Day festivities in Denmark.

In Belfast, he performed in an occupied bank building with legendary Irish singer and activist Tommy Sands, and he did a show with squatters in a dilapidated old building in Amsterdam. And he played at a protest against a coal mine in rural Cologne, where his contact, he laughs, was “a young man on a bicycle wearing a pink skirt.”

Rovics, who played at more than 30 Occupy Wall Street camps around the country, says he thinks the Occupy Movement “changed the whole scope of the discussion in the mainstream media” about power and wealth in the country.

About the political scene today, Rovics, who calls himself a “libertarian socialist,” told the Rag Radio audience that “both political parties are almost entirely bought and sold by the banks and oil companies. And the banks and oil companies are duking it out to figure out who can dominate the world.” He says we face a choice “between a corrupt Democratic Party and an absolutely lunatic — and corrupt — Republican Party.”

Rovics calls our current options “dismal,” and says that our only real solution is to build a mass movement for social change outside the political system.

Find out more about David Rovics — and download free music — at DavidRovics.com. 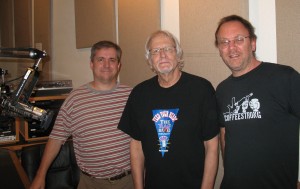 [Thorne Dreyer edits The Rag Blog, hosts Rag Radio, and is a director of the New Journalism Project. He can be contacted at editor@theragblog.com. Read more articles by and about Thorne Dreyer on The Rag Blog.]