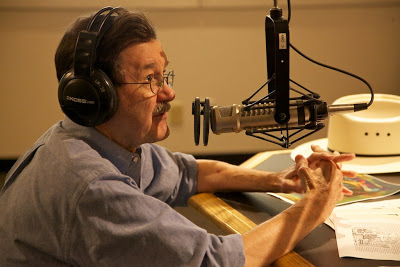 Jim Hightower will headline a “Spring Song Fiesta” at Scholz Beer Garten in Austin on Sunday, April 15, from 1-9 p.m. Hightower will speak at 7, following a live KOOP-sponsored debate among Austin mayoral candidates starting at 6. Bands will include the Therapy Sisters, Paper Moon Shiners, Bill Oliver, Son y No Son, Barbara K, Floyd Domino, and Ted Roddy and the Hit Kickers. It all benefits community radio KOOP-FM.

According to Jim Hightower, “even the smallest dog can lift its leg on the tallest building.”

Progressive Texas populist author, commentator, and orator Hightower — perhaps our country’s most celebrated champion of the common folk — was our guest on Rag Radio, Friday, April 6, on Austin’s community radio station, KOOP 91.7-FM, and streamed live on the Internet.


We discussed populism as a political movement — and what Jim Hightower sees as a “populist moment” existing in this country today.

“Populism is about confronting money and power in our society and realizing that too few people control too much money,” Hightower told the Rag Radio audience. “The few are doing extremely well, but they seem to think that they can separate their well-being from the good fortunes of the many.”

Hightower, who served two terms as Texas Agriculture Commissioner, is a New York Times bestselling author. His weekly newsletter, the Hightower Lowdown, goes out to 135,000 subscribers, he writes a weekly newspaper column for Creators Syndicate, and his radio commentaries air on stations around the country, including Austin’s KOOP.

A former editor of the Texas Observer, Hightower has been involved in progressive politics for decades and has established himself as one of the country’s most influential consumer advocates, especially focusing on corporate power in the food economy.

Jim Hightower’s latest book is Swim Against the Current: Even a Dead Fish Can Go With the Flow.

The show is broadcast on Austin’s KOOP 91.7-FM, a cooperatively-run community radio station, on Fridays, 2-3 p.m. (CST) and is rebroadcast on WFTE-FM in Mt. Cobb and Scranton, PA, on Sundays at 10 a.m. (EST). It also has a widespread internet audience and podcasts of all shows can be downloaded at the Internet Archive.

He says that the Wall Street bailout “was the initial spark for the Tea Party movement,” but that it got captured by former Texas Congressman and Koch-funded Washington lobbyist Dick Armey, and was turned into a “right-wing hugging organization.”

But Hightower believes that the Occupy movement could connect with the Tea Party rank and file, and “turn into something real, something that does try to decentralize power down to the grassroots level for ordinary working people.”

He sees lots of things going on in the country that make him hopeful.

He believes that all the Republican anti-union activity has reinvigorated the labor movement. AFL-CIO head Richard Trumka “declared that he was going to make [Wisconsin Gov.] Scott Walker the ‘organizer of the year.’” All the anti-union rhetoric “has given them their own sense of history back, and their own spirit back, and the recognition that the public is with them.”

Hightower spoke before 150,000 people in 20-degree weather last February in Madison, at a rally opposing the Wisconsin anti-union legislation. There were people “just as far as you could see.”

“It was just a beautiful, spirited moment.”

And he sees more positive signs.

People are working on a grassroots level for a “bevy of new and good candidates running for office all across the country” — like Elizabeth Warren in Massachusetts, Tammy Baldwin in Wisconsin, Norman Solomon in Northern California, and Eric Griego in Albuquerque — and to overturn Citizens United (“the grotesque absurdity that a corporation is a person”).

“As we say here,” Hightower reminds us, “a corporation is not a person until Texas executes one.”

“We don’t have to convince people that Citizens United’s unleashing unlimited amounts of secret corporate money into our elections is a bad idea.”

“There’s a movement, and the Occupy people are involved in this, to confront every candidate for every office in the country, at their public forums… at their political rallies… or just go to their office, and say, ‘Do you think a corporation is a person? We want you on record.” 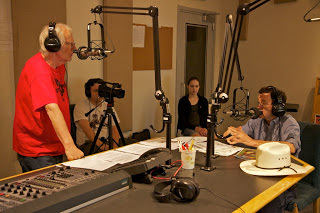 Hightower also believes that the fast-growing coop movement “is extraordinary in this country [and] there’s very little coverage of it.”

“[It gives us] models that we can go to… and say, here’s another way to organize it. It doesn’t have to be the CEO getting $50 million a year and workers having their wages knocked down and their health care and other benefits taken away.”

Another — and related — area of encouraging activity, Hightower said, is in the food economy. “We’ve had a revolution in food in America… It came from farmers saying, there’s gotta be a better way than all these pesticides… and making bad food and poisoning our animals and genetically manipulating our animals.”

And the consumers are saying, “We don’t like industrialized, conglomeratized, globalized, capitalized food. We want real food.”

“And the two found each other.”

“It began with ex-hippies selling bad tomatoes out of broken-down VW buses in the 70’s.” But then came the food coops and the farmers’ markets. “We helped to establish more than 100 of them [in Texas], just by putting the tools in the hands of local people.”

“It’s a tremendous movement,” he says. In Austin, “we have a dozen farms… linking up with chefs and linking up directly with restaurants and directly with government institutions to buy food.”

Privatization and the commons

An issue that Jim Hightower is especially concerned about is the alarming spread of privatization and the resulting impact on the public sector, on the commons.

He has recently written in his Hightower Lowdown about the move to privatize the post office, about the “corporate foreign legion” that “has taken over America’s intelligence and military functions,” and about the closing of state parks around the country. (“By axing parks, politicos are stealing the people’s property,” he wrote.)

They’re saying that the post office is “wasteful, they’re broke, they’re bankrupt… and that they can’t compete with the internet and Fedex, etc… Well, as we say out in Lubbock, that’s bovine excrement. The post office last year had… an operating profit of 700 million dollars.”

“They get the job done.”

“And it is the most popular federal agency in all of government. People feel an attachment to their post office… because it is a community center.”

Hightower says that the move to privatize parks is happening all over the country.

“The workaday people… don’t fly to Aspen when they need a weekend. They don’t summer in France. They go to their parks.”

“These parks are jewels. And yet, we’re abandoning them. [Gov. Rick] Perry and the legislature just whacked the hell out of them” in Texas. The state parks director has been forced to make public appeals for support of the park system. “We’re out there with a tin cup on the side of the street saying, anybody got a nickel for a state park?”

“It’s a complete abdication of long-term responsibility to the people of this state and future generations.”

He says he was “stunned” when he researched the issue for the Hightower Lowdown. “I had no idea it was this big, this extensive.”

“We have roughly 80,000 troops in Afghanistan. And now we’ve got 113,00 contractors… And they’re not there just to do administrative chores. They’re doing war planning, they are targeting the enemy, they are killing.”

Hightower says we are giving up “the government’s most sensitive activities to corporations” whose “loyalty is not to the United States of America. It is to the bottom line, to the profit of the shareholders.”

Texas and the populist movement

Jim Hightower reminded Rag Radio listeners that the populist movement actually started in Texas — in Lampasas — “with four farmers sitting around a kitchen table over there in 1868, saying, this is killing us — [with] the railroad monopolies, and the bankers putting the squeeze on them.”

“They had to find some other way.”

“So they established what became the Farmers Alliance.” It failed at first but eventually, it “spread through Texas, all up through the Plains states, went through the South, went all the way to New York State, all the way out to California.”

“They created cooperatives, the financing mechanisms so farmers could get capital without being gouged by the banks, and then a holding mechanism for their crops, storage facilities, so that they could be in charge. And then a market mechanism.”

“And all of it was cooperatively-run.”

“And it was also a cultural movement,” Hightower added. “Because rural people were illiterate. They didn’t know how to write. They hadn’t read history. So they had educational courses, they had cultural programs, they created choirs, and concerts, and they had parades, and fun.

“Everybody could join it. And ‘everybody’ included African-Americns. Back in that day, in the 1870s.”

“It was a huge people’s movement.”

“In fact, Thorne, the original Texas constitution outlawed banks… They hated ‘em. Because we were settled by debtors, people fleeing out of Tennessee and Alabama and Mississippi.”

We concluded by asking Jim Hightower if he plans to ever run for office again.

His firm “No” came with a satisfied smile. He’s having too much fun just being Jim Hightower.

Rag Radio is produced in the KOOP studios, in association with The Rag Blog, a progressive internet newsmagazine, and the New Journalism Project, a Texas 501(c)(3) nonprofit corporation.