Rage Against the Machine : Diebold and the Massachusetts Election 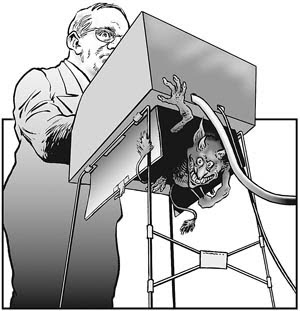 Illustration by Doug Potter / The Austin Chronicle.
Hacking the vote:
Will Diebold steal the Senate?

As Bay Staters vote to fill Ted Kennedy’s Senate seat, most will be marking scantron ballots to be run through easily hackable electronic counters made by Diebold/Premier.

The same types of machines that helped put George W. Bush in the White House in 2000, and “reelect” him in 2004, may now decide who wins the all-important “60th Senate seat” in Massachusetts. The fate of health care and much much more hang in the balance.

As Bay Staters vote to fill Ted Kennedy’s Senate seat, most will be marking scantron ballots to be run through easily hackable electronic counters made by Diebold/Premier.

A paper ballot of sorts does come through these machines. But the count they generated was seriously compromised in the Florida 2000 election that put George W. Bush in the White House. Similar machines played a critical role skewing the Ohio 2004 vote count to fraudulently reelect him.

The Free Press also found that on optiscan machines in Miami County, Ohio the reported totals were significantly higher than the actual number of people who signed in to vote.

Ironically, the cheated candidate in that election was Massachusetts’ now-senior Senator John Kerry. Kerry is circulating email appeals warning that this election is a “jump ball” in which “shady right-wing organizations and out of state conservatives have descended upon the state in droves.”

But Kerry himself has infamously said nothing about the theft of the 2004 election. Neither he, the Democratic Party, nor the Obama Administration have done anything to change a system in which elections can be stolen by the very well-funded Republican-owned companies that make and administer the vote-counting machines. A dozen election protection groups from around the country have now issued an “orange alert” warning that the Massachusetts vote count could be “ripe for manipulation.”

Thus Kerry’s new colleague could be “selected” by the same means that deprived him of the White House.

According to Selectman Dan Keller of the western town of Wendell, some Massachusetts communities — including his — do have hand-counted paper ballots.

But most of the state relies on Diebold scantron counters which can be manipulated in numerous ways, including by switching calibrations and moving ballots from precinct-to-precinct or county-to-county, thus reversing intended votes from one candidate to another.

According to Brad Friedman at BradBlog LHS Associates sells and services many of the machines being used in this special election. Though the vast majority of elected officials in Massachusetts are Democrats, control of the vote count can be a grey area where voting machines are involved, especially given Sen. Kerry’s six-year stupor over the stolen 2004 election, a record of inaction amply matched by the Democratic Party and Obama Administration.

According to Friedman, LHS “has admitted to illegally tampering with memory cards during elections,” and has a Director of Sales and Marketing who has been “barred from Connecticut by their Secretary of State.”

The stakes in this election cannot be overstated. The deceased Senator Kennedy’s seat holds the key to a filibuster-breaking 60-seat Democratic majority in the Senate. State Attorney-General Martha Coakley, the Democratic candidate, is a supporter of the Obama health care plan, and an opponent of atomic power.

Poll results differ substantially as the campaign winds down, but all show a close race. Thus Diebold, a thoroughly tainted player with deep Republican roots, could hold the key to the election by shifting the outcome in just a few key precincts.

After internet-based reporting broke the story of the stolen 2004 election, thousands of election-protection activists turned out to monitor the 2008 vote count. Among other things, careful exit polling was done to provide a close reality check on official vote counts. Poll monitors interviewed voters and carefully scrutinized voting procedures and how ballots were handled and counted.

Often overlooked are voter registration manipulations, which were used in Ohio and elsewhere to strip hundreds of thousands of voters of their right to cast a ballot. In Ohio alone, more than 300,000 legally registered voters were electronically removed from the voter rolls between the 2000 and 2004 elections. Most were in heavily Democratic urban areas.

In 2008, the Free Press found that the number of purged Ohio voters jumped to more than a million.

Thus the fact that the electoral apparatus in Massachusetts is apparently in the hands of Democrats may not matter. Private vendors like LHS and Diebold have the actual control over the final numbers.

In Massachusetts, a recount only occurs if the final results are less than half of one percent, and as election reform activist John Bonifaz points out, Massachusetts does not require random audits of the computerized vote counting machines to compare the computer results to the optical scan ballots marked by the voters. Bonifaz notes that in the Al Franken-Norm Coleman Minnesota Senate race in 2008, “everything was ultimately hand-counted.” The problem in Massachusetts hinges on whether the race is close enough to trigger a recount, which candidates can petition for within 30 days.

“Could the exit poll have been that badly off? Or could a large number of ballots, 200,000 or so, have been swapped out before the recount? Here is where the chain of custody, or lack thereof, comes in. These ballots were not exactly under heavy surveillance during the month-long period between election day and recount completion,” Simon said.

What will matter in Massachusetts is how thoroughly election-protection advocates are able to scrutinize voter certification, access, and ballot security. Billions of dollars — and much more — are riding on the outcome of this election. Those who believe it cannot or would not be stolen are simply in denial.

Given the Democratic party’s astonishing lack of leadership on so many issues, it is entirely possible that Scott Brown could legitimately beat Martha Coakley in this election.

But it is also possible that the outcome could be manipulated by the companies in control of the registration rolls and vote counts. It will be up to citizen election protection activists to make sure that doesn’t happen yet again.

[Bob Fitrakis and Harvey Wasserman broke many of the major stories surrounding the theft of the 2004 election, and have co-authored four books on election protection, which appear at www.freepress.org, where they are publisher and senior editor, and where this story also appears.]

4 Responses to Rage Against the Machine : Diebold and the Massachusetts Election