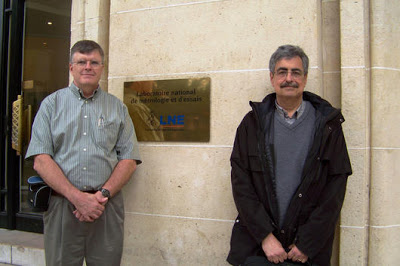 L. F. Eason III, left, with Dr. Richard Davis of the International Bureau of Weights and Measures, standing in front of the French National Measurement Institute.

A white state employee of 21 years refused to lower the flag to half-mast because, he said, Helms was a racist. The poor man was forced to retire.

I was inspired by the man’s defiance.

He quit rather than lower flag for Helms
Ryan Teague Beckwith / July 9, 2008

RALEIGH – L.F. Eason III gave up the only job he’d ever had rather than lower a flag to honor former U.S. Sen. Jesse Helms.

Eason, a 29-year veteran of the state Department of Agriculture, instructed his staff at a small Raleigh lab not to fly the U.S. or North Carolina flags at half-staff Monday, as called for in a directive to all state agencies by Gov. Mike Easley.

When a superior ordered the lab to follow the directive, Eason decided to retire rather than pay tribute to Helms. After several hours’ delay, one of Eason’s employees hung the flags at half-staff.

The brouhaha began late Sunday night, when Eason e-mailed eight of his employees in the state standards lab, which calibrates measuring equipment used on things as widely varied as gasoline and hamburgers.

“Regardless of any executive proclamation, I do not want the flags at the North Carolina Standards Laboratory flown at half staff to honor Jesse Helms any time this week,” Eason wrote just after midnight, according to e-mail messages released in response to a public records request.

He told his staff that he did not think it was appropriate to honor Helms because of his “doctrine of negativity, hate, and prejudice” and his opposition to civil rights bills and the federal Martin Luther King Jr. holiday.

Eason said in an interview Tuesday that he did not typically lower the flag himself, but that, as head of the lab, he supervised the technician who did. He also trained new employees on proper flag etiquette, including a one-person folding technique he learned in Boy Scouts.

When the lab opened Monday morning, the flags were not out at all. An employee called Eason’s boss, Stephen Benjamin, who worked in another building in Raleigh. About 10:45 a.m., Benjamin told one of Eason’s co-workers to put the flags at half-staff.

Another of Eason’s superiors later drove by the lab to make sure the flags were up properly.

No one in the Governor’s Office was aware of any time in recent memory when a state employee refused to lower a flag. Brian Long, a spokesman for the Agriculture Department, said Eason’s refusal was unexpected.

“We’ve never had any conversations like that,” he said.

In a string of e-mail messages with his superiors, Eason was told he could either lower the flags or retire effective immediately.

Though he’s only 51, Eason chose to retire, although he pleaded several times to be allowed to stay at the lab. Eason, who had worked for the Agriculture Department since graduating from college, was paid $65,235 a year as the laboratory manager.

Several people, including his wife, argued to Eason that the flags belonged to the state, as did the lab. But Eason said he felt a strong sense of ownership.

Eason and a previous boss had sketched out the building’s rough design on a napkin at the Atlanta airport in 1984 after attending a national conference on weights and measures.

He then worked to get funding for it in the state budget, and he recently helped snag state money to study building another lab.

“I designed and built that lab,” he said. “Even though technically the bricks and mortar belong to the state of North Carolina, I feel very strongly that everything that comes out of there is my responsibility.”

It was not the first time Eason felt uneasy about lowering the flag.

A registered Democrat who frequently votes a split ticket, he said he had no problems lowering the flag for former Sen. Terry Sanford or President Reagan. But he remembers wondering whether he would be willing to lower the flag after President Nixon’s death.

He never had to make that decision, since it rained both days.

Monday was sunny. And Eason was out of a job.

This entry was posted in RagBlog and tagged Congress, Deaths, Racism, Social Action. Bookmark the permalink.