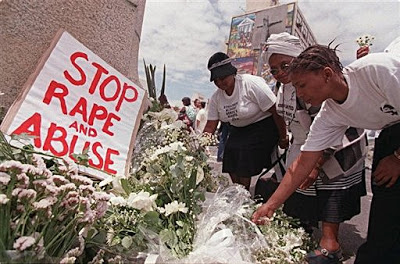 Women place white flowers outside parliament during a demonstration in Cape Town. Photo from AFP.

While the South African numbers may be particularly high, this is a worldwide problem. Men… have been brought up to believe that women are second-class citizens — sometimes little more than property to be used as a man sees fit.

The South African Medical Research Council has just conducted an anonymous survey in that country concering rape, and the results were quite shocking. The survey was conducted in both rural and urban areas and crossed all racial lines. Here is what they found:

Obviously, that country has a serious problem. Professor Rachel Jewkes, who carried out the research, says, “The absolute imperative is we have to change the underlying social attitudes that in a way have created a norm that coercing women into sex is on some level acceptable… it’s partly rooted in our incredibly disturbed past and the way that South African men over the centuries have been socialised into forms of masculinity that are predicated on the idea of being strong and tough and the use of force to assert dominance and control over women, as well as other men.”

Mbuyiselo Botha, from the South African Men’s Forum, which campaigns for women’s rights, agreed, saying, “I think that yes, the figures are that high and for us, for me in particular, that is a very sad state of affairs. It means that we continue in South Africa to be one of the highest capitals of rape in the world. I don’t think it’s cultural per se; I think it has to do with how a lot of us men worldwide were raised. The issues of dominance against women, issues of inequality, are pervasive and you find them throughout the world.”

Botha is right. While the South African numbers may be particularly high, this is a worldwide problem. Men all over the world have been brought up to believe that women are second-class citizens — sometimes little more than property to be used as a man sees fit.

And we in the United States should not be feeling superior to any other country. Although things are slowly beginning to change here, we have a history of relegating women to an inferior status. It was not until well into the twentieth century that most women in America even gained the right to vote.

In fact, the idea of second-class status for women is so pervasive that it has even been codified by many of America’s religious institutions. And this is true in all religions (with the possible exception of some modern pagan sects), including christianity. It is not uncommon to hear ministers and priests telling women to be obedient to their husbands, and denying them leadership positions in the church.

As long as this type of thinking occurs, as long as women are relegated to an inferior status in our institutions and in our society, rape will continue to be a problem. And America does have a serious rape problem. Consider some of our own statistics:

Those statistics may not be as high as South Africa’s, but they are just as unacceptable. We preach gender equality in this country, but seldom is it practiced. Far too often, women are relegated to second-class status. And if a man believes women are inferior, it is just one more small step to commit and/or justify a rape. That is the true root of the problem.

Too often our society wants to blame rape on things like movies, magazines, music, books, television or the internet. But these things aren’t the cause or the problem. They are merely symptoms of the real problem — the societal treatment of women as being inferior to men.

The only way to stop rape is to start treating and respecting women as equals to men. Of course, those who commit the rapes must be punished, but this alone will not solve the problem. We must stop mouthing the word equality and make it a reality.