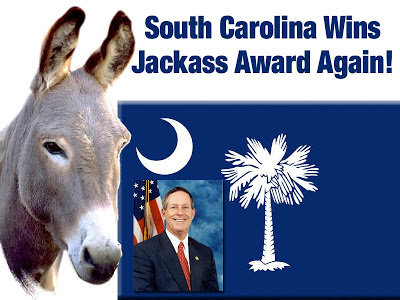 Wilson made a beeline out of the House chamber immediately after the end of the President’s speech. He must have had a political epiphany and decided to apologize…

When Hugh de Veaux Wilson and Wray Graves Wilson looked at their newborn that July 31, 1947, they knew he was destined for national recognition. They named him Addison Graves Wilson, Sr., but everyone just called him Joe. The crescent moon in the South Carolina flag was his teething ring as he started a career as a conservative Republican. As a teenager he worked on Congressman Floyd Spence’s campaign, and later as as aide to segregationist Senator Strom Thurmond. Joe is a product of South Carolina, and became a U.S. Congressman to represent his state in 2001.

And he did make history last night, stunning a jam-packed joint meeting of both houses in the House chamber as well as millions of TV viewers as he bellowed “You Lie!” as President Obama was delivering his major address on health care reform.

Good old Joe made history because as far as anyone could determine, no one had ever exhibited such crass disrespect for the President of the United States during a presidential address.

Shouting out a crude epitaph in a routine session of the House of Representatives is grounds for a formal reprimand. So what was Joe thinking?

Not quite a year after Joe Wilson became a congressman, during a September 2002 debate on going to war in Iraq, Wilson called Congressman Bob Filner “viscerally anti-American.” During the debate, Filner suggested the United States supplied chemical and biological weapons to Saddam Hussein and Joe exploded that Filner had a “hatred of America.” Joe said later that he “didn’t intend to insult Filner.”

White House Chief of Staff, Rahm Emanuel, was sitting just a few rows in front of Congressman Wilson when he hurled his insult at his boss, the President. Emanuel reportedly made it very clear to Republican leaders that the congressman doing the shouting be identified and issue an apology immediately, noting that “No president has ever been treated like that. Ever.”

Wilson made a beeline out of the House chamber immediately after the end of the President’s speech. He must have had a political epiphany and decided to apologize, just like he had to fellow congressman Filner, by calling the President, to maybe again say “I didn’t mean to insult you.”

Rahm Emmanuel took the call and accepted Joe’s apology on behalf of the president. A formal letter of apology was hastily issued from Wilson’s congressional office but it clearly shows Joe’s wrong-headed hubris. While the letter apologized for “a lack of civility,” it also pointed out that, “While I disagree with the president’s statement, my comments were inappropriate…”

This is actually a classic example of the “flipped conservative lie” where a clearly established fact, is ballyhooed to constituents back home as being just the opposite. It is classic GOP “government is lying to you so we gotta fight this” political trickery.

“While I disagree with the president’s statement…” is Joe’s way of continuing to maintain the President is lying to you because Joe wants so badly to believe that his real lie, instead, is true.

In this case the President of the United States was categorically clearing up a totally false Republican claim that illegal immigrants would be provided free health care under a new health care reform bill. Joe’s ingrained demagoguery automatically made him shout “You lie!” For that instant he forgot he was not in a chummy, fired up town hall meeting in South Carolina, but that he was seated among his peers and his president was debunking a large Republican lie.

So, lets look at this. The president unambiguously declares that the illegal immigrants free health care rumor is false. Joe says he “disagrees” with the president… meaning that somehow Joe is convinced the illegals are going to get free health care no matter what the president or anyone else says. That Barack Hussein Obama is the president, calm, collected, and much bigger than a sputtering, defeated southern white man might be part of what is going on here.

“Did y’all hear Congressman Joe Wilson stand up and yell ‘You lie!’ to Obama tonight when he said illegal aliens won’t get covered under government health care? It was clearly audible on the television and it made the Dalai Bama pause for a second or two. It’s already hit YouTube. The look on Pelosi’s face is priceless too.”

Yeah, we all heard it, millions of us, and so did your “Dali Bama.” In fact, we’ve all had more than an earful of “Carolina Politics.” Your romance novel, philandering governor holds the South Carolina Jackass Award. Y’all also got all that rumor-mongering betting Governor Sanford’s GOP buddies will not impeach him out of fear of putting a supposedly gay man in his place. That is hard to top, but now Congressman Joe calls the POTUS a liar, in prime time, and takes top jackass spot for a while. Y’all are in a big steamed up glass house. Time to quit throwing rocks, and worry about our country’s real problems don’t you think?

FOLLOW UP: People wanting to leave their thoughts about Rep. Joe Wilson on his Capitol Hill web site are getting this notice after clicking “Contact Us.” Joe really connected with America it seems. And lots of them would like to have a piece of his red neck. 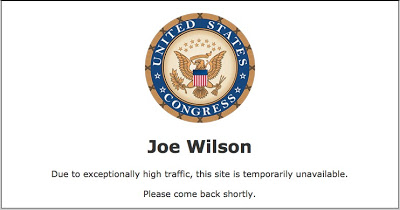 13 Responses to Raving Joe Wilson : The Pride of South Carolina!