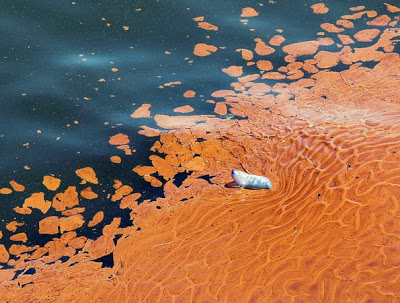 Given the other threats currently menacing planet Earth and its so-called civilization, this oil-gash disaster ought to qualify as the ultimate wake-up call to citizen outrage and mass sustained political action…

The recent explosion of the offshore oil rig in the Gulf of Mexico promises to become, in my view, the gravest man-made environmental catastrophe since the U.S. rained nuclear death on Hiroshima and Nagasaki in 1945, with Chernobyl and Exxon Valdez bringing up the rear.

Experts are straining to formulate likely scenarios for the subsequent “oil spill,” which is actually a gusher on the ocean floor that is spewing an estimated 5,000 barrels of crude per day. The images we’re seeing of the oil already on the surface of the water are ugly and infuriating, and they’re going to get more so.

Given the other threats currently menacing planet Earth and its so-called civilization, this oil-gash disaster ought to qualify as the ultimate wake-up call to citizen outrage and mass sustained political action, indeed to revolution. Likewise, the blown-up oil rig, under lease to British Petroleum, ought to be studied as a perfect paradigm of the agents at work in the looming demolition of life as we know it in the biosphere.

I speak of the agents of “post-industrial” capitalism and globalization in relentless pursuit of economic expansion and further profit for the corporate elite.

No strategy, no technology, regardless of the risk, is off-limits to these operators and their allies in government, so long as said strategies lead to more profit. That’s why we’re seeing higher-risk oil exploration and production in deep-sea fields where it wasn’t profitable to drill before, i.e. before the advent of Peak Oil, i.e. declining conventional reserves, with corresponding increases in the price of petroleum.

That’s why we’re suffering a clamor for “clean coal” and a return to fashion of nuclear power plants, both of which are riddled with lethal long-term environmental problems that cannot be resolved.

In an honest, soul-searching, intelligent social order, these advanced assaults on the survivability of the planet, certainly including its Homo sapiens species, would trigger a global mass movement toward the revolution above mentioned, a movement demanding the radical reorganization of human society based on the principle, above all, of infinite sustainability of the planet and its biosphere.

That’s a daunting phrase, I know. It means taking the longest conceivable view of the future of the biosphere. It means asking and trying to answer a question that is oddly unimaginable to most people even of generally good faith, even to my fellow progressives, much less to corporate masters of the universe like those we might find in the executive suites of British Petroleum, Goldman Sachs, et. al.

The question is this. What must the citizens of the planet do to ensure the survival and well-being of the natural environment — which of course is their habitat — not just for centuries into the future, not just for millennia, but for the hundreds of millions of years still remaining to life on Earth before it expires in the furnace of the “red giant” phase of a dying sun?

As preposterous as this question will seem to many, it seems more preposterous to me to evade it, to laugh it off as unanswerable and therefore ridiculous. Each generation of Homo sapiens inhabiting the planet has a sacred responsibility to protect and indeed to enhance it — not only for the well-being of that generation but for all the generations of Homo sapiens and all the generations of all the other species yet to follow.

To evade the question of how to accomplish that is an abrogation of the moral and spiritual imperative that alone gives meaning to our existence as human beings in the first place.

It’s not terribly difficult, after all, to visualize the global society that would have to be established to ensure the perpetual well-being of the biosphere. It’s a matter of simple, elementary logic, like, duh, why didn’t we think of that before?

The basic objectives are cut-and-dried: (1) maximize efficiency in the production and distribution of life-support resources; (2) minimize waste; (3) do absolutely nothing to exceed the natural carrying capacity of the geographic area under consideration, from the local to the bioregional to the continental and finally the global.

In practice this would mean, at the macro level, an abandonment of the capitalist demand for constant economic growth in pursuit of constant growth in profit. We would turn rather to the cultivation of steady-state economies, with an emphasis not on profit but on local and regional production of life-support commodities for local and regional consumption.

The giant teeming cities and their rings upon rings of exurban subdivisions and freeways to nowhere would gradually be replaced by a new geography of small to mid-size cities and towns that function primarily as market and processing centers for the rings of family and community farms that supply them.

At every turn, we would strive for the highest possible degree of local and regional self-reliance, thus to minimize fuel-burning imports, among other virtues, including full employment in a necessarily labor-intensive economy. We would also strive to eliminate or at least minimize the use of the automobile as the dominant form of personal mobility, opting instead for trains and buses, trolleys and trams, bicycles, horses and shoe leather.

We would be a sociable society, learning to travel and interact with each other again, and learning we like it. We would be a stable society, too, with strict controls on population growth, aiming to reduce the global total from seven billion — which is where we are now, which is utterly unsustainable — to one billion, say, which is where we were at the turn of the 20th century.

These ideas are hardly original with me. No small number of conscientious people and organizations in the U.S. and abroad have not only visualized a perpetually sustainable social order but are working today to try to effect it.

One such group is the Center for Maximum Potential Building Systems in Austin, co-directed by Pliny Fisk and Gail Vittori. Another is the Institute for Local Self-Reliance in St. Paul, Minnesota, headed by David Morris.

Still others include TransitionNetwork.org in Totnes, England; Radical Relocalization in Kingston, Ontario; and the World Coalition for Local and Regional Self-Reliance, or WOCO, of whose tiny, nascent, ragtag board I am a founding member.

As for individuals who are focused on sustainability, a pioneer thinker and leading verbal bomb-thrower is James Howard Kunstler, author of The Long Emergency, a now-classic text on Peak Oil, and World Made by Hand, a novel set in the post-petroleum era that lies just ahead. Kunstler is much in demand as a speaker. He also maintains a popular blog called Clusterfuck Nation (kunstler.com), where he posts a fresh diatribe every Monday.

A second writer and speaker who has contributed richly to the literature of sustainability is Kirkpatrick Sale, author of Human Scale and Dwellers in the Land, among other works. He is now director of the Middlebury Institute (middleburyinstitute.org), conceived in Vermont, which advocates for dissolution of the American empire through state secession from the union, e.g. a Second Vermont Republic.

Effective as these stalwarts may be, however, they do not trouble the thoughts of the overwhelming majority of the people of the world who need to be reached. Among that majority there is not to be discerned the faintest sign of mass outrage over the BP oil spill catastrophe in the Gulf of Mexico — or any other threat to the biosphere — and certainly no reflex toward revolution.

Why? Because the corporate masters of the universe have long since extended their power and control over not just the physical resources of the planet but indeed over the minds, values, loyalties and habits of the people themselves.

How could we expect the youth of America and Japan, say, to rise in outraged revolt over the Gulf oil spill — its ominous implication for their own futures notwithstanding — while they sit mesmerized in front of their Sony video games? Ditto the American working class, say, mesmerized by the round and round of NASCAR racing and other so-called sports events produced ad nauseum by the corporate masters.

No moral outrage. No revolution. Just a continuation of what Kunstler calls the benighted culture of “Happy Motoring.” This story will not have a happy end.