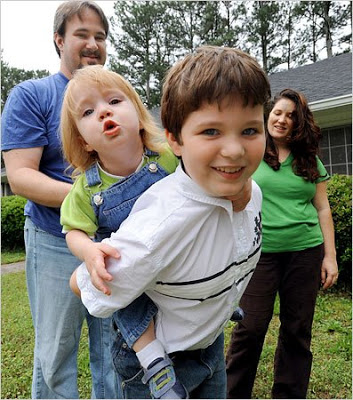 BY her eighth month of pregnancy, Rebecca Sloan, a 35-year-old biologist living in Mountain View, Calif., had read the what-to-expect books, taken the childbirth classes, joined the mommy chat rooms and still had no idea what she was in for. So, like countless expectant mothers before her, Ms. Sloan typed “childbirth” into YouTube’s search engine. Up popped thousands of videos, showing everything from women giving birth under hypnosis, to Caesarean sections, to births in bathtubs.

“I just wanted to see the whole thing,” Ms. Sloan said. And see it she did, compliments of women like Sarah Griffith, a 32-year-old from the Atlanta area who, when she gave birth to her son Bastian, invited her closest friends to join her. One operated the camera, capturing Ms. Griffith’s writhing contractions, the baby’s crowning head and his first cries. Afterward, Ms. Griffith posted an hour of footage on YouTube in nine installments, which have since been watched more than three million times. “Childbirth is beautiful, and I’m not a private person,” Ms. Griffith said.

Mom-and-pop directors like Ms. Griffith think of their home movies as a way to demystify childbirth by showing other women — and their weak-kneed husbands — candid images they might not otherwise see until their contractions begin. If YouTube can illustrate how to solve a Rubik’s Cube, pick a lock and poach an egg, maybe it can also demonstrate how to give birth. Recently, a British couple became tabloid fodder after the woman gave birth, assisted only by her husband using a YouTube birthing video as tutorial.

“Nudity is generally prohibited on YouTube,” said Victoria Grand, the site’s head of policy. “But we make exceptions for videos that are educational, documentary or scientific.” YouTube employees regularly review graphic videos and, depending on the content, may decide to leave a video up, restrict access to those 18 and older or remove the video altogether. Explicit medical videos are among the exceptions, allowing cyberpatients and other viewers 18 and over to watch videos of colonoscopies, appendectomies and open-heart surgery. Most childbirth videos are age restricted.

At first Ms. Sloan says she felt timid watching. She remembers one video featuring a couple speaking Dutch or German in which the man embraced the woman gently from behind while she crouched and swayed. Soon, Ms. Sloan was in tears. “It was really moving,” she said. “The videos are so unsensational, they’re largely unedited and people aren’t making money off of their videos. And so the purpose seems very genuine.”

Women logging onto YouTube to watch birth is a natural inclination, said Eugene Declercq, a professor at the Boston University School of Public Health. “A hundred and fifty years ago women viewed birth on a pretty regular basis — they saw their sisters or neighbors giving birth,” he said, adding that it wasn’t until the late 19th century that birthing moved out of living rooms and bedrooms and into hospitals. “But now, with YouTube, we’ve come back around and women have this opportunity to view births again.”

Every day Ms. Griffith signs into YouTube to answer comments and questions that viewers post in response to her videos of Bastian’s birth. She says her comments section breaks down like this: excited and apprehensive moms-to-be; a few comments so obscene she refuses to post them; and lastly, comments from those Ms. Griffith calls “repetitive guys.” “They’re always like, ‘Whoa, I’m so glad I’m not a woman,’” she said.

Ms. Griffith’s footage is difficult to watch. Bastian weighed almost 11 pounds at birth, and she did not edit out the close-ups, the screaming, groaning and cussing. “My goal is not to scare anybody,” she said. “But if someone is pregnant and they haven’t wrapped their head around the fact that there is pain involved, then they might want to start.”

The graphic nature of public childbirth videos makes them controversial. In an online forum run by Parenting Magazine, a user recently posted the question, “Mom Debate: Birth Videos on YouTube? What do you think — great, or gross?” Responses split between the gross (“My question is why do these people feel the need to post it on the Internet?!”), and the great (“I think it’s great for moms to see all the different and real ways women give birth”).

Childbirth videos have been screened at birthing classes since the 1970s. But those videos tend to be highly edited, and they can be dated, says Jeanette Schwartz, president of the International Childbirth Education Association, which certifies childbirth class instructors. YouTube videos could change the way classes are taught, Ms. Schwartz said: “This creates a wonderful opportunity to show free, real life, candid videos in a classroom setting.”

The majority of childbirth videos on YouTube are home births, recorded inside living rooms, bedrooms or bathtubs. In the United States, many hospitals and doctors forbid patients to record births because of liability concerns, so few American hospital birth videos appear on YouTube.

The thousands of online childbirth videos, garrulous mommy chat rooms and endless pregnancy blogs are changing the dynamic between pregnant women and their attendant medical professionals.

“The more information you have, the more sources you have, the more informed you are, the better questions you ask,” said Eileen Ehudin Beard, an adviser for the 6,500-member American College of Nurse-Midwives. But videos of complicated or difficult births could be detrimental, Ms. Beard said, especially if they made women more fearful of delivering a baby.

Providence Hogan insists she is “not a YouTube person.” Still, Ms. Hogan, 42, who owns a day spa in Brooklyn, has been logging long hours watching birthing videos in preparation for the August arrival of her second child. If Ms. Hogan’s birth goes as planned (at home in a birthing tub), she intends to have her 7-year-old daughter, Sophia, present. After prescreening videos on YouTube and another site, birthvideos.tk, Ms. Hogan started showing Sophia the less graphic ones.

Eleven months ago in Mountain View, Ms. Sloan recorded the birth of her son, Urban. She says she feels a little squeamish about putting it on YouTube, and she’s not sure what her husband would say. Still, eventually she thinks her video will become one more public testament to the agony and beauty of birth.

“I found it so helpful to see those videos,” Ms. Sloan said, “and I am so grateful to the families that shared them I feel like I want to return the favor.”