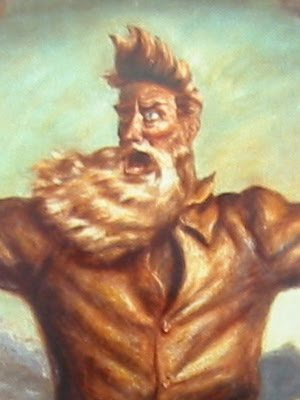 It’s popular to think that the world gets changed by nice people, but the lives of activists past and present tell us otherwise

The question: Is fanaticism always wrong?

John Brown, who was hanged 150 years ago this week, was a religious terrorist. Driven by his unshakable belief in God and his own righteousness, he killed civilians, went on suicide missions, and fomented one of the most terrible and destructive wars in history. Yet his cause was undoubtedly good. Everything he did, he did to abolish slavery; and in the end, he triumphed. The Union armies, singing “John Brown’s body lies a mouldering in his grave,” marched on, together with his soul, through the confederacy until it was crushed and the slaves freed. Looking back at his life and death we are left with an awful question: is fanaticism always wrong?

By fanaticism we usually mean two things. One is that someone is dedicated in the extreme to their cause, belief, or agenda, willing to live and die and maybe kill for it, as John Brown was. The other is that the cause, belief or agenda is not ours, and in 1859 John Brown’s beliefs were not those of most Americans.

No one calls himself or herself a fanatic. It’s what you call people who are weird or threatening, extremists in the defence of something other than your own worldview. I’ve been around activists all my adult life, and though it’s popular to think the world gets changed by delightful people, a lot of the saints and agents of change are obsessive, intransigent, unreasonable, and demanding, of themselves and of us. That’s what it generally takes to change the world.

That slavery was an intolerable evil is something slaves have tended to believe all along; a few free men caught up with them in England in the 1770s, as Adam Hochschild’s wonderful history Bury the Chains relates, and that handful of Quakers and dissenters persevered until they won, half a century later. I am not so sure about John Brown’s means, or that his actions were necessary to start a war that was already brewing, but I am sure that slavery needed to be abolished, and that his general ends were good.

The really interesting thing is that in 1839 to be against slavery in the U.S. was a disruptive, extreme position, often seen as an attack on property rights rather than a defence of human rights. Half a century later we held those truths to be self-evident that no one should own anyone else. (Except husbands owning wives, but that’s another story that got revised in the 1970s and 1980s when things like domestic violence came to be taken seriously by the legal system of many countries. Sort of.)

Lincoln called John Brown a “misguided fanatic.” Thoreau wrote a defence of him in which he remarked, “The only government that I recognise — and it matters not how few are at the head of it, or how small its army — is that power that establishes justice in the land.” Some 13 years before Brown’s bloody raid on Harper’s Ferry, Thoreau went to jail, in a quiet, half-comic way, to protest slavery and the U.S.’s territorial war on Mexico.

I’m writing this the evening before the global day of climate action, on the 10th anniversary of the Seattle WTO uprisings. I was in Seattle when the mainstream considered us nuts to think corporate globalisation was a bad idea; that perspective is mainstream now; and I can see the world waking up and shifting its sense of what we need to do about climate change. A quick online search reveals quite a lot of people have been called “climate-change fanatics,” mostly for believing the change is real and it requires some fairly profound responses. But the baseline of belief is shifting, thanks to the dedicated and unreasonable among us.

Fanatic is a troublesome word. I’ve written a book about disasters in which I propose throwing out the words panic and looting, because they’re incendiary terms more often used to misrepresent and justify authoritarian response than to describe reality on the ground. Maybe fanaticism is another such term, since my hero is your fanatic, and yesterday’s fanatic is so often tomorrow’s saint. Maybe we should all be a little more — not fanatical, but unreasonable and intransigent in our commitment to truth, to justice, to a better world.

[Rebecca Solnit’s book about disaster and civil society, A Paradise Built in Hell, will be out in time for Katrina’s fourth anniversary. She is a contributing editor to Harper’s Magazine and a Tomdispatch.com regular.]