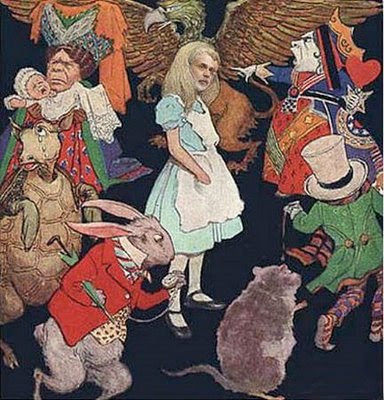 “The rule is jam tomorrow and jam yesterday – but never jam today!” Young Alice Bernanke stared at the ranting Queen and mumbled, “I don’t understand you. It’s dreadfully confusing!”

Monday’s top news headline could have been read through Lewis Carroll’s Looking Glass: “It’s Official: U.S. is in Recession” What a surprise. But even as the National Bureau of Economic Research read its formal pronouncement that, “A US recession began in 2007” the evil royalty and aides in Wonderland’s White house still refused to say the word “recession.”

Instead of fessing up and accepting what has been abundantly clear to most all of us as the economic sky is falling all around, White House spokesman “Foxy Loxy,” Tony Fratto, instead, breezily remarked upon the fact that the NBER “determines the start and end dates of business cycles.”

Too late for doublespeak. Bush’s last parade had all ready been undone. Hans Christen Anderson wrote about such parades in 1837. And the ending of his tale about another deluded emperor fits the Bush political legacy perfectly:

“The Emperor is naked,” the child said.

“Fool!” his father reprimanded, running after him. “Don’t talk nonsense!” He grabbed his child and took him away. But the boy’s remark, which had been heard by the bystanders, was repeated over and over again until everyone cried:

“The boy is right! The Emperor is naked! It’s true!”

The Emperor realized that the people were right but could not admit to that. He thought it better to continue the procession under the illusion that anyone who couldn’t see his clothes was either stupid or incompetent. And he stood stiffly on his carriage, while behind him a page held his imaginary mantle.”

But hundreds of thousands of Chicken Littles were all ready out of their coop of delusion having heard Bush and company formally described by everyone as being buck naked! A flapping, frantic flock followed including Goosey Loosey, Henny Penny and a Thanksgiving survivor, Turkey Lurkey, all squawking, panic selling and sending the Dow down 680 points, almost 8%.

Lewis Carroll had yet another explanation for things, that also might fit the end of the delusional politics of the Bush era while also acknowledging that no one has a clue about what is happening economically right now:

`It’s a poor sort of memory that only works backwards,’ the Queen remarked.

`What sort of things do you remember best?’ Alice ventured to ask.

`Oh, things that happened the week after next,’ the Queen replied in a careless tone. `For instance, now,’ she went on,`there’s the King’s Messenger. He’s in prison now, being punished: and the trial doesn’t even begin till next Wednesday: and of course the crime comes last of all.’

`That would be all the better, wouldn’t it?’ the Queen said.

With apologies to Mssrs. Carroll and Anderson.