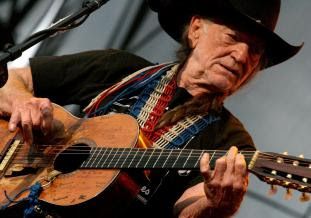 Part of Willie Nelson’s appeal has been the lack of certainty about his life, including the exact date of his birth. Some sources say it is April 28, some say it’s April 30. Photo by Bill Olive / Houston Chronicle
Friends and fans recall memories of the singer on his birthday
By Andrew Dansby / April 28, 2008 (or is it April 30?)

There was an uncomfortable silence when the subject of Willie Nelson came up. The conversation was about the song Luckenbach, Texas. Waylon Jennings talked about Nelson’s proposal that the two of them purchase the town. Jennings said he wouldn’t if Nelson had anything to do with the bank or the town’s finances. He called his old friend and Luckenbach duet partner a “crook.”

“No, I’m not kidding,” Jennings said.

Jennings made a few complimentary concessions to Nelson’s unique spirit. But he seemed deadly serious. He said he’d had his fill of business dealings with Nelson.

Seven years later, I brought up that conversation to another Nelson friend, Ray Price, who seemed convinced it was a joke.

“Waylon was pulling your leg,” he said. “Willie’s no crook. (Pause.) He’s just surrounded by them.”

He turns 75 today (some sources list his birthday as April 30, but most suggest he was born before midnight on the 29th), which seems remarkable given some of the myth and facts about his life. I could putter on about his discography, which I’ve owned in every format, from 45s and LPs to 8-tracks and cassettes to CDs and downloads.

Nelson’s work has been equally varied. There are the agreed-upon classics — Country Willie, Shotgun Willie, Yesterday’s Wine, Phases and Stages, Red Headed Stranger, Stardust, etc. — and others such as Tougher Than Leather and Spirit that reveal their beauty and craft later.

Even uneven albums have gems: Write Your Own Songs on WWII; Reasons to Quit, which gets hidden in Pancho and Lefty’s shadow; She’s Not for You, which is buried on Across the Borderline. The way his voice nearly breaks on the bridge of Always on My Mind remains sublime.

I’m not about to unravel Nelson’s mystique for anybody. It can be partly attributed to the seemingly leisurely phrasing, the reedy voice, the simplicity of the original songs and the comfortable rejiggering of the covers, the underrated guitar playing, the worn-out guitar itself, the loyalty to his band, the pigtails, the laid-back manner, the pugnacious streak that flickered up on creative matters.

Contradictory forces are no small part of his enduring allure, and more than the hillbilly/ hippie thing that prompts musician Jesse Dayton to call him “my spiritual hillbilly guru.”

Whether Nelson is a crook or a guy surrounded by crooks wouldn’t matter much if the songs weren’t great. The One Hell of a Ride box set, released earlier this month, is a great sampler, ranging from the mid-’50s to the present. It’s bookended by When I’ve Sang My Last Hillbilly Song, a version from 1954 and another from 2007. Ninety-eight songs come in-between, but most everybody finds some personal favorites in Nelson’s catalog.

Here, a few musicians, friends and/or fans offer some of their favorite Willie Nelson songs, both covers and originals.

Ray Price
“Willie always had his own way of singing, and I don’t see anything wrong with it. In that style, Still Not Over You is a favorite. He don’t sing it much, but I do.”

Billy Joe Shaver
“I’d have to say Crazy, it’s probably the best song ever written. I also like Healing Hands of Time. That helped me out when I was getting out of a relationship. His songs are healing songs. All of ’em. They’ll heal you if you listen.”

Ray Benson of Asleep at the Wheel
“My favorite is one Willie and I recorded called Write Your Own Songs. We were on the golf course one day, and he said, `Hey I just wrote a song, wanna hear it?’ At the time I was without a record deal; Willie was financing my album. There’s a line in it about how lousy the music business is. We never got that record deal.”

Johnny Bush
“What do you want from me? To tell you what an old fart he is? I lean toward Opportunity to Cry and Funny How Time Slips Away. He don’t write bad songs. In my opinion, he’s the greatest songwriter of the 20th and 21st centuries.”

Carolyn Wonderland
“Blue Eyes Crying in the Rain was my grandma’s song, so I heard it a whole lot. As you get older the words hit home a little differently. It’s so sad and beautiful the way he sings it. There’s that great twinge of hope that only he can do, even in that dark, dark corner.”

Jesse Dayton
“The thing I like about Me and Paul is it’s so conversational, you feel like Willie’s letting you in on it. I should also say that Home in San Antone backed by the Texas Troubadours is the swing-ingest stuff to ever come out of Texas. It’s a whole different kind of hillbilly jazz.”

Gene Watson
“I’ve always been a great admirer of Willie’s versatile songwriting ability. Just like he can bend a phrase when he sings, he phrases his songs in a unique way. Darkness on the Face of the Earth has always been one of my favorite Willie Nelson songs.”

Shelby Lynne
“Whiskey River, and the reason is I love the line `feeling the amber currents flowing from my mind.”’

Vince Bell
“Over the years, Willie has covered the writers from the Lone Star State righter’n hell. It’s hard to have favorites, but one of my all time favorites will remain his duet of the Townes Van Zandt song Pancho and Lefty with Merle Haggard.”

Leslie Sloan of Miss Leslie and Her Juke Jointers
“My heart has always rested with Willie’s early songs – written in the ’50s and ’60s. I love the hooks he wrote: `But there’s more old drunks than there are old doctors so I guess I’d better have another round’ from I Gotta Get Drunk. A perfect dancehall song.”

Billy Gibbons of ZZ Top
Angel Flying too Close to the Ground . . . it’s the incongruous coupling of country and western sounds with the surreal structural content.”