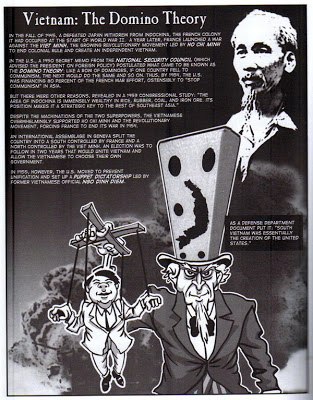 The “Domino Theory” was a prevailing historical paradigm at the time of the Vietnam War. Image from A People’s History of American Empire, by Howard Zinn, Paul Buhle and Mike Konopacki.

In 1962 Thomas Kuhn published a book, The Structure of Scientific Revolutions, suggesting that the development of scientific research was grounded in social structures. A set of scientific ideas, what he called a “paradigm,” become established in disciplines — chemistry, physics, biology — and this set of ideas, if they explain significant features of the field, become dominant. Most chemists, physicists, or biologists do scientific research from the standpoint of the fundamental ideas of the paradigm.

Kuhn said that newer generations of researchers and educators then work from within the paradigm. They do what he labeled “normal science.” Their publications, their theories, maintenance of their jobs, depend on them doing science from within the framework of the paradigm.

Kuhn then suggested that occasionally the dominant paradigm raises so many questions that it gets challenged. There is a “revolution” in the science and a new paradigm begins to dominate the discipline.

To me this view of science was fascinating. Studying any discipline, Kuhn seemed to be saying, involved the institutionalization of a way of thinking about a subject, making sure that way of thinking becomes part of the “power structure” of the discipline and only gets changed by “revolutions” in the field. The development of ideas, he implied, parallels domination and subordination in societies and stability challenged by radical change.

Some scholar/activists in the 1960s and beyond began to look at other fields, such as the social sciences and humanities, through the lens of Kuhn, whether or not it was his intention. These scholar/activists began to see that in virtually every field of study dominant paradigms were created that enshrined certain ideas including economics, history, politics, and culture.

For the most part, these paradigms celebrated capitalism, the United States in the world, American democratic institutions, and artistic works that ignored social problems and concentrated on the personal. However, increasing numbers of a new generation began to argue that key ideas were left out of these paradigms. Prominent among these suggestions was that understanding the United States and the world required considering the roles of class, race, and gender.

As a result of the turmoil on and off campuses in the 1960s, these scholar/activists were emboldened to critically revisit the dominant paradigms in their fields. They began to do research that looked at the underside of capitalism; the U.S. role in the world from an anti-imperialist lens; the connection between class, race, and U.S. political institutions; and the one-sidedness of excluding certain writers and artists for their political subjects from the study of literature and the visual arts.

Perhaps no paradigm was more enduring and institutionally self-serving than the consensus view of United States history. Students from K-12, college, and graduate school were educated to believe that American history was driven by the quest for assimilation, democratization, economic growth, and global leadership. That historic evolution was shaped by wise elites who were white, male, and wealthy; educated at the finest institutions of higher learning; and inspired by various humane religious faiths. It was a history of the rise to the top of expertise, compassion, wisdom, and the perfectibility of a people.

In Kuhn’s terms, young scholar/activists began to reflect more on the “anomalies” in the paradigm. Millions of indigenous people who had established vibrant and stable societies were massacred as Europeans and their descendants moved across the North American continent. The development of modern capitalism was based on hundreds of years of the accumulation of wealth produced by peoples kidnapped from Africa.

After slavery, racism continued to influence political and economic life throughout the United States. And, despite traditional claims, reforms in the work process, guarantees of health and welfare, and political rights resulted not from the benevolence of elites but through class struggle.

As anomalies in all the social sciences and humanities were uncovered, activists, students, young scholars, and even some older scholars realized that all knowledge reflects economic and political interests. There is no such thing as “academic objectivity.”

They discovered that the dominant ideas that were disseminated in elementary and high schools, college, graduate programs, and media punditry, reflected the paradigms that served the interests of the United States, particularly in the context of a struggle against ideas, movements, and nations that represented different paradigms and interests.

Those coming to newer perspectives also realized that the development of knowledge required not a distancing of the “scholar” from the people but the embedding of the research in political activity. Many realized that “theory and practice” were intimately connected.

Why all this discussion? Well Howard Zinn, a creator and product of the intellectual turmoil of the 60s presented us with a new paradigm for examining U.S. history, indeed all history. His classic text, A People’s History of the United States, which has been read by millions, compellingly presented a view of history that highlighted the roles of indigenous people, workers, women, people of color, people of various ethnicities, and all others who were not situated at the apex of economic, political, or educational institutions.

He taught us that we needed to be engaged in the struggles that shaped people’s lives to learn what needs to be changed, how their conditions got to be what they were, and how scholar/activists might help to change the world.

Perhaps most important, Zinn demonstrated that participants in people’s struggles were part of a “people’s chain,” that is the long history of movements and campaigns throughout history that have sought to bring about change. As he wrote in his autobiography, You Can’t Be Neutral on a Moving Train: A Personal History of Our Times:

What we choose to emphasize in this complex history will determine our lives. If we see only the worst, it destroys our capacity to do something. If we remember those times and places — and there are so many — where people have behaved magnificently, this gives us the energy to act, and at least the possibility of sending this spinning top of a world in a different direction.

And if we do act, in however small a way, we don’t have to wait for some grand utopian future. The future is an infinite succession of presents, and to live now as we think human beings should live, in defiance of all that is bad around us, is itself a marvelous victory.