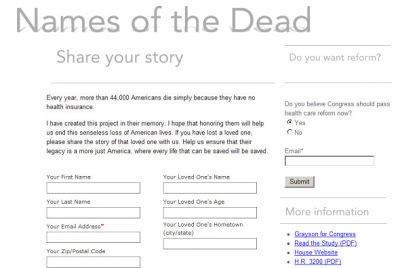 Go here to add names of those who have died from the lack of health care.
We should read the names of the dead
From the steps of the Capitol

I noted in the morning newspaper that Rep. Alan Grayson has established an online roll of those that have died from lack of medical care.

A tremendous idea! At age 88 I wish I could do more; however, Health Care For America Now, the unions promoting single payer, Physicians for a National Health Program, and other groups should take spread the word about this excellent web tool.

We should begin community canvassing to obtain names and information for the website. Let us try and post several thousand at least out of the 45,000 dead reported in The Harvard study.

I doubt that the United States mainstream media will pay much attention; hence, this outstanding contribution that shows the compassion still felt in some parts of our community, should be called to the attention of the foreign press, such as the various Canadian newspapers, The Independent and Guardian in the UK, Le Monde in France, and Der Spiegel in Germany. I am sure that the online publications are already taking note.

Then we could do readings from the Capitol steps of the names of health care casualties. Perhaps, just perhaps, shame will offset the payoffs to certain Senators and bring the White House out of its lethargy and force the president to take an unequivocal stand for an open and immediate public option. Time grows short!

Our accolades to Representative Grayson. The nation has been in need of such a dedicated and fearless leader.