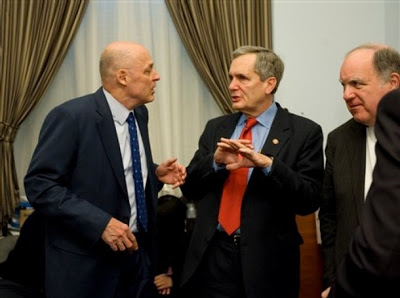 See Video with Lloyd Doggett and Ben Bernanke and ‘Trust but Verify’ by James K. Galbraith and William K. Black, Below.

I am writing to let you know of my objections to the sudden demand of President Bush that Congress immediately approve near unlimited authority for his Administration to bail out Wall Street. Certainly, all of us want to avoid further deterioration of our economy, but I am appalled by the manner and nature of his request. I have been raising my concerns in meetings with colleagues and through speeches on the floor of the House of Representatives.

In addition, I had the opportunity to question Federal Reserve Chairman Ben Bernanke on the Administration’s proposed bailout plan yesterday. I highlighted the fact that the President has not explained how he would pay for his Wall Street bailout and has relied instead on his mantra of “borrow more money.” You can view my questioning of Chairman Bernanke here.

As I continue to question the rush to approve this complex plan, I am seeking to include as many safeguards for taxpayers as possible. While the formal floor debate over this proposal has not yet gotten underway, I also delivered the brief remarks [below] this week… An excellent enumeration of some of these safeguards from Dr. James Galbraith of the LBJ School of Public Affairs follows as well…

In somber tones last night, President Bush described a crisis as if it had emerged on Wall Street from outer space. Never accepting any personal responsibility, this is the man, who chased the sheriff off Wall Street, while they had a party – a Grand Old Party.

That infamous Republican earmark – the Bridge to Nowhere up in Alaska – it carried a hefty price tag: $223 million. Well, what President Bush is now asking Americans to do is pay for the equivalent of 4500 Alaskan bridges – a trillion dollar, gold-plated, diamond-encrusted “Bridge to Wall Street.”

Our job here in Congress is to ask “Is this just another bridge to nowhere?” And to ask why is it that the partygoers don’t have to pay for the party? Why should American taxpayers and future generations of Americans have their future mortgaged to pay for a party they never participated in?

“Wall Street got drunk. Mr. President, you gave them the keys to the liquor cabinet.”

A few months ago, President Bush accurately diagnosed the problem he just dumped in the lap of Congress. “Wall Street got drunk, and now it’s got a hangover,” he said. But Mr. President, you gave them the keys to the liquor cabinet by failing to enforce our laws. And now you’re really demanding that Americans, who didn’t get invited to the party, must pay for everything destroyed in the drunken brawl.

These late night negotiators have not asked the President, “Where do we find $700 billion?” It is time to demand that bailout supporters outline the revenue measures necessary to pay for it. And the place to begin is with those who enriched themselves when Republicans took the cops off the corporate beat. We need an alternative to just raising the credit card limit-an alternative to more irresponsible “borrow and spend” from a President who has already borrowed more from foreigners than all previous Presidents in American history put together and who continues to mortgage America’s future.

“These are the days of miracles and wonders…” The market has collapsed, only the government can save us now. Thirty years of cant have evaporated. Suddenly, we’re all in it together, Henry Paulson and Ben Bernanke in the lead, Congress pulling like post-partisan galley slaves, George Bush lying low and looking, no doubt fervently, for the exits.

Something must be done. Yes. But on what terms? Treasury proposes to spend $700 billion on purchase mortgage-backed securities, accountable to no-one. Secretary Paulson asks for trust. To a degree, he has earned it. But remember: this man started out in office to gut Sarbanes-Oxley, he tried to cripple the SEC, and only two weeks ago he relied on Morgan Stanley – not a disinterested party – for advice that led to the nationalization of Fannie Mae and Freddie Mac. Therefore: “Trust but verify,” as Ronald Reagan would (and did) say.

Congress must now impose conditions to protect the public, the national interest and, not least, the interests of the next administration. Herewith a short list:

1) A disclosure clause. Treasury should have immediate and complete access to information about portfolios, counterparties, the internal valuation methods used by financial firms, their proprietary models, and the history of adjustments made to those models to recognize or conceal losses as the crisis unfolded.

2) A pricing clause. Treasury should establish a transparent mechanism to establish an ex ante fair market value for mortgage-backed securities, set limits on the premium paid over that value in reverse auctions, and require that financial institutions mark-to-market at the sale price. In other words, accounting forbearance should be prohibited.

3) A fraud clause. Securities purchased should be reviewed and those found to be based on fraudulent appraisals, inadequate documentation, predatory and other abusive practice should be kicked back to the lenders at a penalty rate.

4) An enforcement clause. Treasury should be required to establish a framework for investigations and criminal referrals and to prove that the framework is in aggressive use. Participating firms should be required to investigate and document past frauds, to establish internal anti-fraud controls, and make criminal referrals as necessary. The FBI and Assistant US Attorneys should get a ‘blank check’ authorization to pursue the crimes behind this debacle.

5) An arbitrage clause. One big danger of Paulson’s plan is that non-US institutions, hedge funds and others will seize the chance to sell their bad holdings to eligible U.S. institutions, replenishing the swamp just as the Treasury seeks to drain it. All U.S. financial institutions should be required to provide baseline information on their MBS and other eligible holdings as of September 15, 2008.

6) A transparency clause. Treasury operations under this plan, including communications and consultation with outside advisers, should be transparent to Congress, which should get whatever information it wants, at regular intervals. No exceptions.

7) A crony clause. This program must be run by people who are free of abusive conflicts of interest. To ensure this, the Treasury should require full financial disclosure for anyone hired to administer the program, and impose rules and a system to enforce a strict conflict code. Special note to Congress: John McCain personifies and embodies the crony system. Do not pass a bill that would give him, as president, unfettered control over how this program is run.

8) A modification and disposal clause. As foreclosures mount, Treasury will end up in control of physical properties, which degrade rapidly if not sold or rented and occupied. To prevent this, a new agency should be established to rapidly modify existing mortgage contracts, to manage rental conversions and to lease, sell or demolish vacated homes. This agency can be run as draft boards were in wartime, by citizens in each community under federal guidelines.

Is this all? No, it’s only a start. Other measures must follow, including comprehensive regulatory reform, mortgage relief, revenue sharing to protect state and local public spending as property tax revenues tank, support for public capital investment and job creation. These are however the agenda for the next administration.

Getting to that next administration is the job now for the American people.

[James K. Galbraith is author of The Predator State: How Conservatives Abandoned the Free Market and Why Liberals Should Too. He teaches at The University of Texas at Austin. William K. Black is author of The Best Way to Rob a Bank is to Own One. He teaches at the University of Missouri, Kansas City. A former regulator, he was the man who blew the whistle on the Keating Five.]