La Vida Coca /3:
Currents in traditional coca
use in Bolivia and Peru

Regular tours of the area include coca ‘plantations.’ Almost all of the other travelers we met in Coroico and Copacabana were interested in trying and discussing coca.

(Rag Blog Contributing Editor Wizard recently visited Peru and Bolivia with former fellow Ragstaffer Richard Lee. Wizard says the whole thing was Lee’s idea, although she did the heavy lifting of writing this report of their experiences, while lifting copiously from conversations they shared and short reports Richard wrote on the spot.)

After being in Coroico about a week, we asked a woman we’d met on our first day there if she knew any cocaleros who might be willing to talk with us about the crop. A hard-working, intelligent person who was extremely patient with our often halting Spanish, she laughed, ducked her head, and said, “Soy una cocalera.” (“I am a coca grower.”)[1]

She isn’t a commercial grower. She and her family tend a few plants, along with abundant fruit trees and vegetables. Over coffee and cake, she described carefully sprouting the small red seeds, transplanting them into pots, then into the field. She showed us the growth pattern of the plants and told us that the growth tips are never touched. We heard about cutting plants off near the base, then regrowing them; regeneration can occur several times, giving plants a life span of 20 years or more.

Most of what we learned I’ve since confirmed online, but there’s nothing like hearing it from a passionate gardener! Her cupped hands as she demonstrated transplanting seedlings, her expertise in how to tell by touch when the hojas are dry enough for storage, reminded me of every other master gardener I know: pride, respect, and love make things grow. Richard, green thumb tingling, was also in his element!

Still, we wanted to see large coca fields. A couple we’d met recommended a local taxista who knew the area well, and we took an agricultural tour of greater Coroico. Tramping up and down steep, muddy jungle slopes before breakfast, swarmed by aroused mosquitoes, we weren’t so much in our element as over cake and coffee! But we kept on chewing hojas and drinking water, and keeping on, until we saw what we came to see: well-tended, mature cocal, up close and personal.

Specific comments regarding manzanillo as a sleep aid, yerba buena to “balance” heavy foods, and yerba luisa as an overall tonic were noted. As in other indigenous cultures, many foods’ and condiments’ health effects are common knowledge, especially in traditional Quechua- and Áymara-speaking households.

After I had an allergic reaction to Coroico’s notorious mosquitoes, bringing up lovely big red welts on my arms, everyone we met told me about one or another traditional repellent. Rubbing whole limes (Citrus limonum) on the skin in the evening was the one most mentioned. To be fair, DEET also worked quite well; if only I’d thought to use it that first rainy day!

Both countries boast a wealth of fruits and vegetables — Bolivia has over 30 varieties of potatoes (papas; Solanum spp.)! — many not seen in the U.S., or seen infrequently, or in a processed state. While restaurants do not avail themselves much of this produce bounty (many serve French fries and rice at every meal!), a trip to the mercado brings delicious rewards. We recruited friends to cook papas lisas for us and enjoyed a fabulous traditional stew of the tiny potatoes, onion (Allium cepa), and alpaca rib meat – ¡que sabrosa!

Besides cattle, pigs, poultry, and sheep, two domestic camelid species, llamas and alpacas, are raised for meat, fiber, and as beasts of burden. (Wild vicuñas are protected.) Alpaca meat isn’t much different from grass-fed beef in flavor. Guinea pigs (cuy) are also a traditional Andean food. Richard ate cuy years ago in Ecuador; I’ll pass! However, some dishes I did have were equally odd, like this “chicken foot soup”: 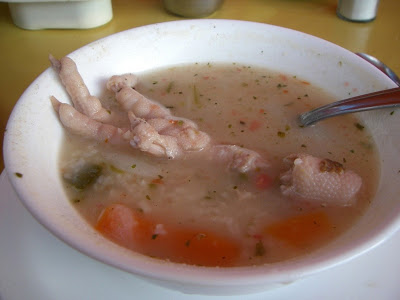 Peru, with its extensive coastline — Bolivia is landlocked — offers a wide array of fresh seafood. Lake Titicaca, between the two nations, is home to delicious lake trout.

By the way, again from Wikipedia, “Raw coca leaves, chewed or consumed as tea or mate de coca, are rich in nutrition… Specifically, the coca plant contains essential minerals (calcium, potassium, phosphorus), vitamins (B1, B2, C, and E) [, and]… protein and fiber.”[2]

Not all traditional medicine in the region is herbal or food-based. Good luck rituals and tokens abound, like the brightly-colored fetishes below, in La Paz’ Mercado de Hechicería (Witches’ Market). Arriving during Carnavál, we also saw cars, taxis, and buses decorated and prayed over as a blessing; and good luck icons by the score, such as miniatures of items the buyer hopes to obtain: money, cars, televisions, etc.[3] All of the shops in the Hechicería had coca. Some Andean shamans use hojas to divine the future.

While our inquiries had been fruitful, we had questions our local informants couldn’t readily answer. For example, other than for rapid drainage, and where the terrain consists of steep slopes, is it necessary to plant at such challenging angles? Also, can cocal be grown at lower altitudes than Coroico’s 5000 feet above sea level, and if so, would this affect its strength or efficacy?

Lest you think we must have stood out for our unusual interest in coca, rest assured, we did not. Regular tours of the area include coca “plantations.” Almost all of the other travelers we met in Coroico and Copacabana — people of all ages from Switzerland, Belgium, New Zealand, Chile, Brazil, Germany, France, Australia, and Japan — were interested in trying and discussing coca. Bolivians from other parts of the country were interested in comparing the local product with coca from their area.

Our “where’s Waldo?” moment: a day after our field trip, strolling across Coroico’s plaza for perhaps the 50th time that week, we finally recognized the healthy if somewhat untended stand of cocal growing there among the palms and hibiscus (Hibiscus sabdariffa). Since this is about the only flat spot in Nor Yungas, it seemed to settle whether cocal must be grown on a slope! (The question of altitude remains open.)

It is in the plaza that matters of interest are discussed before and after cocalero meetings at the roofed “polyfunctional” sports court down the hill. Bolivia’s future is being shaped by astute agriculturalists who value tradition but want the benefits of modernity. Change, like the new cell phone technology that has reportedly made rural life safer, is weighed and measured before adoption.

In this small plaza and others all over Bolivia and Peru, citizens talk and relax at the end of the day or the week, after school or at lunch time. Taxis come and go; buses disgorge weary travelers. Children and dogs run free and everyone sees that the soccer ball doesn’t bowl over any old folks. Young couples promenade hand in hand in the evening, while the ice cream man, and the chicken sandwich lady, and the elders sitting on stone or wooden benches smile in approval. Here, coca is at home.

[Rag Blog Contributing Editor Mariann G. Wizard, a Sixties radical activist and contributor to The Rag, Austin’s underground newspaper from the 60s and 70s, is a poet, a professional science writer specializing in natural health therapies, and a regular contributor to The Rag Blog. Read more poetry and articles by Mariann G. Wizard on The Rag Blog.]

Footnotes:
[1]I’m not naming any Bolivian acquaintances, in order to protect their privacy. None of them live electronically.
[2]http://en.wikipedia.org/wiki/Coca
[3]The fake lucky dinero, by the way, is from “El Banco de Buena Fortuna,” and Richard got taken for 50 Bolivianos (about $7.50 US) by making change in the dark. It’s a wonder what a photocopier can do, isn’t it?