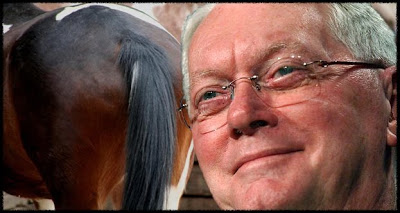 Graphic by Larry Ray / The Rag Blog (with apologies to the horse).
Sen. Jim Bunning: A Shameful Show

While many senators were terse and faulted Geithner for not having a detailed bailout plan in hand, Senator Bunning was coarse, mean spirited and imperious.

Secretary Geithner was questioned by members of the Senate Budget Committee with Republican Senators particularly putting on quite a show, peppering Geithner with rhetorical verbal lashings that served not so much to educe useful answers as to vent frustrations and to grandstand for the voters back home.

Televised hearings, instead of being orderly proceedings seeking to find solid solutions, are unfortunately being used as free political advertising by disorderly and disgraceful public officials like Senator Jim Bunning.

Secretary Geithner has barely had time to move into his office. Yet he has spent more time appearing before hearings than he has using his expertise and experience to craft details of his bailout budget plan. Today’s petty viciousness did not serve America in any way. Instead of budget committee members asking rational questions and attempting to help craft a plan with positive ideas and input, the hearing was more like something from the Spanish Inquisition.

Secretary Geithner showed his mettle and maturity as he weathered the rude rantings and abrupt cavalier treatment, the worst of which came from aging Republican Senator Jim Bunning. In case the name doesn’t roll off your tongue immediately, Bunning is the snappish buffoon who has a history of ugly, mindless and mean spirited comments for which he has repeatedly been forced to apologize. He made Time magazine’s list of the worst senators, and refused to return to Kentucky to debate his opponent, instead doing it from Washington, where it was later learned he had used a teleprompter for the debate.

His most recent gaffe was made at a Hardin County (Ky.) Republican Party’s Lincoln Day Dinner. In a headline grabbing comment about approaching vacancies on the Supreme Court he predicted that U.S. Supreme Court Justice Ruth Bader Ginsburg would be dead by year’s end.

While many senators were terse and faulted Geithner for not having a detailed bailout plan in hand, Senator Bunning was coarse, mean spirited and imperious. After asking Geithner, “Where is your plan to rescue the United States system? We’ve been waiting for that.” he would not allow Geithner to even respond, shouting over him with more ranting questions.

Bunning’s tirade was what one might expect to see from an an enraged worker who has lost his job, all his savings and his home having a rude rant at George Bush. Yet here is a disgraced Republican Senator whipping up on a member of President Obama’s cabinet.

Fearful of losing his seat as junior senator from Kentucky, Bunning just a few weeks ago threatened to sue the National Republican Senatorial Committee if it tries to recruit a GOP candidate to challenge him. He went on wildly, claiming Kentucky Senate President David Williams “owes him $30,000” and questioned the honesty of NRSC Chairman John Cornyn of Texas.

To his credit, Secty. Geithner kept his cool, and strongly defended his budget plan and even after being rudely interrupted by Bunning who waived a memo and hissed, “Where is the bottom line to the taxpayer dollar-wise?” Geithner defended the $160 billion AIG bailout, offering measured, rational reasoning.

Sadly, his fellow senators allowed Bunning to berate and verbally lash the Treasury Secretary like he was an unprepared schoolboy. Finally, following the firestorm, Senator Lindsey Graham, R-S.C. attempted a half-hearted try at extending an olive branch, saying to Geithner, “Thank you for taking the job, I know it is tough.” It was too little too late. But Geithner remained poised, restrained and certainly much more professional than the gathered Senators.

Bunning is clearly old, cranky and may be exhibiting early senile dementia. He also may still be living in some reverie from his days as a major league baseball pitcher dating back to the 1950’s. But even back then the only good thing many baseball fans remember Jim Bunning ever did was blowing the 1964 pennant for the Phillies, so the Cardinals could come from 6 games back and win. But finding a way to halt America’s worsening economy is no game, and Senator Bunning’s time at bat today showed him swinging wildly and striking out.

Like the old horses from his state of Kentucky, he needs to be put out to pasture. It is no secret that many of his colleagues would like that.