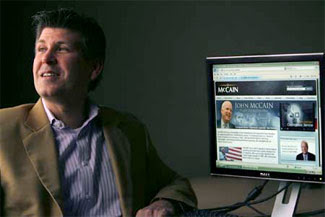 COLUMBUS — A high-level Republican consultant has been subpoenaed in a case regarding alleged tampering with the 2004 election.

Michael L. Connell was served with a subpoena in Ohio on Sept. 22 in a case alleging that vote-tampering during the 2004 presidential election resulted in civil rights violations. Connell, president of GovTech Solutions and New Media Communications, is a website designer and IT professional who created a website for Ohio’s secretary of state that presented the results of the 2004 election in real time as they were tabulated.

At the time, Ohio’s Secretary of State, Kenneth J. Blackwell, was also chairman of Bush-Cheney 2004 reelection effort in Ohio.

Connell is refusing to testify or to produce documents relating to the system used in the 2004 and 2006 elections, lawyers say. His motion to quash the subpoena asserts that the request for documents is burdensome because the information sought should be “readily ascertainable through public records request” – but also, paradoxically, because “it seeks confidential, trade secrets, and/or proprietary information” that “have independent economic value” and “are not known to the public, or even to non-designated personnel within or working for Mr. Connell’s business.”

According to sources close to the office of Clifford Arnebeck, one of the Ohio attorneys who brought the case, Arnebeck intends to ask the court to compel Connell to testify. An emergency conference with the judge, originally scheduled for Monday, is to be rescheduled.

The case, known as King Lincoln Bronzeville Neighborhood Association v. Blackwell, was filed against Kenneth J. Blackwell on Aug. 31, 2006 by Columbus attorneys Clifford Arnebeck, Robert Fitrakis and others. It initially charged Blackwell with racially discriminatory practices — including the selective purging of voters from the election rolls and the unequal allocation of voting machines to various districts — and asked for measures to be taken to prevent similar problems during the November 2006 election.

On Oct. 9, 2006, an amended complaint added charges of various forms of ballot-rigging as also having the effect of “depriving the Plaintiffs of their voting rights, including the right to have their votes successfully cast without intimidation, dilution, cancellation or reversal by voting machine or ballot tampering.” A motion to dismiss the case as moot was filed following the November 2006 election, but it was instead stayed to allow for settlement discussions.

The case took on fresh momentum earlier this year when Arnebeck announced in July that he was filing to “lift the stay in the case [and] proceed with targeted discovery in order to help protect the integrity of the 2008 election.” The new filing was inspired in part by the coming forward as a whistleblower of GOP IT security expert Stephen Spoonamore, who said he was prepared to testify to the plausibility of electronic vote-rigging having been carried out in 2004.

Arnebeck’s hope was that in the course of the discovery procedure it would be possible to subpoena Michael Connell, former White House Deputy Chief of Staff Karl Rove, and others to obtain additional information and improve the focus of the case. The stay was lifted Sept. 19, 2008 by an order from Magistrate Judge Terrence P. Kemp of the United States District Court for the Southern District of Ohio, and a subpoena was served to Connell on the following Monday, Sept. 22.

The interest in Mike Connell stems from his association with a firm called GovTech, which he had spun off from his own New Media Communications under his wife Heather Connell’s name. GovTech was hired by Ohio Secretary of State Kenneth Blackwell to set up an official election website at election.sos.state.oh.us to presented the 2004 presidential returns as they came in.

Connell is a long-time GOP operative, whose New Media Communications provided web services for the Bush-Cheney ’04 campaign, the US Chamber of Commerce, the Republican National Committee and many Republican candidates. This in itself might have raised questions about his involvement in creating Ohio’s official state election website.

However, the alternative media group ePlubibus Media further discovered in November 2006 that election.sos.state.oh.us was hosted on the servers of a company in Chattanooga, TN called SmarTech, which also provided hosting for a long list of Republican Internet domains.

Given that the Bush White House used SmarTech servers to send and receive email, the use of one of those servers in tabulating Ohio’s election returns has raised eyebrows. Ohio gave Bush the decisive margin in the Electoral College to secure his reelection in 2004.

IT expert Stephen Spoonamore says the SmartTech server could have functioned as a routing point for malicious activity and remains a weakness in electronic voting tabulation.

According to Spoonamore’s Sept. 17 affidavit, the “computer placement, in the middle of the network, is a defined type of attack.” Spoonamore describes this as a “Man in the Middle Attack” or MIM.

“It is a common problem in the banking settlement space,” he writes. “A criminal gang will introduce a computer into the outgoing electronic systems of a major retail mall, or smaller branch office of a bank. They will capture the legitimate transactions and then add fraudulent charges to the system for their benefit.”

“Any time all information is directed to a single computer for consolidation, it is possible, and in fact likely, that single computer will exploit the information for some purpose,” he adds. “In the case of Ohio 2004, the only purpose I can conceive for sending all county vote tabulations to a GOP managed Man-in-the-Middle site in Chattanooga before sending the results onward to the Sec. of State, would be to hack the vote at the MIM.”

Hold letters were sent out in July to parties in the case, informing them of their obligation not to destroy relevant documentation. One such letter went to Attorney General Michael Mukasey, asking him to advise the federal government of its responsibility to preserve emails from Rove.

Arnebeck explained, “We expressed concern about the reports that Mr. Rove destroyed his emails and suggested that we want the duplicates that should exist [be put] under the control of the Secret Service and be sure that those are retained, as well as those on the receiving end in the Justice Department and elsewhere, that those documents are retained for purposes of this litigation, in which we anticipate Mr. Rove will be identified as having engaged in a corrupt, ongoing pattern of corrupt activities specifically affecting the situation here in Ohio.”

More recently, Newsweek’s Michael Isikoff has revealed that John McCain’s presidential campaign paid nearly a million dollars for web services to a firm called 3eDC, created and partly owned by McCain campaign manager Rick Davis. According to an archived version of a 3eDC webpage from 2007, that firm’s five “strategic partners” included not only Connell’s New Media Communications but also Campaign Solutions – a firm run by Connell’s sometimes-partner, Rebecca Donatelli – and a component of SmarTech called AirNet.

The Origin of the Case

The roots of the King Lincoln Bronzeville case go back to the case of Moss v. Bush, which Arnebeck, Fitrakis and other attorneys filed immediately after the 2004 presidential election. In that filing, they challenged the results of the Ohio voting on the basis of numerous irregularities and allegations of fraud and sought to depose President George W. Bush, Vice President, Dick Cheney, and then-White House Deputy Chief of Staff, Karl Rove, as well as Secretary Blackwell.

That case was dropped by the plaintiffs in January 2005, after the US Senate accepted the casting of Ohio’s electoral votes for George W. Bush. Two weeks later, Ohio’s Republican Attorney General James Petro attempted to sanction and fine the attorneys for what he described as a “frivolous filing,” but they were supported by Rep. John Conyers (D-MI) – then the ranking member of the House Judiciary Committee – who had already held a hearing at which Arnebeck and Jesse Jackson testified concerning the suppression of minority votes. Those same concerns are now at the heart of King Lincoln Bronzeville.