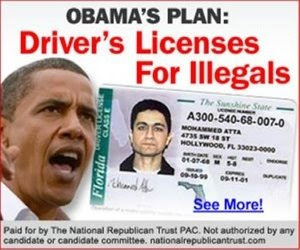 The Worst Campaign Ad of the Entire Season?
By Kyle Munzenrieder / October 20, 2008

Wonkette has this ad starring America’s (and by that I mean, the America Michelle Bachman and Sarah Palin talk about, the “pro-American America”) two most feared terrorists from the National Republican Trust PAC (as in, not directly related to McCain). Ha ha, yes it is hysterically, ridiculously, sad and desperate, and not at all based in any sort of fact. Actually, the version of Mohamed Atta’s drivers license they feature is a fake.

Also it said it was issued in September ’99, but Atta didn’t get his license until April ’01. And wait, who was in charge of Florida then? Jeb Bush and a Republican-controlled Legislature. Not that they’re at fault either, but if I had a PAC, I could make a pretty good smear ad out of it, that is if I decided I didn’t really need any semblance of dignity.

For the record, disgraced formed NY Gov. Elliot “Client 9” Spitzer had this whole “give driver licenses to illegal immigrants” plan, and in the primaries, Obama said he supported it. It was mainly an issue because Hillary changed her stance on it a couple of time. Now it’s linked, for absolutely no reason, to terrorism, because people are horrible, horrible racists or deeply partisan twats who aren’t above using the worst fear-based tactics to score a win for their guy.