Republicans – aka "The Sick Fuck Party" 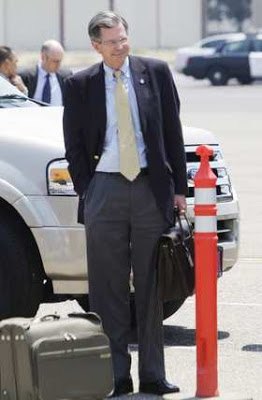 Charlie Black has had his moment of straight talk … and chances are he’s not going to let it happen again.

Longtime Republican strategist and operative Charlie Black reflected on how a terrorist attack would help the candidacy of presumptive Republican presidential nominee John McCain A recent Washington Post piece on Black aptly described him as “John McCain’s man in Washington,” a “longtime uber-lobbyist” and “political maestro” who hopes “to guide his friend, the senator from Arizona, to the presidency this November.”

Now comes a Fortune magazine article that, even more aptly, notes the “startling candor” with which Black discussed how a spotlight on national security would serve McCain’s political purposes.

First, he provided some background.

The assassination of Pakistani political leader Benazir Bhutto in late December was an “unfortunate event,” Black told Fortune, but it boosted McCain’s stock in the fast-approaching New Hampshire Republican primary that he absolutely, positively had to win. The candidate’s “knowledge and ability to talk about it reemphasized that this is the guy who’s ready to be commander in chief. And it helped us,” Black said.

Then, the longtime political pro got a bit too honest. Asked about the political impact of another terrorist attack on U.S. soil, Black replied: “Certainly it would be a big advantage to him.”

Black may be correct, but he’s not supposed to be quite so blunt in coldly calculating the upside for McCain of harm coming to Americans. Others — unconnected with the campaign — could offer such an assessment, but he should have dodged the question.

He knows it, and The Times’ Maeve Reston reports that outside a McCain fundraiser today in Fresno, Black said: “I deeply regret the comments — they were inappropriate. I recognize that John McCain has devoted his entire adult life to protecting his country and placing its security before every other consideration.”

McCain, for his part, did what he’s supposed to do — stressing his lifelong commitment to protecting America and flat out disputing Black’s premise. “It’s not true,” he said when asked in Fresno about his aide’s remark.

McCain, for his part, did what he’s supposed to do — stressing his lifelong commitment to protecting America and flat out disputing Black’s premise. “It’s not true,” he said when asked in Fresno about his aide’s remark.

Barack Obama’s campaign played its role, taking great umbrage to Black’s comment while using it to stress one of its talking points.

Spokesman Bill Burton said, “The fact that John McCain’s top advisor says that a terrorist attack on American soil would be a ‘big advantage’ for their political campaign is a complete disgrace, and is exactly the kind of politics that needs to change.”

But Burton also said Obama “welcomes a debate about terrorism with John McCain, who has fully supported the Bush policies that have taken our eye off of Al Qaeda, failed to bring Osama bin Laden to justice, and made us less safe.”

The Fortune article that sparked the flap (and in which Black is tangential) can be read here. Our colleague Jill Zuckman over at the Swamp has her take on the incident here.

This entry was posted in RagBlog and tagged Presidential Campaign, Republican Party. Bookmark the permalink.