Republicans and Racism : Could Go the Way of the Whigs 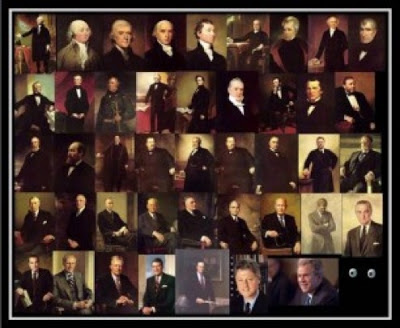 Republican emailing with pictures of all the presidents. Obama’s square is just a black space with two eyeballs.

It’s perfectly OK to be a racist in the Republican Party, as long as you keep it ‘in house’ and pass it off as a joke.

Before the mid-sixties,the dominant political party in the South (and in Texas) was the Democratic Party. In fact, at that time, most of those states had virtually a one-party system. I know that in Texas, the only real election was in the Democratic primary, because the November election was a foregone conclusion. Republicans didn’t have a chance.

But that changed in the mid-sixties, when President Lyndon Johnson and the Democrats stepped up, bit the bullet, and did the right thing by passing the civil rights laws. It was badly needed and long overdue, but it was also disastrous for the Democratic Party in the South. Sadly, there were still a lot of racists in Texas and the South at that time, and they fled en masse to the Republican Party.

With the addition of this huge volume of racists, the Republican Party in the South not only became competitive, but became the dominant party of the region. It is still that way, although due to changing attitudes the Democrats are now starting to become more competitive in Texas and many Southern states, as more and more whites shed their racism.

Republicans have pushed forward their tokens like Alan Keyes and Michael Steele, trying to give the impression they are a “big tent” party. Then they are amazed that these tokens aren’t able to attract African-Americans to their party. They haven’t figured out that the tokenism won’t work as long as their party harbors and accepts a rabidly racist element.

They not only harbor these racists, but in many instances they allow them to assume positions of power and influence in the party. A couple of fresh instances of this came to light just in the last week.

In South Carolina, a prominent GOP activist named Rusty DePass responded to a Facebook comment about a gorilla escaping a Columbia zoo by remarking, “I’m sure it’s just one of Michelle’s ancestors — probably harmless.”

When called to task on this incrediby racist remark, his only defense was “The comment was clearly in jest.” He thinks it’s OK to be racist, as long as its funny. Well, it’s not OK, and it shows just how accepting of racists and racism the Republican Party has become.

Meanwhile in Tennessee, Sherri Goforth, a legislative staffer for Republican State Senator Diane Black, e-mailed a little racist humor to some others in her party. It was a poster that had been knocking around the internet for a while among right wing racists. It shows pictures of all the presidents of the United States — all but President Obama. Obama’s square is just a black space with two eyeballs.

Was Ms. Goforth embarrassed by her obviously racist action? Not in the least. She was just upset because she accidently sent the e-mail to some who weren’t racists and she got exposed. She said, “I went on the wrong email and I inadvertently hit the wrong button. I’m very sick about it, and it’s one of those things I can’t change or take back.”

It’s perfectly OK to be a racist in the Republican Party, as long as you keep it “in house” and pass it off as a joke. These are not the only instances of Republican racism. There have been many others, like the poster showing the White House lawn turned into a watermelon patch. Is it any wonder that most African-Americans (and other minorities) don’t feel comfortable in the Republican Party — the party that accepts such behavior from its members?

With each succeeding generation, the United States becomes a little less racist. Added to the fact that many whites are shedding their racist tendencies, is the fact that in many parts of this country, the majority of the population is now composed of minorities. Both of these trends are going to continue, and that’s bad news for the Republican Party.

The Republican Party must face its internal racism and get rid of it. Failure to do so will ensure they become a party of little significance in the future, and could result in their demise. Dump the racism or go the way of the Whigs!

This entry was posted in Rag Bloggers and tagged Racism, Republican Party, Right Wing, the South. Bookmark the permalink.

2 Responses to Republicans and Racism : Could Go the Way of the Whigs