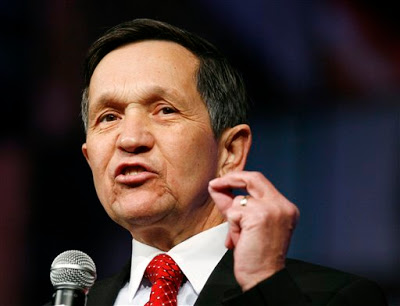 On June 9, 2008, Rep. Dennis Kucinich, (D.,Ohio) made a remarkable presentation before the Congress of the United States calling for the impeachment of George W. Bush. Below are Kucinich’s 35 articles of impeachment, followed by the full text of Article I. In the ensuing days, The Rag Blog will present further texts from Kucinich’s impeachment resolution.

These articles of impeachment were introduced in the U.S. House of Representatives by Congressman Dennis Kucinich on June 9, 2008, as H. Res. 1258

Resolved, that President George W. Bush be impeached for high crimes and misdemeanors, and that the following articles of impeachment be exhibited to the United States Senate:

Article I
Creating a Secret Propaganda Campaign to Manufacture a False Case for War Against Iraq.

Article II
Falsely, Systematically, and with Criminal Intent Conflating the Attacks of September 11, 2001, With Misrepresentation of Iraq as a Security Threat as Part of Fraudulent Justification for a War of Aggression.

Article III
Misleading the American People and Members of Congress to Believe Iraq Possessed Weapons of Mass Destruction, to Manufacture a False Case for War.

Article IV
Misleading the American People and Members of Congress to Believe Iraq Posed an Imminent Threat to the United States.

Article VI
Invading Iraq in Violation of the Requirements of HJRes114.

Article VIII
Invading Iraq, A Sovereign Nation, in Violation of the UN Charter.

Article X
Falsifying Accounts of US Troop Deaths and Injuries for Political Purposes.

Article XII
Initiating a War Against Iraq for Control of That Nation’s Natural Resources.

Article XIIII
Creating a Secret Task Force to Develop Energy and Military Policies With Respect to Iraq and Other Countries.

Article XIV
Misprision of a Felony, Misuse and Exposure of Classified Information And Obstruction of Justice in the Matter of Valerie Plame Wilson, Clandestine Agent of the Central Intelligence Agency.

Article XVI
Reckless Misspending and Waste of U.S. Tax Dollars in Connection With Iraq and US Contractors.

Article XVIII
Torture: Secretly Authorizing, and Encouraging the Use of Torture Against Captives in Afghanistan, Iraq, and Other Places, as a Matter of Official Policy.

Article XIX
Rendition: Kidnapping People and Taking Them Against Their Will to “Black Sites” Located in Other Nations, Including Nations Known to Practice Torture.

Article XXI
Misleading Congress and the American People About Threats from Iran, and Supporting Terrorist Organizations Within Iran, With the Goal of Overthrowing the Iranian Government.

Article XXIV
Spying on American Citizens, Without a Court-Ordered Warrant, in Violation of the Law and the Fourth Amendment.

Article XXV
Directing Telecommunications Companies to Create an Illegal and Unconstitutional Database of the Private Telephone Numbers and Emails of American Citizens.

Article XXVII
Failing to Comply with Congressional Subpoenas and Instructing Former Employees Not to Comply.

Article XXVIII
Tampering with Free and Fair Elections, Corruption of the Administration of Justice.

Article XXIX
Conspiracy to Violate the Voting Rights Act of 1965.

Article XXXI
Katrina: Failure to Plan for the Predicted Disaster of Hurricane Katrina, Failure to Respond to a Civil Emergency.

Article XXXIII
Repeatedly Ignored and Failed to Respond to High Level Intelligence Warnings of Planned Terrorist Attacks in the US, Prior to 911.

Article XXXIV
Obstruction of the Investigation into the Attacks of September 11, 2001.

Bush Article of Impeachment I 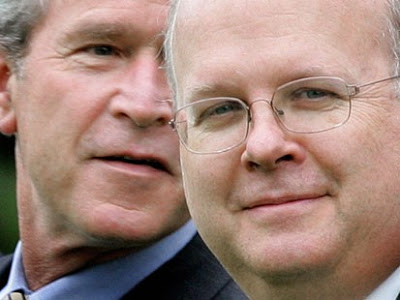 George W. Bush and Karl Rove.
ARTICLE I
CREATING A SECRET PROPAGANDA CAMPAIGN TO MANUFACTURE A FALSE CASE FOR WAR AGAINST IRAQ

The Department of Defense (DOD) has engaged in a years-long secret domestic propaganda campaign to promote the invasion and occupation of Iraq. This secret program was defended by the White House Press Secretary following its exposure. This program follows the pattern of crimes detailed in Article I, II, IV and VIII.. The mission of this program placed it within the field controlled by the White House Iraq Group (WHIG), a White House task-force formed in August 2002 to market an invasion of Iraq to the American people. The group included Karl Rove, I. Lewis Libby, Condoleezza Rice, Karen Hughes, Mary Matalin, Stephen Hadley, Nicholas E. Calio, and James R. Wilkinson.

The WHIG produced white papers detailing so-called intelligence of Iraq’s nuclear threat that later proved to be false. This supposed intelligence included the claim that Iraq had sought uranium from Niger as well as the claim that the high strength aluminum tubes Iraq purchased from China were to be used for the sole purpose of building centrifuges to enrich uranium. Unlike the National Intelligence Estimate of 2002, the WHIG’s white papers provided “gripping images and stories” and used “literary license” with intelligence. The WHIG’s white papers were written at the same time and by the same people as speeches and talking points prepared for President Bush and some of his top officials.

The WHIG also organized a media blitz in which, between September 7-8, 2002, President Bush and his top advisers appeared on numerous interviews and all provided similarly gripping images about the possibility of nuclear attack by Iraq. The timing was no coincidence, as Andrew Card explained in an interview regarding waiting until after Labor Day to try to sell the American people on military action against Iraq, “From a marketing point of view, you don’t introduce new products in August.”

NBC’s “Meet the Press: Vice President Cheney accused Saddam of moving aggressively to develop nuclear weapons over the past 14 months to add to his stockpile of chemical and biological arms.

CNN: Then-National Security Adviser Rice said, regarding the likelihood of Iraq obtaining a nuclear weapon, “We don’t want the smoking gun to be a mushroom cloud.”

CBS: President Bush declared that Saddam was “six months away from developing a weapon,” and cited satellite photos of construction in Iraq where weapons inspectors once visited as evidence that Saddam was trying to develop nuclear arms.

The Pentagon military analyst propaganda program was revealed in an April 20, 2002, New York Times article. The program illegally involved “covert attempts to mold opinion through the undisclosed use of third parties.” Secretary of Defense Donald Rumsfeld recruited 75 retired military officers and gave them talking points to deliver on Fox, CNN, ABC, NBC, CBS, and MSNBC, and according to the New York Times report, which has not been disputed by the Pentagon or the White House, “Participants were instructed not to quote their briefers directly or otherwise describe their contacts with the Pentagon.”

According to the Pentagon’s own internal documents, the military analysts were considered “message force multipliers” or “surrogates” who would deliver administration “themes and messages” to millions of Americans “in the form of their own opinions.” In fact, they did deliver the themes and the messages but did not reveal that the Pentagon had provided them with their talking points. Robert S. Bevelacqua, a retired Green Beret and Fox News military analyst described this as follows: “It was them saying, ‘We need to stick our hands up your back and move your mouth for you.'”

Congress has restricted annual appropriations bills since 1951 with this language: “No part of any appropriation contained in this or any other Act shall be used for publicity or propaganda purposes within the United States not heretofore authorized by the Congress.”

A March 21, 2005, report by the Congressional Research Service states that “publicity or propaganda” is defined by the U.S. Government Accountability Office (GAO) to mean either (1) self-aggrandizement by public officials, (2) purely partisan activity, or (3) “covert propaganda.”

These concerns about “covert propaganda” were also the basis for the GAO’s standard for determining when government-funded video news releases are illegal:

“The failure of an agency to identify itself as the source of a prepackaged news story misleads the viewing public by encouraging the viewing audience to believe that the broadcasting news organization developed the information. The prepackaged news stories are purposefully designed to be indistinguishable from news segments broadcast to the public. When the television viewing public does not know that the stories they watched on television news programs about the government were in fact prepared by the government, the stories are, in this sense, no longer purely factual — the essential fact of attribution is missing.”

The White House’s own Office of Legal Council stated in a memorandum written in 2005 following the controversy over the Armstrong Williams scandal:

Asked about the Pentagon’s propaganda program at White House press briefing in April 2008, White House Press Secretary Dana Perino defended it, not by arguing that it was legal but by suggesting that it “should” be: “Look, I didn’t know look, I think that you guys should take a step back and look at this look, DOD has made a decision, they’ve decided to stop this program. But I would say that one of the things that we try to do in the administration is get information out to a variety of people so that everybody else can call them and ask their opinion about something. And I don’t think that that should be against the law. And I think that it’s absolutely appropriate to provide information to people who are seeking it and are going to be providing their opinions on it. It doesn’t necessarily mean that all of those military analysts ever agreed with the administration. I think you can go back and look and think that a lot of their analysis was pretty tough on the administration. That doesn’t mean that we shouldn’t talk to people.”

In all of these actions and decisions, President George W. Bush has acted in a manner contrary to his trust as President and Commander in Chief, and subversive of constitutional government, to the prejudice of the cause of law and justice and to the manifest injury of the people of the United States. Wherefore, President George W. Bush, by such conduct, is guilty of an impeachable offense warranting removal from office.

Pentagon Pundit Scandal Broke the Law, the Center for Media and Democracy.

Joshua Bolton, Memorandum For Heads of Departments and Agencies: Use of Government funds for Video News Releases, March 11, 2005.

Steven G. Bradbury, Memorandum For The General Counsels of the Executive Branch, March 1, 2005.

Source. / AfterDowningStreet.org. With links to all the articles in full..

Go here for a PDF chart listing and summarizing the articles, by Elizabeth de la Vega.

Read all of the articles in a PDF.

Thanks to CodePink/Austin / The Rag Blog