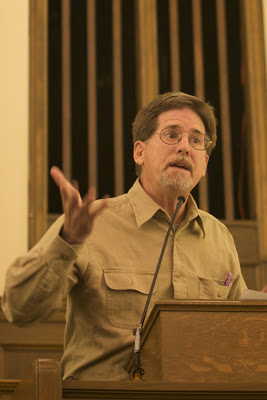 I can’t believe I am standing today in a Christian church defending the proposition that we should lessen the suffering of those who cannot afford health care in an economic system that often treats the poor as prey for the rich.

Last week supporters of health-care reform gathered around the country, including in Austin, Texas, where 2,000 people crowded into a downtown church, to hear speakers talk about different aspects of the issue. Asked to speak about the ethical dimensions of health care, I tried to go beyond short-term political strategizing and ask more basic questions. This is an edited version of what I said.

Or, let’s say someone who worked for Enron, and now is penniless, contracted bone cancer. I’ve been asked to discuss whether we are more ethical if we provide such people medicine that lessens their pain. Or would we be more ethical to let them scream through the night in unbearable agony so we can pay lower taxes?”

I can’t believe I am standing today in a Christian church defending the proposition that we should lessen the suffering of those who cannot afford health care in an economic system that often treats the poor as prey for the rich. I cannot believe there are Christians around this nation who are shouting that message down and waving guns in the air because they don’t want to hear it.

I realize that insurance reform is all that’s on the table right now, and it can be important to choose the lesser of evils when that alone is within our power in the moment. But we also need to remember our dream. I believe the American dream is not about material success, not about being having the strongest military. The American dream is that every person might have a right to life, liberty and the pursuit of happiness.

I believe the American dream was not about property rights, but human rights. Consider the words of this national hymn:

Doesn’t that sound like someone cared about the poor? There are those who consider paying taxes an affront, but listen to these words:

“O Beautiful for heroes proved in liberating strife, who more than self their country loved and mercy more than life.”

“Mercy more than life” — have you ever noticed those words before? Supporting universal health care does not make you socialist or even a liberal, it makes you a human being. And it makes you an ambassador for the American dream which, in the mind of Thomas Paine, was a dream for every human being, not just Americans.

As we struggle to get health care to all people, we may have to settle for the lesser of two evils, but remember your dream — the true American dream, a human dream. Whatever we win through reform is just a first step toward a day when every human being has a right to life, liberty and the pursuit of happiness.

[The Rev. Jim Rigby is pastor of St. Andrew’s Presbyterian Church in Austin. He can be reached at jrigby0000@aol.com.]