Revising History in Texas : Christ in the Classroom 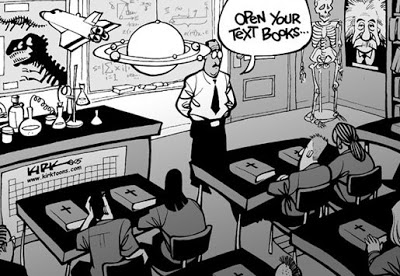 Last week, Stephen Colbert tipped his ironic hat to the Texas State Board of Education. The board had already allowed creationism to be considered in Texas biology classes, the comedian said approvingly, and now it was pushing for more Christianity to be taught in U.S. history. But why stop there? Colbert asked. What about math? Five plus two doesn’t have to equal seven — not if you’re Jesus. And for that matter, what about penmanship? Why not teach students to really CROSS their T’s?

There’s truthiness in those jokes. Of the six people who the board appointed as “experts” to review the current curriculum, three are on record as Christian soldiers, battling to bring back a golden age of God in American government. — Houston Chronicle.

The Christian right is making a fresh push to force religion onto the school curriculum in Texas with the state’s education board about to consider recommendations that children be taught that there would be no United States if it had not been for God.

Members of a panel of experts appointed by the board to revise the state’s history curriculum, who include a Christian fundamentalist preacher who says he is fighting a war for America’s moral soul, want lessons to emphasize the part played by Christianity in the founding of the U.S. and that religion is a civic virtue.

Opponents have decried the move as an attempt to insert religious teachings into the classroom by stealth, similar to the Christian right’s partially successful attempt to limit the teaching of evolution in biology lessons in Texas.

One of the panel, David Barton, founder of a Christian heritage group called WallBuilders, argues that the curriculum should reflect the fact that the U.S. Constitution was written with God in mind including that “there is a fixed moral law derived from God and nature,” that “there is a creator” and “government exists primarily to protect God-given rights to every individual”.”

Barton says children should be taught that Christianity is the key to “American exceptionalism” because the structure of its democratic system is a recognition that human beings are fallible, and that religion is at the heart of being a virtuous citizen.

Another of the experts is Reverend Peter Marshall, who heads his own Christian ministry and preaches that Hurricane Katrina and defeat in the Vietnam war were God’s punishment for sexual promiscuity and tolerance of homosexuals. Marshall recommended that children be taught about the “motivational role” of the Bible and Christianity in establishing the original colonies that later became the US.

“In light of the overwhelming historical evidence of the influence of the Christian faith in the founding of America, it is simply not up to acceptable academic standards that throughout the social studies (curriculum standards) I could only find one reference to the role of religion in America’s past,” Marshall wrote in his submission.

Marshall later told the Wall Street Journal that the struggle over the history curriculum is part of a wider battle. “We’re in an all-out moral and spiritual civil war for the soul of America, and the record of American history is right at the heart of it,” he said.

Dan Quinn of the Texas Freedom Network, which describes itself as a “counter to the religious right,” called the recommendations “troubling.”

“I don’t think anyone disputes that faith played a role in our history. But it’s a stretch to say that it played the role described by David Barton and Peter Marshall. They’re absurdly unqualified to be considered experts. It’s a very deceptive and devious way to distort the curriculum in our public schools,” he said.

Quinn says that the issue is likely to lead to a heated political battle similar to the one in which the religious right tried to force creationism onto the curriculum. While it wasn’t able to inject religious theories into the classroom, the Texas school board did make changes to teaching designed to undermine lessons on evolution such as introducing views that the eye is so complex an organ it must have involved “intelligent design”.

“I think, as there was with science, there’s going to be a big political battle,” he said.

Social studies teachers will meet shortly to consider the panel’s views and make their own recommendations to the board of education which has the final say. The board is dominated by conservatives who appointed Barton and Marshall to the panel.

Other states will be watching what happens in Texas carefully as the religious right campaign seeks new ways to insert God into the classroom after the courts limited the extent to which creationist theories could intrude on the teaching of biology. But religion is not kept out of schools entirely. Many children recite the pledge of allegiance in class each morning which includes a reference to the U.S. as “one nation under God.”

The panel made other recommendations.

Barton, a former vice-chairman of the state’s Republican party, said that Texas children should no longer be taught about democratic values but republican ones. “We don’t pledge allegiance to the flag and the democracy for which it stands,” he said.

And while God may be in, some of those he influenced are out.

According to a draft of guidelines for the new curriculum, Washington, Lincoln and Stephen Fuller Austin, known as the Father of Texas after helping to lead it to independence from Mexico, have been removed from history lessons for younger children.

There’s no doubt that history education needs a boost in Texas.

According to test results, one-third of students think the Magna Carta was signed by the Pilgrims on the Mayflower and 40% believe Lincoln’s 1863 emancipation proclamation was made nearly 90 years earlier at the constitutional convention.