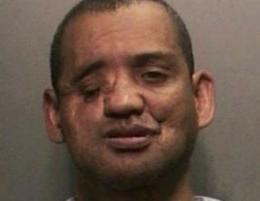 ‘This form of justice has become commonplace in Harris County with its history of unforgivable crime lab mistakes and outright malfeasance, of evidence lost or withheld, of bloodthirsty prosecutors and juries eager to keep the lethal injections flowing.’

Ricardo Rachell has spent five years in prison, even though DNA evidence existed all along that could have proven his innocence. According to the Houston Chronicle, DNA tests now prove that Rachell could not have committed the crime of which he was accused, and, as a result, he was scheduled for release today.

This is another mind-boggling example of justice misfired: in this case, a man convicted of sexual assault of a child based only on the testimony of an eight year old and his friend who didn’t even mention the man’s severely disfigured face in their testimony.

The District Attorney’s office admits it was aware of the DNA evidence all along, but says that its existence was mentioned in offense reports and that the defense could have requested testing. Defense attorneys however say they were not made aware of the evidence. And what kind of justice system is it anyway when prosecutors feel driven to seek convictions at all costs, where their response to the existence of possibly exculpatory evidence is, “Well, they didn’t ask.”

This form of justice has become commonplace in Harris County with its history of unforgivable crime lab mistakes and outright malfeasance, of evidence lost or withheld, of bloodthirsty prosecutors and juries eager to keep the lethal injections flowing.

The Houston Press described the qualifications for Harris County District Attorney as follows: “The job description was clear — kill as many defendants as possible, talk tough on crime, have an ‘R’ after your name on the ballot and you’re there for life.” But DA Chuck Rosenthal didn’t have the charm and political skills – or the exquisite mustache – of his predecessor, the legendary John B. Holmes, though they shared the same “hang ‘em” approach. And his “life” as Harris County DA was cut short.

The clumsy Rosenthal stumbled out of office in the face of a scandal involving a proliferation of racist and pornographic emails. And, even though Harris County largely turned to Democrats in the recent election, Rosenthal’s successor is Pat Lykos, a Republican district judge who professes a commitment to reform.

In recent years virtually all Harris County judges have been Republicans, and they have a proven “law and order” track record, inclined, as a rule, toward convictions, long sentences and parole revocation based on technical violations. They do a fine job of feeding the Texas prison complex, a voracious big bucks operation designed as a continually self-fulfilling prophecy.

But this is not a Houston or a Texas problem; it’s symptomatic of a major crisis in our criminal justice system with its cockamamie “war on drugs,” its tunnel-visioned and racially-charged mega drive to imprison first and foremost. Rehabilitation isn’t even in the equation. The whole thing’s fueled by money.

As for the case of Ricardo Rachell, it highlights the extreme unreliability of eyewitness accounts and the sloppiness with which evidence is handled. But bottom line, it points to a serious societal question of professional ethics, as district attorneys, politically driven, become so willing to overlook the “justice” part of criminal justice.

Five years after he was wrongfully convicted of sexually assaulting a child, Ricardo Rachell will be released from custody today.

Prosecutors and Rachell’s attorney appeared before state District Judge Susan Brown this morning to request the 51-year-old Rachell’s release on a personal recognizance bond after DNA tests cleared him of committing the 2002 attack.

The judge agreed and the Harris County Sheriff’s Office began the process of organizing his release.

Rachell, who was brought to Houston Wednesday night from a prison in Tennessee Colony, in East Texas, did not attend the hearing, nor did any members of his family.

After the hearing, Assistant District Attorney Roe Wilson said her office will work to ensure that Rachell’s conviction is overturned.

“Our goal is to make sure justice is done. And today, that means making sure Mr. Rachell is out of custody and returned to his family,” Wilson said.

Wilson could not say why DNA evidence available in 2002 was not tested until this year.

“That is a really good question,” she said. “It should have been tested. The defense attorney also could have requested testing.”

Rachell’s original defense attorney, Ron Hayes, said he knew nothing of the biological samples before the 2003 trial.

“It was not disclosed in any offense report that I saw,” Hayes said. “If I had been aware, I would have pushed for DNA testing, without question. I am disappointed that somehow it did not come to somebody’s attention who could have done something about it sooner.”

But Wilson said today that Houston police offense reports, which were available to defense counsel, included the fact that biological evidence had been collected.

In 2003, jurors convicted Rachell, who was severely disfigured by a shotgun blast to the face years before, largely based on eyewitness testimony from the 8-year-old victim and one of his friends.

Five years later, DNA tests show that Rachell could not have committed the crime and instead point to another man who is serving time for committing similar attacks, Rachell’s lawyer Deborah Summers said.

“This is the last case I thought would come back this way,” Summers said on Thursday. “When I took this case, I didn’t even know if there would be evidence to test. But (Rachell) just kept fighting and plugging away and kept demanding his rights. I am really pleased this worked out for him.”

The biological samples that cleared his name were collected by the Houston Police Department after the October 2002 attack on the boy, who had been lured into a vacant south Houston home by a stranger.

Until recently, however, those samples hadn’t been tested. Their existence was never mentioned at trial.

The district attorney’s office confirmed today that it knew of the evidence in 2002. District Attorney Kenneth Magidson said in a written statement on Thursday that it was a mistake not to test the rape kit before trial.

“As soon as the evidence was found to exonerate him, we acted as swiftly as possible to see that justice is done in this case,” he said.

Summers, who was not available for comment after this morning’s hearing, said on Thursday that she did not know of any physical evidence when she atook the case.

“I wasn’t giving Mr. Rachell a great deal of encouragement because I thought, if there had been DNA collected, surely it would have been raised before now,” she said.

HPD has a history of not testing biological evidence despite its availability in a high number of cases, according to an independent investigation of its crime lab, which officials shuttered two months after the attack in which Rachell was accused.

“The crime lab’s failure to generate … results in cases where it was possible to conduct such testing … is very troubling,” wrote a former U.S. Justice Department official at the conclusion of a $5.3 million investigation of the crime lab. “This failure has implications both for ensuring that the guilty are convicted and that the innocent are exonerated.”

Rachell’s legal troubles began Oct. 20, 2002, when a stranger asked the child victim if he would be interested in earning money by helping move some trash, according to prosecutors. The boy agreed. The man took him to a vacant house and sexually assaulted him.

The next day, the boy’s family called HPD to say the youngster saw his attacker, Rachell — a man with a disfigured face known to some for riding his bicycle around the neighborhood, according to his attorneys.

Police arrested Rachell and he was charged with aggravated sexual assault of a child. Biological evidence was collected, as was a reference sample from Rachell, for comparison to the evidence. But it never was used.

The core of the case against Rachell were the identifications from the 8-year-old and his friend. He went to trial in June 2003 and began serving his 40-year sentence, all the while pursuing various appeals.

“I always had questions about this whether he was innocent,” she said. “The child omitted any mention of the facial disfigurement.”

In addition, Reagin said, there was another man known to be committing similar crimes in the area at the same time.

Reagin raised those arguments, but Rachell’s conviction was affirmed. Rachell then pursued the possibility of post-conviction DNA testing and a judge appointed Summers to his case.

This March, prosecutors contacted Summers to say they had located evidence and wanted to move forward with testing. The results came back last month. Prosecutors have not said whom the tests implicates, but they have reopened the case.

Prosecutors also said they will support Rachell should he seek a full pardon. That would fully clear his name and entitle him to almost $300,000 in reparations from the state, if he agrees not to file any lawsuits.