See also Dr. Stephen R. Keister’s remarks below about Richard L. Scott. All of this is rather enlightening to say the least. 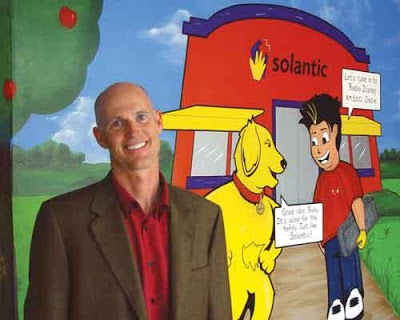 Rush Limbaugh offers Democrats an irresistible target as the de facto leader of the Republican Party, but for my money, Rick Scott is the man who best embodies the spirit of the current conservative opposition. The name may not exactly be a household word, or it may ring a faint bell, but Politico recently reported that the millionaire Republican would be heading up Conservatives for Patients’ Rights (CPR), a new group that plans to spend around $20 million to kill President Obama’s efforts at healthcare reform.

Having Scott lead the charge against healthcare reform is like tapping Bernie Madoff to campaign against tighter securities regulation. You see, the for-profit hospital chain Scott helped found–the one he ran and built his entire reputation on–was discovered to be in the habit of defrauding the government out of hundreds of millions of dollars.

This is the man who will be delivering what Politico called the “pro-free-market message.”

A Texas lawyer who shared a business partner with George W. Bush, Scott started his health company, Columbia Hospital Corporation, in 1987. Its growth was meteoric, expanding from just a few hospitals to more than 1,000 facilities in thirty-eight states and three other countries in 1997. As his firm gobbled up chains, like the Frist family’s Hospital Corporation of America (HCA), it became the largest for-profit hospital chain in the country. By 1994, Columbia/HCA was one of the forty largest corporations in America, and Scott had acquired a reputation as the Gordon Gecko of the healthcare world. “Whose patients are you stealing?” he would ask employees at his newly acquired hospitals.

He promised to put nonprofit hospitals–which he insisted on referring to as “nontaxpaying” hospitals–out of business and touted his company’s single-minded pursuit of profit as a model for the nation’s entire healthcare system. “What’s happening in Washington is not healthcare reform,” he told the New York Times in 1994. “Healthcare reform is happening in the marketplace.”

The press portrayed Scott as a guru to be admired and feared, “a private capitalist dictator,” in the words of one Princeton health economist. “Probably the lowest body fat of anybody I’ve been in business with,” his partner told the Times.

“Other hospitals were intimidated,” recalls John Schilling, who worked for Columbia/HCA in the 1990s. Scott was “like the bully that would come into town and if you didn’t sell to him or partner with him, he would open up shop across the street from you and put you out of business.”

Not long after joining the company in 1993 as the supervisor of reimbursement for the Fort Myers, Florida, office, Schilling noticed things weren’t quite kosher. “They were looking for ways to maximize reimbursement…which ultimately would improve the bottom line.”

One way they did this was to fudge the costs on their Medicare expense reports. They were “basically keeping two sets of books,” says Schilling. The company would maintain an internal expense report, what it called a “reserve” report, which accurately tallied its expenses. “And then they would have a second report, which…they would file with the government, which was more aggressive.” That report would “include inflated costs and expenses they knew weren’t allowable or reimbursable. The one they filed with government might claim $5 million and the reserve would claim $4.5.” Columbia/HCA would pocket the difference.

It wasn’t just happening in Florida, and it wasn’t just fraudulent Medicare expense reports. Around the country, dozens of whistle-blowers like Schilling stepped forward to file lawsuits under the False Claims Act, charging the company with sundry forms of chicanery: kickbacks to doctors in exchange for referrals, illegal deals with homecare agencies and filing false data about the use of hospital space.

By 1997 the FBI was investigating Columbia/HCA. Days after agents raided company facilities armed with search warrants, Scott was forced to resign. In 2000 the company pleaded guilty to fraud and agreed to pay the government $840 million. Other civil settlements would follow, ultimately totaling a staggering $1.7 billion, making it the largest fraud case in American history.

(Scott was never criminally charged and continues to deny wrongdoing. His spokesperson did not respond to repeated interview requests.)

But in Washington there’s no such thing as permanent disgrace, and as the healthcare debate heats up, Scott has established himself as a go-to source for reporters looking to hear from the opposition. He’s been quoted in the Wall Street Journal and the Washington Post. He’s been on Fox, of course, railing against President Obama’s efforts to control healthcare costs. He appeared on CNN, where (as Media Matters noted) host Jessica Yellin never saw fit to notify viewers that the man she introduced as running “a media campaign to limit government’s role in the healthcare system” once ran a company that profited mightily from ripping off that government.

Indeed, if there’s one thing that’s most galling about Scott’s antigovernment jihad–and most emblematic–it’s that for all his John Galt bluster, he made his fortune (which, yes, he still has) in no small part thanks to steady contract fees from the Great Society’s entitlement programs.

Congressman Pete Stark, a veteran of the last bruising round of fighting over healthcare reform, remembers Scott all too well. Stark recently sent his colleagues a letter hoping to refresh their memories. Calling Scott a “swindler,” the letter said, “If he is the conservative spokesperson against healthcare reform, there is no debate.”