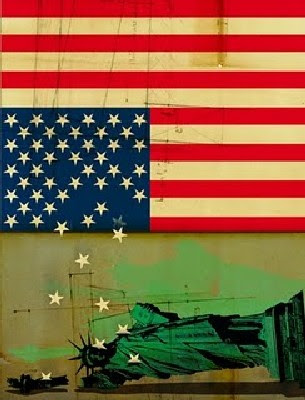 “Dissent is terrorism.” Art by Anthony Freda / Activist Post.
Battlefield America:
‘We had to make some sacrifices…’


There are no more legal barriers to arrest without warrants, prison without lawyers, condemnation and even execution without trial.

There was a declaration in the Congress during the passage of the National Defense Authorization Act, to the effect that in the “war on terror” the United States was a part of the field of battle.

This statement was made by Senator Lindsey Graham, among others. It was consequent to the continuing fantasy that we now live in a “post-9-11 world” which, presumptively, means that the laws which have protected Americans from their government for 200 years no longer apply.

Sorry about your freedom, but we had to make some sacrifices to keep you free.

Because of 9-11, we were told, we needed the grotesquely-named “Patriot Act” which took large pieces out of the Bill of Rights. In order to be safe from the “enemy” we had to give up the Constitution. The Patriot Act was passed as emergency legislation with no debate. The senators and representatives who voted for it did not read it. For that alone, they deserve impeachment and removal from office.

But betraying the country is no longer a crime when it’s done by the government.

It seemed at the time like an odd construction, the insistence that America’s own turf was now a part of the battlefield, but that’s what Graham and others insisted.

There were reasons for this.

For one thing, as the NDAA legislation makes clear, the protection afforded Americans from the use of the army against us, the so-called Posse Comitatus Act, has effectively been nullified. Last month, the army conducted “exercises” with Homeland Security operatives and the L.A. police force in a section of downtown Los Angeles.

For another, by calling the United States part of the battlefield, the president, any president, can direct the army to arrest and detain without trial any citizen “suspected” of actions in “support” of an “enemy.” The person imprisoned with no rights, in violation of the most fundamental clauses of the Constitution, can’t get judicial review and may never be released because the “war” against “terror” is a war which will by definition never end.

Last time I looked, only fascist countries and totalitarian regimes did these sort of things. I must’ve been mistaken.

A week ago, in testimony before the Senate Judiciary Committee, Steven G. Bradbury, former acting assistant Attorney General, principal deputy for the Office of Legal Counsel, and one of the authors of the infamous Bush “torture memos,” told Senators that an amendment to the NDAA which would exempt American citizens from indefinite detention without charge or trial would be a mistake.

…the evident purpose of the legislation is to prevent the President from detaining as an enemy combatant under the laws of war, without criminal charge, any American citizen or lawful permanent resident of the United States who is apprehended in this country, even if the person is captured while acting as part of a foreign enemy force engaged in acts of war against the United States, such as a U.S.-based terrorist recruit of al Qaeda acting to carry out an armed attack within our borders…

Bradbury believes such a limit would hamper the President in waging the war against terror. America’s a battlefield, he believes, echoing the words of Graham and Chuck Grassley, the senator who brought him in to testify, and that means that anyone on the side of the “enemy” should not be able to count on the protection of the Bill of Rights.

According to an article on the hearing by Kevin Gosztola in Firedoglake, Graham, who was present, “contended the ‘homeland’ was part of the battlefield and reading Miranda rights is not the best way to collect intelligence. He firmly asserted that homegrown terrorism could be a problem and he wanted the legal system to recognize ‘the difference between fighting a crime and fighting a war.'”

No, reading a suspect ‘Miranda rights’ was never the best way to get a confession, either. A rubber hose or simple, repetitive beatings, or simulated drownings, for that matter, could get people to confess to anything just to make it stop. The use of torture, which Obama claimed to oppose but which his administration continues to authorize, is good only for the purpose of satisfying the perverse, sadistic interests of the torturers; nobody in law enforcement thinks it extracts much truth.

Bradbury testified that since President Obama believes he has the authority to order the killing of American citizens in other countries — such as the victims of U.S. targeted drones in Yemen — it doesn’t make sense that such a target could become entitled to constitutional rights simply by “making it to the homeland.”

See where this is going?

If the “war” against “terror” is fought everywhere on earth, and if Americans can be legally killed by order of the President on foreign soil, then the President can order the killing of American citizens anywhere, including the United States. 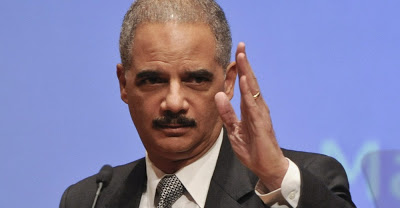 Attorney General Eric Holder. Image from MSNBC.
That was the point of Lindsey Graham’s continued harping on the “battlefield” terms; that was the point of the NDAA and its lightning-swift passage through a somnolent and hopelessly corrupt Congress which barely raised any questions. If America is part of the battlefield, whatever may be legally done on a battlefield may be done here, right here, maybe in L.A. or Oakland, or wherever you live.

True, the use of drone attacks might have to be minimized; too much political fallout from killing a bunch of neighbors along with the “enemy” suspect.

A year ago, the idea that the President had initiated use of death lists, lists of people who were to be killed by the CIA, was considered fanciful or paranoid. Such a claim in the New Yorker by Pulitzer Prize winner Sy Hersh, drew little public response and no Congressional outcry. Now, it’s a conceded fact. And still very few object.

Now, Attorney General Holder, obviously speaking for Obama, tells Congress that the President has the right to order the assassination of whomever he wants. And if America’s now in a permanent state of war, and if that war is taking place right here, in the Fatherland, then there is nothing to prevent Obama — or any future president — from killing people, or simply letting the army do it.

Obama and Holder are telling us that in plain English. Right now, with the Patriot Act and NDAA, the U.S. is considered part of the “battlefield,” which means that the army may do to anyone suspected of wrongful behavior, or of planning such behavior, whatever it wishes. That gives the formerly proscribed act known as prior restraint a whole new meaning.

There are no more legal barriers to arrest without warrants, prison without lawyers, condemnation and even execution without trial. It is a situation so antithetical to what America has by law always been that it is beyond belief. Yet it is so.

Now, let me be clear. An operation using lethal force in a foreign country targeted against a U.S. citizen who is a senior operational leader of al-Qaeda or associated forces and who is actively engaged in planning to kill Americans would be lawful at least in the following circumstances: first, the U.S. government has determined after a thorough and careful review that the individual poses an imminent threat of violent attack against the United States; second, capture is not feasible; and third, the operation would be conducted in a manner consistent with applicable law of war principles.

The government “has determined.” “Careful review.” “Capture is not feasible.”

Some have argued that the president is required to get permission from a federal court before taking action against a United States citizen who is a senior operational leader of al-Qaeda or associated forces. This is simply not accurate. Due process and judicial process are not one and the same, particularly when it comes to national security. The Constitution guarantees due process. It does not guarantee judicial process.

If due process under the American system, under the Bill of Rights, does not consist of judicial process, of what does it consist? For Holder and Obama, it consists of their own judgment. Don’t worry. Your government will not mistreat you.

Some have called such operations “assassinations.” They are not. And the use of that loaded term is misplaced. Assassinations are unlawful killings. Here, for the reasons that I have given, the U.S. government’s use of lethal force in self-defense against a leader of al-Qaeda or an associated force who presents an imminent threat of violent attack would not be unlawful, and therefore would not violate the executive order banning assassination or criminal statutes.

“Self-defense” against someone who has yet done nothing but who “presents an imminent threat” as determined by, well, by the government.

And Barack Obama, on the heels of drone attacks which have specifically targeted not only individuals, such as the 16-year-old son of Anwar al-Awlaki, but funeral processions and first responders, such as medical teams, had this to say:

I want to make sure that people understand, actually, drones have not caused a huge number of civilian casualties. For the most part, they have been very precise precision strikes against al-Qaeda and their affiliates. And we are very careful in terms of how it’s been applied.

So, I think that there’s this perception somehow that we’re just sending in a whole bunch of strikes willy-nilly. This is a targeted, focused effort at people who are on a list of active terrorists who are trying to go in and harm Americans, hit American facilities, American bases, and so on. It is important for everybody to understand that this thing is kept on a very tight leash.

People who have not attacked America but who “are trying to go in and harm Americans” based on the secret information that we have. The President wants people to understand.

I understand, all right. Here’s Hina Shamsi, an ACLU lawyer, on Democracy Now!:

President Obama has used more targeted killings than the Bush administration ever did. And we do not have the memos, the Office of Legal Counsel memos, that justify the targeted killing policy. And so, very disappointingly, we see the administration claiming a broad and dangerous authority without adequate public transparency, disclosure, and refusing to defend its authority in the courts.

We do not get to see the memos, the memos that “justify” murdering, that is using “lethal force” against Americans, drafted by a government agency. Thanks for the transparency, Mr. President, that you promised. But don’t worry, we trust you. You would never lie to us. You would never violate the constitution. You want to make sure that people understand.

I understand, all right, and so do plenty of other people. This Constitution means something to us, brother, and we’re not giving it up just yet.