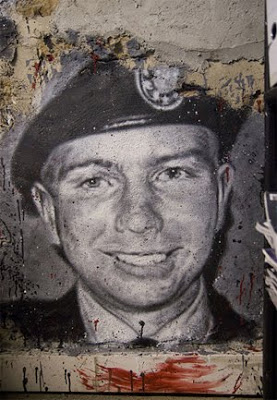 Anyone who might expose inconvenient ‘secrets’ — truths — is an enemy of the state, and what is being done to Bradley Manning, right in front of us, is meant to discourage and to intimidate.

Once upon a time, the grand jury was a safety device, a mechanism through which members of a community, behind closed doors, could review the evidence being gathered by a prosecutor and ensure that the rights of the individual were protected.

Predictably, humans being what we are, this intention was long ago subverted when prosecutors discovered that grand juries could be brought to do pretty much anything since the evidence they see is controlled by the state and the targets of the state have no lawyers present to help them.

The Obama government has empaneled a grand jury in Alexandria, Virginia. Since it might have chosen any venue, Alexandria is especially fortuitous for the prosecutors because its population has the highest concentration of government employees in the nation.

Obama is going after Bradley Manning, the Pfc. accused of leaking documents, including the infamous video of U.S. soldiers aboard an Apache attack helicopter joyously committing murder, to Wikileaks, and his Justice Department is using this grand jury to do it.

The U.S. government doesn’t want the American people to know what it’s doing. That is perfectly understandable since much of what it is doing won’t stand the light of day.

Bradley Manning has been in custody, without official charges and without being given any of the ordinary rights of an accused, for more than a year. Much of that time was spent at Quantico, Virginia. He was recently moved to Leavenworth, Kansas. The conditions of his imprisonment have been condemned as torture and as a violation of international law by Amnesty International and other such organizations. It is quite plain that the Obama government’s policy has been to destroy him psychologically since it cannot break him lawfully.

I have no idea whether Manning was the main source of the treasure trove of “secret” documents Wikileaks has been releasing. Whoever did this is a hero to the human race. In the U.S., however, rattle-brained pols such as Mike Huckabee are calling him a traitor and demanding that he be executed.

The Alexandria grand jury has been taking testimony from people who themselves are being deprived of their rights. Witnesses are issued “immunity certificates” which nullify their 5th Amendment right against self-incrimination, which coerces compliance with the government’s operation.

The U.S. government doesn’t want the American people to know what it’s doing because if that were to happen there might be serious consequences.

During the Vietnam War, shortly after the Tet Offensive in early 1968, a CBS camera captured video of the Saigon Police Chief summarily executing a bound suspect, shooting him in the head. Although the American people had seen much of the war on television and certainly knew of its brutality, something about this particular film registered with surprising power. Perhaps it was because it is one thing to hear or read of something, to “know” it intellectually, and another to witness it.

The stunning Wikileaks video which recorded the cold blooded murder of more than a dozen innocent people, including several who had stopped their van to try to aid the wounded, and which included the voices of the crew — U.S. soldiers asking for permission to shoot and exulting in their kills — was an ugly contradiction to the bland, phony “Support Our Troops” propaganda with which we are daily assaulted in the mass media.

The Obama government did not investigate the killings or punish the perpetrators; it sought to find and punish those who made it public.

Even now, even with the publication of much of the Wikileaks revelations in some areas of the U.S. and on the internet, it is not at all widely known that the U.S. government and the Pentagon have been systematically covering-up the enormity of the civilian deaths in Iraq. Internal Pentagon documents show that more than 100,000 such deaths have simply gone unrecorded in the figures released to the public, although the actual numbers are internally collected.

During the Vietnam era, the military cooked the books to show far more “enemy” dead than was true in order to make it look like the war was being won. Today, the books are being cooked to make civilian deaths disappear as though they did not happen.

Control of the news is vital to any government which is undemocratic and wishes to disguise what it is doing. When the information escapes into the public space, the lies which support tyranny begin to fail. This is what has happened in much of the Middle East, and although the western media never mentions it, some of the Wikileaks exposure has helped fuel the pro-democracy movements in Egypt, Syria, and elsewhere.

In America there has been a concerted effort to control the news, both through the privatization of the public space — ownership of CNN, NBC, and all the rest in few, corporate hands — and by suppression by the government and its agents of dissent.

Anyone who might expose inconvenient “secrets” — truths — is an enemy of the state, and what is being done to Bradley Manning, right in front of us, is meant to discourage and to intimidate.

By the way, a second federal grand jury has been set up by the Obama regime, this one investigating “antiwar” activists.

Two days ago, the nation’s birthday celebration. Hope you enjoyed the fireworks.