Richard Raznikov : From Berkeley to London, a Word From Our Sponsors 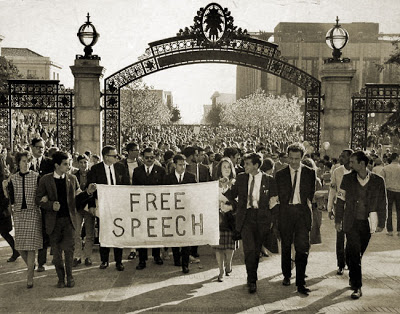 The Free Speech Movement at the University of California at Berkeley, 1964. Image from the New SDS Website.

From 60’s Berkeley to the London ‘riots’:

A word from our sponsors

Whoever controls the media controls the story the public sees and hears. Whatever ‘news’ we get is filtered through the propaganda requirements of those who own it.

The first time I personally experienced the unreliability — i.e. lies — of the media was as a freshman at U.C. Berkeley in October 1964. Along with about a thousand others, my friend JBD and I found ourselves in the middle of what was to become the Free Speech Movement.

The University had embarked on a mission, spurred by its corporate sponsors, to impede the recruitment of civil rights volunteers on campus. Students were already in the forefront of demonstrations against racial discrimination in San Francisco at the Sheraton Palace, on auto row, and at Zim’s Restaurants, and the targets had grown to include businesses in Oakland’s Jack London Square and the Oakland Tribune newspaper.

Powerful people were pissed off, and they leaned on the University’s administration to put a stop to it.

Being in the middle of this historic development was an intoxicating experience, and JBD and I participated in sit-ins and demonstrations, and passed out leaflets. We were among the first batch of students to surround a police car with our bodies, preventing the removal of one Jack Weinberg, who had been arrested for violating university rules when he sat at a recruitment table for either the Student Nonviolent Coordinating Committee (SNCC) or the Congress of Racial Equality (CORE) — I can’t recall which.

The October 1st capture of the police car in a spontaneous circle of students generated nationwide press coverage, and most of America learned of the incipient student revolt on their evening news programs. What they learned was a little bit different from what we were experiencing in Sproul Plaza.

The public heard that we were a bunch of ungrateful brats, outside agitators, and Communist dupes. The quite significant issues of freedom of speech and of constitutional rights in general, although they were the central point of the protests and of the speeches given by Mario Savio and others, standing atop the imprisoned squad car, were completely ignored.

We were too busy to watch ourselves on the news but we soon discovered how we were being portrayed. Personally, I didn’t mind the brat thing, but I resented anyone regarding me as a dupe. Not to mention that one of the friends I’d made in the FSM was a member of the steering committee who was a libertarian — and happened to belong to “Students for Goldwater.”

Whoever controls the media controls the story the public sees and hears. I am reminded of that daily, following events in England, in Israel, in Libya, in Syria, in Egypt, in Haiti, in Greece. Whatever “news” we get is filtered through the propaganda requirements of those who own it, those who sponsor it, and those whose threats can promote or make vanish a given narrative.

In other words, you can’t take at face value anything you see on television or coming from the mouths of politicians. They are lying to you. That’s a part of their job.

I wrote a piece called “London Burning” and got a pretty fast response from people who took issue with my slant on events. One of them was my old friend JBD himself, whose quite reasonable question was, mainly, how sympathetic would I be if the looters were looting and/or burning down my shop.

Answer: I wouldn’t be very sympathetic; I’d be pissed off.

But, here’s the thing: I didn’t write favorably about looters. I don’t even know how much looting has taken place, and neither do you. I know what the Cameron government is saying, but they are notorious liars to begin with. I also know that the media, in collusion with government, can make a snowplow look like a Trailways bus.

My point was this: the England riots are political.

What the media coverage is leaving out, among other things:

Last fall there were demonstrations across England by students angry about prospective cuts in social services. The level of outrage surprised the Cameron regime which, along with other European governments, has been implementing so-called “austerity” measures, the translation being that in order to satisfy the bankers and other corporate thugs the few crumbs formerly doled out to the poor will now be taken away.

Then, on March 26th of this year, half a million demonstrators — many of them trade unionists — converged on London to protest the slashing of government programs and social services. They were joined by huge numbers of the young, especially students. 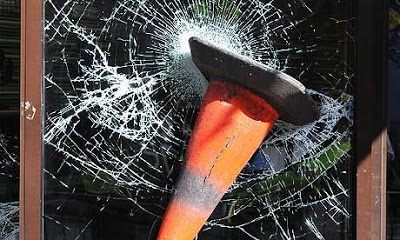 In a prescient article two months ago in the Indypendent, Peter Bratsis wrote:

One thing is certain, however: The March 26 protest will have as little impact on policymakers as the antiwar demonstrations did. Within the “democratic” world at least, orderly popular protests have proven to be of little consequence when it comes to influencing policies.

He then observed that while many union participants would abandon the field, having come to London and “done all that they could,” the events would lead to further radicalization of those who were most directly victimized by the government’s actions and targeted by police.

Partly as a response to the heavy-handed actions of the police and partly as a product of principled political reflection and organization, the extra-parliamentary left, especially anarchism, is on the rise. There were hundreds of mask-wearing protesters willing to engage in property destruction and risk arrest.

Their occupation of Fortnum and Mason, one of the most famous stores in London, and their attack on the Ritz Hotel and dozens of stores on Oxford Street, especially those known for not paying any taxes, is a clear sign that the movement is growing. Although there may still be far to go before the streets of London look like those of Seattle in 1999 or Athens in 2008, major progress is being made.

Historically, ideology is always an unsteady partner to rebellion. Indeed, if revolution waited for the development of a broad-based intellectual theory it would wait forever. Most American colonists had not read Tom Paine’s “Common Sense,” and those Russians who stormed the Winter Palace had by and large never heard of Karl Marx.

According to the historian Karl Polanyi, the working class in Britain has been the most repressed and beaten down in all of Europe. Polanyi asserts that this has rendered them nearly incapable of any self-directed, progressive, political action. Nonetheless, we have seen flashes of political possibilities, such as the poll tax riots of 1990 that brought down Margaret Thatcher and the fierce but unsuccessful coal miners’ strike of 1984-85 that broke organized labor in the U.K.

The stakes of the current attack on working people are clear. Orderly demonstrations and petitions are not sufficient for fighting the power of the ruling classes and their… servants within Parliament. A new chapter in disruptive, disciplined and disorderly political action by the dominated is necessary. If marching is as far as the political efforts go, the overcrowded classrooms, shrinking universities, declining life expectancy and decreasing wages and pensions will be all the evidence we need for understanding how the class struggle in Britain is progressing.

More than 16,000 police have been deployed to retake the streets of London. More than 1,700 arrests have been carried out, and magistrates have already tried and sentenced some to prison. A majority of the arrestees are minors. One such was sent to jail for six months for stealing bottled water. Prisons and juvenile detention centers are running out of cells for the inmates.

London police have conducted raids specifically against low-income housing projects, and concerns over civil liberties of the accused have been brushed aside by the Cameron regime in the wild rush to convict and imprison those accused. The prime minister declared that “phony concerns about human rights” wouldn’t be permitted to get in the way.

Despite the cover stories promoted by the British government and the widespread media complicity in reducing the rioters to “mindless” criminals and “anarchists,” the enormity of the rebellion — and its use of social networks and Blackberry messaging services — suggests something with clearer direction and better organization.

The British government is working on policies which will shut down these web sites and services to impede future actions, much the same way the Egyptian government sought to save Mubarak’s miserable skin. It didn’t work in Egypt but maybe the English will have better luck.

The U.S. government has, of course, embarked on the same course, and the mass media in this country are complicit in distorting the news out of London. After all, the same kind of phony “austerity” policies being used in Europe to screw the last dime out of the poor and the seemingly powerless are being tried in America by the Obama regime and its Republican allies. Don’t think for a minute we’re not being set up. In England, the economics editor at

The Guardian (and a part-time magistrate) wrote:

From the bench, what magistrates see is a raging bundle of id impulses, the desire for immediate gratification untempered by a sense of guilt and with only an ill-formed notion of right and wrong. The temptation to bang them up and throw away the key is strong, and magistrates will no doubt be encouraged to do just that over the coming weeks.

Don’t be fooled by the press releases. Crisis is manufactured in order to seize money or to get rid of civil liberties, often both. When people fight back with whatever rudimentary weapons are at their disposal, it is essential that they be divested of reason and marginalized as criminals. That’s what the mass media do these days — create and promote the cover stories of their sponsors.

No, I do not personally think that looting businesses is a good idea, a sound tactic, or a morally-defensible position. But I’m not going to pretend that there isn’t a reason for it.

1 Response to Richard Raznikov : From Berkeley to London, a Word From Our Sponsors