Rick Ayers :
Crimea, Obama, and the nostalgia for World War I

The poet Wilfred Owen had the courage to look reality in the face. What can he tell us? 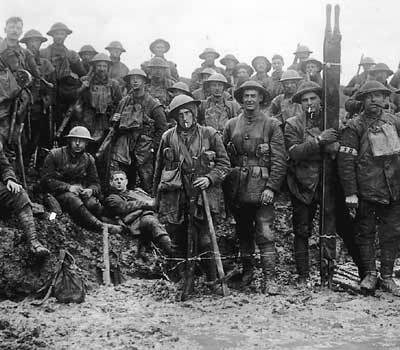 It is fitting that President Obama should quote the poem “In Flanders Fields” while visiting Belgium and invoking World War I history in seeking to rally Europe into a united front against Russia.

There is something thrilling, almost comforting, for the West to return to the rhetoric and certainties of the Cold War – the evil Russian bear against the peace-loving democracies of the West. Suddenly millions of people in America are passionate about a place they had not heard of a few months ago and they still cannot find on a map.

We should note, however, that the chances of all-out war with the Soviet Union were quite a bit lower then because of the secular humanism of their socialist ideology, in spite of the excesses and repressions that the particular Soviet brand of communism introduced. We should be more afraid of a European war over Crimea today, however, because we are witnessing a conflict between two capitalist powers, something that World War I reminds us can be a much more lethal brew.

Does anyone remember what even happened in Ukraine?

Does anyone remember what even happened in Ukraine? The struggle was not between tyranny and democracy — it was about whether Ukraine and its dying economy should get financial aid from Russia (about $15m) or from the European Union and the IMF (which demands all kinds of “structural adjustments”).

I’m sure Yanukovych was a creep and corrupt. He also happened to be elected president in 2012. He was overthrown by huge demonstrations that included armed fighting on both sides, and the next day John Kerry and EU governments recognized the new government, even signing agreements with the appointed, not elected, putsch leader.

Were the demonstrations provoked and orchestrated by Western intelligence agencies as Russia claims? Democracy Now! reported on the intercepted phone call between U.S. Assistant Secretary of State for European Affairs Victoria Nuland and U.S. Ambassador to the Ukraine, Geoffrey Pyatt, in which they discussed plotting a coup d’état against Yanukovich.

No one knows yet the full extent of U.S. involvement but don’t be surprised in 10 years when new information comes out. We all know, however, that the EU is not just an alliance of countries but a federation dominated by Germany (which was basically the German war aims of 1939). Ask Greece if they have independence. The Ukraine will be another Greece, a poor step-child.

So far the Western Ukrainians are not noted for their democratic bona fides.

But so far the Western Ukrainians are not noted for their democratic bona fides. And, while NPR occasionally makes reference to the fascist forces in the new government, it is mostly glided over lightly. But just to be clear: Svoboda, the Ukrainian ultranationalist movement which played a leading role in the protests and is in the new government, is openly fascist, known for its street fights under slogans like “Beat the Zhydam (Kikes).” It is worth remembering that in World War II many of the western Ukrainians, like the Polish Christians, happily slaughtered Jews when the Nazis swept in.

Svoboda’s origins are in World War II, when Ukrainian nationalists and Nazis joined in the ideology of anti-communism and anti-Semitism. In April 1943, Dr. Otto von Wachter, the Nazi commander of Galicia — the name for the Western Ukraine — turned the First Division of the Ukrainian National Army into the 14 Grenadier Division of the Waffen SS, the so-called Galacia Division.

As analyst Conn Hallinan has pointed out, “Svoboda has always had a soft spot for the Galicia Division and one of its parliament members, Oleg Pankevich, took part in a ceremony last April honoring the unit. Pankevich joined with a priest of the Ukrainian Orthodox Church near Lviv to celebrate the unit’s 70th anniversary and re-bury some of the Division’s dead.

Some 800,000 Jews were murdered in the Ukraine during the German occupation, many of them by Ukrainian auxiliaries and units like the Galicia Division.” People in Russian-speaking Crimea, who were part of Russia until 1954, clearly don’t want to go along with this direction.

We can be grateful to President Obama for reminding us of the danger that this powder keg may look something like World War I. But we must also remember that there was nothing, nothing, nothing at stake for general working class people, farmers and clerks and factory workers, who died in World War I. Thirty-seven million were killed.

It was a war of disgusting excess, industrial scale slaughter.

It was a war of disgusting excess, industrial scale slaughter, in which not one of the generals, not one of the politicians who sent people off to die faced death themselves. Instead of swallowing the propaganda on Crimea, we would do well to remember the lessons of history.

World War I produced a flood of literature and an overwhelming amount of poetry. It is pathetic that Obama, or his speechwriters, would have picked the banal piece of patriotic drivel, “In Flanders Fields” by Canadian Lieutenant Colonel John McCrae to read in his celebration of European war. It reads:

In Flanders fields the poppies blow
Between the crosses, row on row,
That mark our place; and in the sky
The larks, still bravely singing, fly
Scarce heard amid the guns below.

We are the Dead. Short days ago
We lived, felt dawn, saw sunset glow,
Loved and were loved, and now we lie
In Flanders fields.

Take up our quarrel with the foe:
To you from failing hands we throw
The torch; be yours to hold it high.
If ye break faith with us who die
We shall not sleep, though poppies grow
In Flanders fields.

And note the one line Obama skipped over: “Take up our quarrel with the foe.” That would be just a little too awkward. Because let’s not forget that World War I was an obscenely useless slaughter of nation on nation. So the line of the poem is saying that you Belgians, French, and Brits, take up the quarrel with… Germany. Oh, well, Germany is our friend now. But no matter, the important thing in memorializing World War I is that it is noble to kill someone.

Obama went on to read the “response” to McCrae’s poem, by American Moina Michael — “We Shall Keep the Faith,” which says in part:

Oh! You who sleep in Flanders’ Fields
Sleep sweet — to rise anew;
We caught the torch you threw,
And holding high we kept
The faith with those who died.

How outrageous. Here was a war of unprecedented slaughter. No reason for it. And somehow Ms. Michael lets us know that we should “keep the faith.” What does that even mean? The idea that death, death itself, not actual human needs or values, sanctifies the war and makes it something wonderful.

We have the same death-worshiping solemnity about U.S. soldiers killed in Iraq and Afghanistan.

We have the same death-worshiping solemnity about U.S. soldiers killed in Iraq and Afghanistan. Even though the wars were fought under false pretenses, even though the generals who sent the young to die simply burnished their careers, even though the war actually made tens of thousands more join anti-Western fighting groups, we are asked to keep the faith with… with the torch of the dead, I guess.

We would do well to examine the whole poetic production of the World War I experience. President Obama would have done more to earn his prematurely granted Nobel Peace Prize if he had quoted the poem by Wilfred Owen — a much more gifted poet and one who had the courage to look reality in the face. (And note, sadly, that both McCrae and Owen were killed at the front in 1918).

Owen takes the title from Horace’s Latin saying which celebrates war, “it is sweet and honorable to die for one’s country”:

Bent double, like old beggars under sacks
Knock-kneed, coughing like hags, we cursed through sludge,
Till on the haunting flares we turned our backs
And towards our distant rest began to trudge.
Men marched asleep. Many had lost their boots
But limped on, blood-shod. All went lame; all blind;
Drunk with fatigue; deaf even to the hoots
Of tired, outstripped Five-Nines that dropped behind.

Gas! GAS! Quick, boys! — An ecstasy of fumbling,
Fitting the clumsy helmets just in time;
But someone still was yelling out and stumbling
And floundering like a man in fire or lime —
Dim, through the misty panes and thick green light,
As under a green sea, I saw him drowning.

In all my dreams, before my helpless sight,
He plunges at me, guttering, choking, drowning.

If in some smothering dreams you too could pace
Behind the wagon that we flung him in,
And watch the white eyes writhing in his face,
His hanging face, like a devil’s sick of sin;
If you could hear, at every jolt, the blood
Come gargling from the froth-corrupted lungs,
Obscene as cancer, bitter as the cud
Of vile, incurable sores on innocent tongues,—
My friend, you would not tell with such high zest
To children ardent for some desperate glory,
The old Lie: Dulce et decorum est
Pro patria mori.

[Rick Ayers was co-founder of and lead teacher at the Communication Arts and Sciences small school at Berkeley High School, and is currently Professor in Teacher Education at the University of San Francisco.]

6 Responses to Rick Ayers :
Crimea, Obama, and the nostalgia for World War I