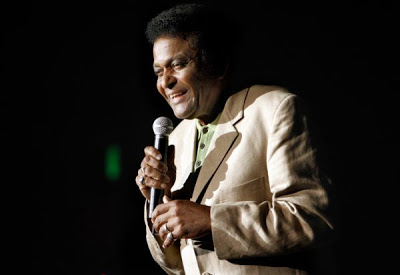 To really understand the day that the Democrats won the national health care bill for America you really needed to be at the Austin Rodeo. Sure, there are days when Rodeo-style patriotism could set your jaw muscles to steel, and there are weeks when what it means to be Texan is a (cough, cough) world-historical embarrassment.

But Sunday afternoon when Charley Pride sang his soaring eagle song from that spinning round stage at the rodeo arena, there wasn’t a heart in the house that wasn’t melted into some life-breathing hope that all of us around that dirt-floored arena had something really deep in common.

No doubt I’ve seen some world-class rodeo shows by George Jones and Willie Nelson in that dusty place. But without subtracting anything from the great native sons, allow me to muse something about the magical and reverent bond that Charley Pride forged with the rodeo audience on Sunday afternoon.

Some of what happened had to do with organic Texas connections. Charley’s band is mostly from Texas; he wore a fat ring gifted to him by Waylon. He remembered out loud how he caught an early career break in by singing opening acts for Ernest Tubb and the Texas Troubadours. Charley and Texas are welded together.

And some of Charley Pride’s art has to do with the way he references his skin color at these 99-percent-white gigs. There’s the story he tells about being named an honorary Norwegian by his fans at the Norsk Hostfest of Minot, North Dakota, an honor he cherishes, “although I haven’t quite made the transition completely” he winks as he holds up the back of one hand and rubs it with an instructive circular motion.

But none of these things would make a diff if it weren’t for the way Charley Pride sings. Much like my first experience with George Jones, there is something you get from the man in person that cannot be recorded. I don’t know why or how that happens, but it’s one reason why you still need a Live Music Capital of the World. Something you know about an artist only after you watch the eyes of the audience twinkle back.

It was the white-haired man in the cowboy hat up in section BB that really broke through for me, the way he carried his six or seven decades with dignity. And the way his lips moved to every word of his favorite Charley Pride song. Good Lord, he musta sung that song a thousand times in honky-tonks and pickup trucks under the Texas big sky, through who knows what heartaches.

The whole experience, as you can see, put me out onto the thin branch of a long limb. But there I was feeling more at home than I usually feel anyway, transfixed in a waking dream of possibility.

With that kind of spiritual preparation I just didn’t have any cynical energy to spend on Sunday night as I watched President Barack Obama take the last few steps to the East Room podium with that little springy step, that slight back-and-forth thing he did with his head, I don’t know, like he was about to treat everyone to an unobstructed slam dunk?

While I’m out on this limb where Charley Pride left me, I don’t for a minute think there will be any alternative to lots of hard work for lots of people for lots of years. I agree with the President when he says nothing was finished Sunday night. But something was started. And now that it has been started, I believe it’s something that we could have not done another hour without.

Like 1932 or 1964, the year 2010 has become a new year for the common life of the American people. And for reasons having nothing to do with Charley Pride, or Barack Obama, or even Majority Whip James E. Clyburn, like 1861, this will be a year to decide whether a common life is worth fighting for.

Already, the Texas Governor has issued a midnight statement about how he’s going to lead his state out from under the power of federal “excess” and “overreach.” After everything that happened on Sunday, I don’t think so much about how awfully hard it’s going to be to dissent from the Governor’s leadership in the coming year.

With Pride, Obama, and Clyburn, I’m beginning to see through the eyes of a new eagle. What could be more fun than the really hard work of America, far as the eye can fly?