Riding the New Media : How Obama Really Did It 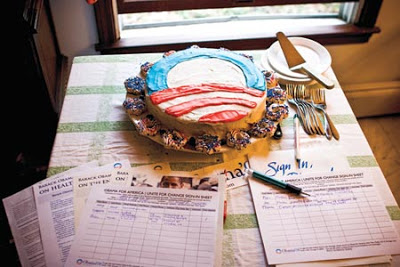 Cake and eat it too. From a party organized through Obama social-networking site. Photo by Porter Gifford / Technology Review.
The social-networking strategy that took an obscure senator to the doors of the White House.
By David Talbot

This article appears in full in the September/October 2008 issue of Technology Review.

Joe Trippi, Howard Dean’s 2004 presidential campaign manager and Internet impresario, describes Super Tuesday II–the March 4 primaries in Texas, Ohio, Vermont, and Rhode Island–as the moment Barack Obama used social tech­nology to decisive effect. The day’s largest hoard of dele­gates would be contested in Texas, where a strong showing would require exceptional discipline and voter-education efforts. In Texas, Democrats vote first at the polls and then, if they choose, again at caucuses after the polls close. The caucuses award one-third of the Democratic delegates.

Hillary Clinton’s camp had about 20,000 volunteers at work in Texas. But in an e-mail, Trippi learned that 104,000 Texans had joined Obama’s social-­networking site, www.my.barackobama.com, known as MyBO. MyBO and the main Obama site had already logged their share of achievements, particularly in helping rake in cash. The month before, the freshman senator from Illinois had set a record in American politics by garnering $55 million in donations in a single month. In Texas, MyBO also gave the Obama team the instant capacity to wage fully networked campaign warfare. After seeing the volunteer numbers, Trippi says, “I remember saying, ‘Game, match–it’s over.'”

The Obama campaign could get marching orders to the Texans registered with MyBO with minimal effort. The MyBO databases could slice and dice lists of volunteers by geographic micro­region and pair people with appropriate tasks, including prepping nearby voters on caucus procedure. “You could go online and download the names, addresses, and phone numbers of 100 people in your neighborhood to get out and vote–or the 40 people on your block who were undecided,” Trippi says. “‘Here is the leaflet: print it out and get it to them.’ It was you, at your computer, in your house, printing and downloading. They did it all very well.” Clinton won the Texas primary vote 51 to 47 percent. But Obama’s ­people, following their MyBO playbook, so overwhelmed the chaotic, crowded caucuses that he scored an overall victory in the Texas delegate count, 99 to 94. His showing nearly canceled out ­Clinton’s win that day in Ohio. Clinton lost her last major opportunity to stop the Obama juggernaut. “In 1992, Carville said, ‘It’s the economy, stupid,'” Trippi says, recalling the exhortation of Bill Clinton’s campaign manager, James Carville. “This year, it was the network, stupid!”

Throughout the political season, the Obama campaign has domi­nated new media, capitalizing on a confluence of trends. Americans are more able to access media-rich content online; 55 percent have broadband Internet connections at home, double the figure for spring 2004. Social-networking technologies have matured, and more Americans are comfortable with them. Although the 2004 Dean campaign broke ground with its online meeting technologies and blogging, “people didn’t quite have the facility,” says ­Lawrence Lessig, a Stanford law professor who has given the Obama campaign Internet policy advice (Lessig wrote The People Own Ideas! in our May/June 2005 issue). “The world has now caught up with the technology.” The Obama campaign, he adds, recognized this early: “The key networking advance in the Obama field operation was really deploying community­-building tools in a smart way from the very beginning.”

Of course, many of the 2008 candidates had websites, click-to-donate tools, and social-networking features–even John McCain, who does not personally use e-mail. But the Obama team put such technologies at the center of its campaign–among other things, recruiting 24-year-old Chris Hughes, cofounder of Facebook, to help develop them. And it managed those tools well. Supporters had considerable discretion to use MyBO to organize on their own; the campaign did not micromanage but struck a balance between top-down control and anarchy. In short, Obama, the former Chicago community organizer, created the ultimate online political machine.

The Obama campaign did not provide access or interviews for this story; it only confirmed some details of our reporting and offered written comments. This story is based on interviews with third parties involved in developing Obama’s social-networking strategy or who were familiar with it, and on public records.

A row of elegant, renovated 19th-century industrial buildings lines Boston’s Congress Street east of Fort Point Channel. On any given day, behind a plain wooden door on the third floor of 374 Congress, 15 to 20 casually clad programmers tap away at computers. On the day I visited, the strains of Creedence Clearwater Revival filled the room; a Ping-Pong table dominated the small kitchen. This is the technology center for Blue State Digital, which means that it is also the nervous system for its two largest clients, the Barack Obama campaign and the Democratic National Committee. Founded by alumni of the Dean campaign, Blue State Digital added interactive elements to Obama’s website–including MyBO–and now tends to its daily care and feeding. The site’s servers hum away in a Boston suburb and are backed up in the Chicago area.

Jascha Franklin-Hodge, 29, greeted me with a friendly handshake and a gap-toothed grin. He has a deep voice and a hearty laugh; his face is ringed by a narrow beard. Franklin-Hodge dropped out of MIT after his freshman year and spent a few years in online music startups before running the Internet infrastructure for the Dean campaign, which received a then-­unprecedented $27 million in online donations. “When the campaign ended, we thought, ‘Howard Dean was not destined to be president, but what we are doing online–this is too big to let go away,'” he says. He and three others cofounded Blue State Digital, where he is chief technology officer. (Another cofounder, Joe Rospars, is now on leave with the Obama campaign as its new-media director.)

The MyBO tools are, in essence, rebuilt and consolidated versions of those created for the Dean campaign. Dean’s website allowed supporters to donate money, organize meetings, and distribute media, says Zephyr Teachout, who was Dean’s Internet director and is now a visiting law professor at Duke University. “We developed all the tools the Obama campaign is using: SMS [text messaging], phone tools, Web capacity,” Teachout recalls. “They [Blue State Digital] did a lot of nice work in taking this crude set of unrelated applications and making a complete suite.”

Blue State Digital had nine days to add its tools to Obama’s site before the senator announced his candidacy on February 10, 2007, in Springfield, IL. Among other preparations, the team braced for heavy traffic. “We made some projections of traffic levels, contribution amounts, and e-mail levels based on estimates from folks who worked with [John] Kerry and Dean in 2004,” recalls Franklin­-Hodge. As Obama’s Springfield speech progressed, “we were watching the traffic go up and up, surpassing all our previous records.” (He would not provide specific numbers.) It was clear that early assumptions were low. “We blew through all of those [estimates] in February,” he says. “So we had to do a lot of work to make sure we kept up with the demand his online success had placed on the system.” By July 2008, the campaign had raised more than $200 million from more than a million online donors (Obama had raised $340 million from all sources by the end of June), and MyBO had logged more than a million user accounts and facilitated 75,000 local events, according to Blue State Digital.

MyBO and the main campaign site made it easy to give money–the fuel for any campaign, because it pays for advertising and staff. Visitors could use credit cards to make one-time donations or to sign up for recurring monthly contributions. MyBO also made giving money a social event: supporters could set personal targets, run their own fund-raising efforts, and watch personal fund-­raising thermometers rise. To bring people to the site in the first place, the campaign sought to make Obama a ubiquitous presence on as many new-media platforms as possible.

The viral Internet offered myriad ways to propagate unfiltered Obama messages. The campaign posted the candidate’s speeches and linked to multimedia material generated by supporters. A music video set to an Obama speech–“Yes We Can,” by the hip-hop artist Will.i.am–has been posted repeatedly on YouTube, but the top two postings alone have been viewed 10 million times. A single YouTube posting of Obama’s March 18 speech on race has been viewed more than four million times. Similarly, the campaign regularly sent out text messages (at Obama rallies, speakers frequently asked attendees to text their contact information to his campaign) and made sure that Obama was prominent on other social-networking sites, such as Facebook and MySpace (see “New-Media King” chart above). The campaign even used the micro­blogging service Twitter, garnering about 50,000 Obama “followers” who track his short posts. “The campaign, consciously or unconsciously, became much more of a media operation than simply a presidential campaign, because they recognized that by putting their message out onto these various platforms, their supporters would spread it for them,” says Andrew Rasiej, founder of the Personal Democracy Forum, a website covering the intersection of politics and technology (and another Dean alumnus). “We are going from the era of the sound bite to the sound blast.”

Money flowed in, augmenting the haul from big-ticket fund-raisers. By the time of the Iowa caucuses on January 3, 2008, the Obama campaign had more than $35 million on hand and was able to use MyBO to organize and instruct caucus-goers. “They have done a great job in being precise in the use of the tools,” Teachout says. “In Iowa it was house parties, looking for a highly committed local network. In South Carolina, it was a massive get-out-the-vote effort.” MyBO was critical both in the early caucus states, where campaign staff was in place, and in later-­voting states like Texas, Colorado, and Wisconsin, where “we provided the tools, remote training, and opportunity for supporters to build the campaign on their own,” the Obama campaign told Technology Review in a written statement. “When the campaign eventually did deploy staff to these states, they supplemented an already-built infrastructure and volunteer network.”

Using the Web, the Obama camp turbocharged age-old campaign tools. Take phone banks: through MyBO, the campaign chopped up the task of making calls into thousands of chunks small enough for a supporter to handle in an hour or two. “Millions of phone calls were made to early primary states by people who used the website to reach out and connect with them,” Franklin-Hodge says. “On every metric, this campaign has operated on a scale that has exceeded what has been done before. We facilitate actions of every sort: sending e-mails out to millions and millions of people, organizing tens of thousands of events.” The key, he says, is tightly integrating online activity with tasks people can perform in the real world. “Yes, there are blogs and Listservs,” Franklin-Hodge says. “But the point of the campaign is to get someone to donate money, make calls, write letters, organize a house party. The core of the software is having those links to taking action–to doing something.”

Read all of this article here / Technology Review