Ritmo : Inhumane Texas Detention Center Should be a Crime. Cheney or No Cheney. 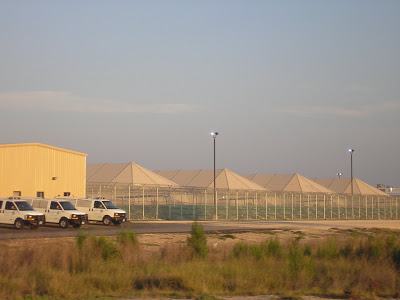 ‘Willacy County is home to the largest of a new generation of detention camps where thousands of undocumented immigrants live in massive tents with poor food, non-existent health care, facing months if not years deprived of their basic liberty.’
By Will Bunch / November 19, 2008

“I call it ‘Ritmo’ — like Gitmo, but it’s in Raymondville,” said Jodi Goodwin, an immigration lawyer from nearby Harlingen.

OK, first of all, the bad news. Dick Cheney is not going to jail, not any time soon, at least, and not because of the bizarre report that the vice president of the United States has been indicted in a small, obscure county deep in the heart of South Texas in a scandal over federal prison and detention abuses there. Aside from the obvious fact that a Willacy County, Texas, grand jury lacks authority over federal actions, the indictment of Cheney, former Attorney General Alberto Gonzales and other is not even signed by a judge, and the result of a wacky — controversial wouldn’t do the man justice — renegade lame duck DA.

It’s almost not even worth noting that Cheney’s alleged tie — investing his millions in Vanguard mutual funds that are major owners of publicly traded federal prison contractors — is weak beyond belief; by the grand jury’s reasoning, one could surmise that others with Vanguard 401K plans (example: journalists at the Philadelphia Daily News and Inquirer!) could be charged as well.

That’s a shame, because a) as noted here many times, Cheney’s role in authorizing torture and other unlawful practices in the Bush administration deserves a real criminal probe and b) the strange false-alarm over this vice presidential indictment will probably obscure the fact that what has been taking place in Raymondville, Texas, during Bush and Cheney’s time in office is a crime — maybe statutory, maybe not, but definitely a moral one.

Willacy County, scene of today’s indictments, is also home to the largest of a new generation of detention camps where thousands of undocumented immigrants — the vast majority of whom have committed no crime other than seeking America’s promise of a new life, without proper papers — are now detained in conditions that could be described ironically as hot, flat, and crowded — living in massive tents with poor food, non-existent health care and facing months if not years deprived of their basic liberty.

It wasn’t always that way. For years, American policy was to catch and release undocumented immigrants, but that all changed with the GOP’s politically charged crackdown on illegal immigration, which led in 2005 to a new policy of detaining undocumented non-Mexicans until they receive a deportation hearing and are usually booted from the country. The new policy meant doling out millions to politically connected prison firms and contractors (including the formerly Cheney-run Hallibuton) to hastily build these detention centers, including $65 million for the one in poverty-stricken Willacy County, some 260 miles south of Austin, that isn’t even a structure but, as most simply call it, “Tent City.”

Remember, these immigrants — the majority at “Ritmo” hail from El Salvador, torn apart by years of civil strife — have committed no crime beyond seeking to enter America without paperwork, and yet the Willacy County facility is in many ways quite simply a prison, like Gitmo, stark and surrounded by barbed wire. Here’s how “Tent City” was described by the American Civil Liberties Union:

The Willacy County Detention Facility is the largest immigration detention facility in the country. The facility is made up of ten large tents, each of which is designed to house 200 people. The tents are windowless and lights are on around-the-clock, making it difficult to sleep. No partitions exist to separate the showers, toilets, sinks, and eating areas, and detainees report that they are occasionally forced to eat with their hands because no utensils are provided.

Because lights are on around the clock, a visitor finds many occupants buried in their blankets throughout the day. The stillness and torpor of the pod’s communal room, where 50 to 60 people dwell, are noticeable.

Goodwin described a group of women who huddled in a recreation yard on a recent 40-degree day with a 25-mph wind. “They had no blanket, no sweat shirt, no jacket,” she said. “Officers were wearing earmuffs, and detainees were outside for an hour with short-sleeved polyester uniforms and shower shoes and not necessarily socks.”

Perhaps more troubling, lawyers said, large numbers of immigrants have been transferred from Boston, New York, New Jersey and Florida, far from their families and lawyers. Because some immigration judges do not permit hearings by teleconference, detainees are essentially deprived of counsel.

There have been other problems inside “Tent City” — mealworms were found inside some of the food there last year, for example, and another study found a stunning lack of available healthcare at Willacy — but by now you probably get the idea. In many ways, this immigrant detention program is a metaphor for what we’ve seen time and time again during the Cheney-Bush years, a rushed and ill-conceived federal action (despite the harsh impact on those captured, the program’s effect on solving the undocumented immigration problem is fairly minimal) that’s meant big bucks for a few connected contractors, with little or no thought toward its degrading impact on real human beings, or on how America is perceived by the rest of the world.

Now, a nation that famously asked for the world’s tired, poor, hungry and sick is taking refugees from a war-torn and poverty stricken corner of our own continent, and making them more hungry and depriving them of sleep before sending then away. How sad. That’s not just an indictment of Dick Cheney, though. That’s an indictment for all of us who allowed a harsh tent city called “Ritmo” to rise on our watch.

Thanks to S. M. Welhelm / The Rag Blog