Robert Jensen : Abe Osheroff and the Struggle for a Better World 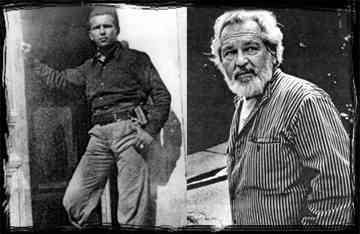 Abe Osheroff. Image from Abrahan Lincoln Brigade Archives.
‘Getting rid of hope and faith’:
Abe Osheroff on the struggle for a better world

After a recent talk about the struggle for social justice and the threats to the ecosystem, a student lingered, waiting to talk to me alone, as if he had something to confess.

“I feel so overwhelmed,” he finally said, wondering aloud if political organizing could really make a difference. The young man said he often felt depressed, not about the circumstances of his own life but about the possibilities for change. Finally, he looked at me and asked, “Once you see what’s happening — I mean really see it — how are you supposed to act like everything is going to be OK?”

I hear such concerns often, from young and older people alike. Perhaps the questions are rationalizations for political inaction for some people, attempts to persuade themselves that there’s no reason to join left/progressive movements. But most of the people I meet who struggle with this question are activists, engaged in all kinds of worthy projects. They aren’t looking for a reason to drop out but are trying to face honestly the state of the world. They want to stay engaged but recognize the depth of multiple crises — economic, political, cultural, and ecological.

Some organizers respond to such concerns with upbeat assurances that if we just get more people on board and work a little bit harder, the problems will be solved — if not tomorrow, certainly within some reasonable period of time. I used to say things like that, but now I think it’s more honest, and potentially effective, to acknowledge how massive the obstacles that need to be overcome really are.

We must not only recognize that the world’s resources are distributed in a profoundly unjust way and the systems in which we live are fundamentally unsustainable ecologically, but also understand there’s no guarantee that this state of affairs can be reversed or even substantially slowed down. There are, in fact, lots of reasons to suspect that many of our fundamental problems have no solutions, at least no solutions in any framework we currently understand.

Some have challenged me: Why give in to such despair? My response: If honest emotional responses based on rational assessments lead committed activists to feel despair, why try to bury that? It’s better to grapple with those emotions and assessments than to respond with empty platitudes.

The damage to the ecosystem may mean that a large-scale human presence on the planet cannot continue much longer. The obsession with self-interest cultivated by capitalism may be so deeply woven into the fabric of contemporary identity that real solidarity in affluent societies is no longer possible. The deskilling and dependency that comes with a high-energy/high-technology society has eroded crucial traditional skills. Mass-media corporations have eroticized violence and commodified intimacy at an unprecedented level, globally.

None of this is crazy apocalypticism, but rather a sober assessment of the reality around us. Rather than deny the despair that flows from that assessment, we need to find a way to deal with it.

When I got home from that speaking engagement, I re-read an interview I conducted with lifelong radical activist Abe Osheroff, who was the subject of a documentary film I produced. His reflections on these subjects, excerpted below, have helped me struggle with my own despair. In my conversations with Osheroff, he never looked away from these difficult subjects, and he also never abandoned his commitment to politics, right up to this death at the age of 92.

Robert Jensen: I’ve heard you use the term “long-distance runner” before. Is that the key — the notion that we have to be in it for the long haul and not expect things to change dramatically all at once?

Abe Osheroff: Not the long haul — the endless haul.

RJ: What’s the difference between long and endless?

AO: Oh yeah, there’s a difference. We will never win the fight. We will influence the players. We may be able to make life better in many ways. We will blunt the shit that the government and the corporations throw at us. But we’ll always be coping with things.

My view is that there’s no destination for the train I’m on. No destination, just a direction. No final station on that train. There’s no final destination, no socialist society where we will all be able to sit back and have a wonderful life. Bullshit!

AO: Nowhere near utopia. In fact, we’ll never get completely out of hell. But we can make some progress. In my lifetime, with all of its limitations, the movement has achieved some incredible things.

Forty-some years ago it was still possible to hang a black person in Holmes County, Mississippi, and not get arrested. Right where I worked, the year previous, they hung a black person in public, with half of the fucking county eating box lunches and watching it. We’ve come a long way, in many ways.

Women? Whatever the limitations they face, women have made a lot of progress in this country. Gay people? They have had their defeats, their ups and downs, but with successes, too. On all these things, at times the train breaks down, somebody fucks up the tracks, but it’ll get back on the track and go on. There’s no way in the world you can stop it.

In this country, one of the biggest problems we have as leftists is that there are so many strong reasons for not being an activist, in the sense that it’s possible for people — even if they’re mediocre, but if they’re aggressive enough — to make a good life in this country. It’s the easiest country in the world to become a millionaire.

On the plus side, it’s also the easiest country to be a radical. The potential penalties are very small. I have put in less than six months jail time in a whole lifetime of radical activism in this country. I would have been dead 30 times over in 20 countries I can think of.

RJ: So, we have this affluent country in which it’s easy to avoid political engagement and obligation and most people are afraid of any risk. It’s also a country in which people — whatever their politics — are used to instant gratification. Then you come along and talk about a direction, not a destination, and the endless haul. Do you find it hard to ask people to be hopeful?

AO: I talk to people about getting rid of hope and faith. And the strange effect of it is that it makes them more hopeful. I don’t deprive them of that if that’s what they need at that stage of their development. But personally, I’m not hopeful because I think hope is a kind of religion, and religions don’t work.

If you’re hopeful you’re going to suffer disappointments, whether it’s politics or your personal life. You can care about things, you can want things to happen, you can work to make things happen without being hopeful. The way I guarantee not being too disappointed is to not put too much hope onto things.

Take this conversation between you and me, for example. Sure, I hope that we’ll get something out of it. I want something to come out of it because I don’t have a lot of energy these days and I’m careful about how I spend it. But if this interaction were a total waste, I wouldn’t be upset very much. All that said, sometimes I wish I could be more hopeful. Sometimes I miss that.

AO: Because hope is comfortable. Because sometimes the way I think makes me very lonely, a kind of intellectual loneliness.

RJ: I use these terms differently. I make a distinction, as have others over the years, between optimism and hope. I’m not optimistic. If you ask me whether I think that U.S. economy is going to be fundamentally fairer in a year, I would say no. I’m not optimistic about that, because it’s a question of rational assessment, and things seem to be going the other way in the short term.

But I think there’s a way to use the term “hope” that taps into our belief that — in that endless haul you talk about — humans have the capacity to be decent. I suppose it’s about having reasonable expectations, which is what you are talking about. I’m just using different words, perhaps.

AO: Yea, it may be a difference in how we use the same terms. Sometimes people I deal with describe me as cynical. I tell them, “Where do you come up with that shit? Cynicism normally leads to inactivity. I’m 14 times more active than you are. You don’t do shit, and you’re labeling me cynical? If anybody’s fucking cynical, it’s you.”

Those people have yielded to society’s bullshit, and I think I’ve refused to yield. I’m not optimistic, and I’m not pessimistic. I’m none of those things. I’m me — learning, exploring, and, fortunately, along the way I discovered a way of living that is very gratifying. Let’s start with that. I live a gratifying life. I ask people if they want to live one. If they do, I’ll tell them some ideas on how it can be done.

The transcript of the complete interview with Osheroff is online at Third Coast Activist. The documentary “Abe Osheroff: One foot in the grave, the other still dancing,” has just been released by the Media Education Foundation at a special price of $19.95. To order, go here. For more information on Osheroff, visit abeosheroff.org.

1 Response to Robert Jensen : Abe Osheroff and the Struggle for a Better World