Robert Jensen : How the Media Has Failed Us on Haiti 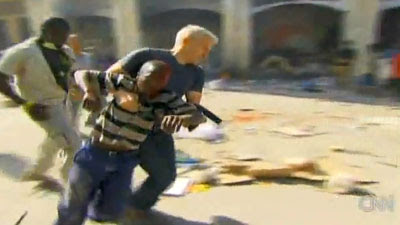 CNN’s star anchor Anderson Cooper narrates a chaotic street scene in Port-au-Prince. A boy is struck in the head by a rock thrown by a looter from a roof. Cooper helps him to the side of the road, and then realizes the boy is disoriented and unable to get away. Laying down his digital camera (but still being filmed by another CNN camera), Cooper picks up the boy and lifts him over a barricade to safety, we hope.

“We don’t know what happened to that little boy,” Cooper says in his report. “All we know now is, there’s blood in the streets.” (View video below or go here.)

This is great television, but it’s not great journalism. In fact, it’s irresponsible journalism.

Cooper goes on to point out there is no widespread looting in the city and that the violence in the scene that viewers have just witnessed appears to be idiosyncratic. The obvious question: If it’s not representative of what’s happening, why did CNN put it on the air? Given that Haitians generally have been organizing themselves into neighborhood committees to take care of each other in the absence a functioning central government, isn’t that violent scene an isolated incident that distorts the larger reality?

Cooper tries to rescue the piece by pointing out that while such violence is not common, if it were to become common, well, that would be bad — “it is a fear of what might come.” But people are more likely to remember the dramatic images than his fumbling attempt to put the images in context.

Unfortunately, CNN and Cooper’s combination of great TV and bad journalism are not idiosyncratic; television news routinely falls into the trap of emphasizing visually compelling and dramatic stories at the expense of important information that is crucial but more complex.

The absence of crucial historical and political context describes the print coverage as well; the facts, analysis, and opinion that U.S. citizens need to understand these events are rarely provided. For example, in the past week we’ve heard journalists repeat endlessly the observation that Haiti is the poorest country in the Western Hemisphere. Did it ever occur to editors to assign reporters to ask why?

The immediate suffering in Haiti is the result of a natural disaster, but that suffering is compounded by political disasters of the past two centuries, and considerable responsibility for those disasters lies not only with Haitian elites but also with U.S. policymakers.

Journalists have noted that a slave revolt led to the founding of an independent Haiti in 1804 and have made passing reference to how France’s subsequent demand for “reparations” (to compensate the French for their lost property, the slaves) crippled Haiti economically for more than a century.

Some journalists have even pointed out that while it was a slave society, the United States backed France in that cruel policy and didn’t recognize Haitian independence until the Civil War. Occasional references also have been made to the 1915 U.S. invasion under the “liberal” Woodrow Wilson and an occupation that lasted until 1934, and to the support the U.S. government gave to the two brutal Duvalier dictatorships (the infamous “Papa Doc” and “Baby Doc”) that ravaged the country from 1957-86.

But there’s little discussion of how the problems of contemporary Haiti can be traced to those policies.

Even more glaring is the absence of discussion of more recent Haiti-U.S. relations, especially U.S. support for the two coups (1991 and 2004) against a democratically elected president. Jean-Bertrand Aristide won a stunning victory in 1990 by articulating the aspirations of Haiti’s poorest citizens, and his populist economic program irritated both Haitian elites and U.S. policy-makers.

The first Bush administration nominally condemned the 1991 military coup but gave tacit support to the generals. President Clinton eventually helped Artistide return to power in Haiti in 1994, but not until the Haitian leader had been forced to capitulate to business-friendly economic policies demanded by the United States. When Aristide won another election in 2000 and continued to advocate for ordinary Haitians, the second Bush administration blocked crucial loans to his government and supported the violent reactionary forces attacking Aristide’s party.

The sad conclusion to that policy came in 2004, when the U.S. military effectively kidnapped Aristide and flew him out of the country. Aristide today lives in South Africa, blocked by the United States from returning to his country, where he still has many supporters and could help with relief efforts.

How many people watching Cooper’s mass-mediated heroism on CNN know that U.S. policy makers have actively undermined Haitian democracy and opposed that country’s most successful grassroots political movement? During the first days of coverage of the earthquake, it’s understandable that news organizations focused on the immediate crisis. But more than a week later, what excuse do journalists have?

Shouldn’t TV pundits demand that the United States accept responsibility for our contribution to this state of affairs? As politicians express concern about Haitian poverty and bemoan the lack of a competent Haitian government to mobilize during the disaster, shouldn’t journalists ask why they have not supported the Haitian people in the past? When Bill Clinton and George W. Bush are appointed to head up the humanitarian effort, should not journalists ask the obvious, if impolite, questions about those former presidents’ contributions to Haitian suffering?

When mainstream journalists dare to mention this political history, they tend to scrub clean the uglier aspects of U.S. policy, absolving U.S. policymakers of responsibility in “the star-crossed relationship” between the two nations, as a Washington Post reporter put it.

When news reporters explain away Haiti’s problems as a result of some kind of intrinsic “political dysfunction,” as the Post reporter termed it, then readers are more likely to accept the overtly reactionary arguments of op/ed writers who blame Haiti’s problems of its “poverty culture” (Jonah Goldberg, Los Angeles Times) or “progress-resistant cultural influences” rooted in voodoo (David Brooks, New York Times).

One can learn more by monitoring the independent media in the United States (“Democracy Now!,” for example, has done extensive reporting, ) or reading the foreign press (such as this political analysis by Peter Hallward in the British daily The Guardian). When will journalists in the U.S. corporate commercial media provide the same kind of honest accounting?

[Robert Jensen is a journalism professor at the University of Texas at Austin and board member of the Third Coast Activist Resource Center. His latest book is All My Bones Shake: Seeking a Progressive Path to the Prophetic Voice (Soft Skull Press, 2009). Jensen can be reached at rjensen@uts.cc.utexas.edu and his articles can be found online at Source and on The Rag Blog.]

1 Response to Robert Jensen : How the Media Has Failed Us on Haiti