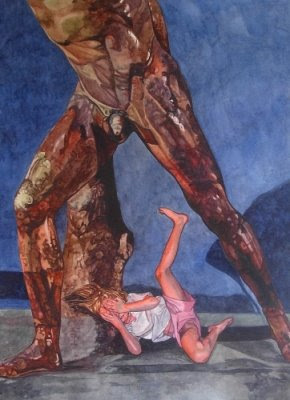 ‘Patriarchy.’ Art from Transhuman Traditionalism.
What does it mean to be a human being? Balancing theological and political insights

My first venture into political activism was in the feminist movement to end men’s violence against women and men’s use of women in the sexual-exploitation industries (stripping, pornography, prostitution), grounded in a critique of the underlying conception of what it means to be a man that most of us have been socialized to accept: masculinity as a quest for control and domination, routinely leading to aggression and violence. Our understanding of what it means to be male has to change, and to drive home that point, I often offer this challenge to my brothers: “You can be a man, or you can be a human being.”

Underneath those claims is a structural analysis of the roots of an unjust and unsustainable system, and the recognition that for all its affluence and military power, the United States is in many ways a society in collapse — politically, economically, culturally and most important, ecologically. We live in an increasingly callous culture that exploits sexuality and glorifies violence, often with racist images and themes; embedded in a house-of-cards economy built on orgiastic consumption, deepening personal and collective debt, and an artificially inflated dollar; at the end of an imperial era that is grinding to a potentially disastrous demise. And looming over all those crises are the consequences of ignoring for too long the unraveling ecological fabric that makes life possible.

This framework no doubt would seem radical, even crazy, to many. It is radical, in the foundational sense of the term: going to the root, trying to understand the nature of things. In this new century, we need radical analyses more than ever. That’s not crazy, but is in fact the only sane response to a world facing such crises. Radical is realistic, and realistic is sane.

When we dare to be radical, we confront the reality that, at both the personal and planetary levels, we are surrounded by systems based on a domination/subordination dynamic, which we have to challenge at all levels. It’s important to be clear about these particular systems — race, gender and sexuality, capitalism, and empire — all of which must be examined in the context of the coming ecological collapse.

A focus on the first two, race and gender, is often dismissed as mere “identity politics,” and there certainly is a way in which a shallow “diversity talk” can derail radical politics. But there is no way to talk about progressive social change in this country and the wider world if we don’t confront the pathologies of white supremacy and patriarchy, both of which are woven deeply into the fabric of U.S. society. Such terms may seem old-fashioned, but we live in a world of enduring racialized disparities in wealth and well-being, rooted not in the inadequacy of people of color but in white dominance, and a world in which women still face the social limitations and physical threats that come from male dominance.

These ideologies of white supremacy and patriarchy are linked to the systems of capitalism and empire, rooted in the glorification of a hyper-competitive, violent masculinity and a belief in the inherent superiority of the United States and Europe. Capitalism creates a world defined by greed and attempts to reduce us to crass maximizers of self-interest — not exactly a recipe for living a decent life consistent with our principles of equality and the dignity of all people. Empire allows the extraction of the wealth of the many to enrich an ever smaller number of people, not exactly a morally defensible model.

These systems leave half of the people on the planet to live on less than $2.50 a day (World Bank, “ World Development Report 2008”). More than 3 billion people struggle for food, shelter, clothing, education, and medical care on less than what one of us in the developed world might spend on a fancy cup of coffee. The people living at that level of poverty are disproportionately non-white and female. They live mostly in a Third World that has suffered, and continues to suffer, from military and/or economic domination by the First World, especially today by the United States. Radical politics says not only that this state of affairs is unjust, but that the systems and structures of power that give rise to it are fundamentally unjust and must be changed.

And then there is the question of sustainability. Look at any crucial measure of the health of the ecosphere in which we live — groundwater depletion, topsoil loss, chemical contamination, increased toxicity in our own bodies, the number and size of “dead zones” in the oceans, accelerating extinction of species and reduction of bio-diversity — and ask a simple question: Where are we heading? Remember also that we live in an oil-based world that is fast running out of oil, which means we face a huge reconfiguration of the infrastructure that undergirds our lives. And, of course, there is the undeniable trajectory of climate breakdown.

That’s not a pretty picture, and it’s crucial we realize that there are no technological fixes that will rescue us. We have to go to the root and acknowledge that human attempts to dominate the non-human world have failed. We are destroying the planet and in the process destroying ourselves. Here, just as in human relationships, we either abandon the domination/subordination dynamic or we don’t survive.

A radically realistic assessment of the nature of contemporary systems and institutions is necessary if we are to make progress toward real justice and real sustainability. It is realistic, though not pleasant to recognize, that when we draw our sense of self from the privilege and power that comes with being in a dominant position within unjust and immoral hierarchical systems — patriarchy, white supremacy, U.S. imperial domination, and capitalism — we sacrifice some deeper sense of our humanity. We can’t accept those privileges and that power without losing a part of ourselves, the part that gives real meaning to our lives, the part with which we yearn to connect to others.

We can be men/white/American/affluent, or we can be human beings.

That challenge leaves one obvious question unasked and unanswered: What does it mean to be a human being? Given all that we know and don’t know in the modern world, what does a claim to be human really mean at this moment in history? What qualities are we most focused on when we say we are human, when we talk about our humanity? We appeal to each other’s humanity all the time, but with surprisingly little discussion of what it means in the modern context.

As I worked on political issues connected to these systems of oppression, I found that the political traditions in which I was rooted gave me the tools I needed to analyze and resist those systems. Radical feminism, anti-racist theory and practice, traditional anti-imperialist and anti-capitalist movements, and the best thinking in ecology — all were more than adequate for providing an understanding of how these systems work and for putting together a holistic analysis of a profoundly unjust and immoral modern world. Those political traditions could take me a long way, but increasingly I had a sense they could not take me all the way home. I had difficulty fashioning an answer to that nagging question: What does it mean to be human?

So it was then, somewhat reluctantly, that I turned to theology and eventually joined a congregation. My motivation wasn’t a sudden surge of interest in the origins of the universe or a concern about what awaited me after death; my focus remains on the question of how to live fully and responsibly in the here and now. The same questions that had led me to radical politics nudged me to expand the scope of my inquiry. I had no interest in succumbing to New Age-style self-indulgence, nor did I intend to give up politics to pursue theology. My goal has been to deepen my politics through theology and open up to new ways of thinking about myself as well. Whatever I had thought of religious institutions in the past — I had never cared much for them — increasingly it seemed self-defeating to avoid engagement with religion, which is so clearly a powerful force for so many. Theology and organized religion are not, of course, the only routes to explore these questions, but there is no reason to reject the wisdom that theology might offer.

Our first step is not to pretend to answer questions but to pose questions clearly, in ways that would allow people of different views at least to start from some common ground. If I were to condense all this into one question, it would look like this:

Which practices, systems, and fundamental conceptions of what it means to be human, are consistent with a sustainable human presence on the earth, respectful of other life, in societies that provide the necessary resources for all people to live a decent life, within a culture that fosters individual flourishing alongside a meaningful sense of collective identity, helping us to take seriously our obligations to ourselves, each other, and to the non-human world?

Embedded in that one question are, of course, many complex questions that people have pondered for centuries without clear resolution. Completely new insights are unlikely to emerge here; maybe there are no truly original insights to be had by anyone. But if we want to take politics and theology seriously, we can’t pretend not to understand these questions, and we can’t evade our responsibility to struggle to understand and then to act on that understanding.

[This essay is excerpted from Robert Jensen’s new book, All My Bones Shake: Seeking a Progressive Path to the Prophetic Voice, from Soft Skull Press. Jensen is a journalism professor at the University of Texas at Austin and board member of the Third Coast Activist Resource Center in Austin, TX. He also is the author of Getting Off: Pornography and the End of Masculinity (South End Press, 2007) and several other books. Jensen can be reached at rjensen@uts.cc.utexas.edu and his articles can be found online here.]