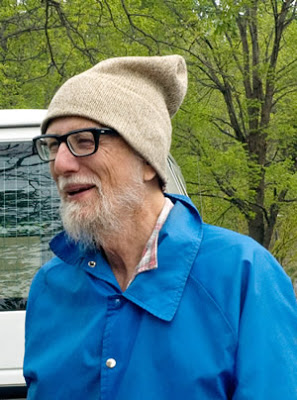 “Good teaching is living your life honestly in front of students.”

I don’t recall exactly when Jim Koplin first told me that, but I know that he had to say it several times before I began to understand what he meant. Koplin was that kind of teacher — always honing in on simple, but profound, truths; fond of nudging through aphorisms that required time to understand their full depth; always aware of the connection between epistemology and ethics; and patient with slow learners.

But, I’m getting ahead of myself. Some background: Jim Koplin was, by way of a formal introduction, Dr. James H. Koplin, granted a Ph.D. in psychology from the University of Minnesota in 1962 with a specialization in language acquisition, tenured at Vanderbilt University and later a founding faculty member of Hampshire College, retired early in 1980 to a rich life of community building and political organizing.

I never took a class from him, though in some sense the 24 years I knew him constituted one long independent study. That finally ended on December 15, 2012, not upon satisfactory completion of the course but when Jim died at the age of 79. He left behind a rich and diverse collection of friends, all of whom have a special connection with him. But I hang onto the conceit that I am his intellectual heir, the one who most directly continued his work in the classroom.

So, with that conceit firmly in place and his death fresh in my mind, it seems proper and fitting that I offer lessons learned from Koplin to the world outside his circle of students and friends.

I’ve spent a considerable amount of time in my 20 years of teaching at the University of Texas at Austin reflecting on Jim’s core insight, that good teaching is living your life honestly in front of students.

The first, and most obvious, implication is a rejection of the illusory neutrality that some professors claim. From the framing of a course, to the choice of topics for inclusion on the syllabus, to the selection of readings, to the particular way we talk about ideas — teaching in the social sciences and humanities is political, through and through.

Political, in this sense, does not mean partisan advocacy of a particular politician, party, or program, but rather recognizing the need to assess where real power lies, analyze how that power operates in any given society, and acknowledge the effect of that power on what counts as knowledge.

Every professor’s “politics” in this sense has considerable influence on his/her teaching, and I believe it is my obligation to make clear to students the political judgments behind my decisions. The objective is not to strong-arm students into agreement, but to explain those choices and defend them when challenged by students. At the end of a successful semester, students should be able to identify my assumptions, critique them, and be clearer about their own.

I would recommend this approach for all faculty members, but it has been particularly important for me because I am politically active in fairly public ways, which students often learn about through mass media and the internet. To make clear the difference between the goals of Jensen-in-the-classroom (encouraging critical thinking) and Jensen-in-public (advocating political positions), I have taken extra care to be transparent in front of students.

This also was a product of my time with Jim, who insisted that if intellectual inquiry led one to conclusions about what is needed to advance social justice and ecological sustainability, then one should contribute to those projects. Jim’s life offered me a model for how intellectual work need not be separated from community and political work.

In one of my early conversations with Jim about this balance, he referred me to one of his elders, Scott Nearing, who said that three simple principles guided his life: the quest “to learn the truth, to teach the truth, and to help build the truth into the life of the community.” Each of those endeavors feeds the other two; scholarship, teaching, and community engagement are a package deal for me. But Jim always reminded me that what one does in front of students is not the same as what one does in front of a crowd at a rally, or in an organizing meeting.

Perhaps Jim’s most important contribution to my development as a teacher came in his advocacy of interdisciplinary undergraduate education. In the contemporary academy, the reward system and culture tend to push professors toward intellectual specialization over the big picture, and toward working with graduate students over undergraduate teaching. In my connection with Jim, I saw the importance of — and joy in — a truly interdisciplinary approach to knowledge that took as its primary task teaching at the most basic levels.

The first course I taught in the university-wide program called First-Year Seminars, “The Ethics and Politics of Everyday Life,” was straight out of Koplin: I had students read five books that touched on the political, economic, and ecological implications of our choices in our daily lives. Every time I worried that I would be pushing students too far, Jim would tell me that the students were hungry for honest, jargon-free radical talk, and he was right.

I devised my current interdisciplinary course, “Freedom: Philosophy, History, Law,” in conversation with Jim. As it came into focus, I told Jim that I wanted the course to not only challenge the culture’s simplistic definition of freedom but to undermine the confidence of anyone who thinks the term can be easily defined.

On the first day of class, I tell students that the minute they think they have nailed down a definitive definition of freedom, some new experience will force them to modify that. It is the struggle to understand the concept that matters, and I am just another person struggling with them, albeit with the advantage of more extensive reading and experience.

That reflects another of Jim’s other lessons, the understanding that a good teacher learns alongside students. That doesn’t mean pretending that students have as much to teach me as I have to teach them (if that were the case, why am I the one getting paid?); the excitement comes from genuinely being open to that discovery with students.

As a teacher, I shape — but cannot control — the experience. There’s always a certain kind of thrill in that process, especially in front of a class of 300. There are days when I feel a bit like I am doing an intellectual high-wire act. Those tend to be my favorite classes.

That thrill is rooted in another Koplin lesson: Good teaching is based in recognizing our intellectual limits, our ignorance. By that, he did not just mean that any single teacher can’t know everything. Instead, Jim meant that we humans are always more ignorant than knowledgeable, that even in fields in which we have dramatically deepened our understanding of the world, there is — and always will be — far more that we do not know than we do know.

I have come to realize that the longer I teach, the more I know and the less certain I am about what I know. The more aware I am of the limits of my knowledge, the better teacher I become.

Jim also believed that all teaching required an appreciation of the arts, and he taught me to look for wisdom in poetry. To the best of my knowledge, Jim never wrote a line of poetry in his life, but that made him only more appreciative of the form.

I cannot remember if I shared this poem with him or vice versa; at some point, as it is with a good teacher, the flow of information and insight was two-way and impossible to track. Whomever it came from first, Jim and I came across the poem “Dropping Keys” by Hafiz, the 14th century Sufi poet from Persia.

The small person
Builds cages for everyone
She
Sees.

Instead, the sage,
Who needs to duck her head,
When the moon is low,
Can be found dropping keys, all night long
For the beautiful,
Rowdy,
Prisoners.

For too many students, education too often feels like a cage. If we aren’t careful, we teachers can find ourselves building cages, guarding cages, and then locking ourselves inside those cages.

Jim Koplin never stopped dropping keys for me. To honor his memory, I will try to do the same for my students.

This article was also published at New Left Project.

[Robert Jensen is a professor in the School of Journalism at the University of Texas at Austin and board member of the Third Coast Activist Resource Center in Austin. He is the author of Arguing for Our Lives: Critical Thinking in Crisis Times (City Lights, coming in 2013). His writing is published extensively in mainstream and alternative media. Robert Jensen can be reached at rjensen@uts.cc.utexas.edu. Read more articles by Robert Jensen on The Rag Blog.]