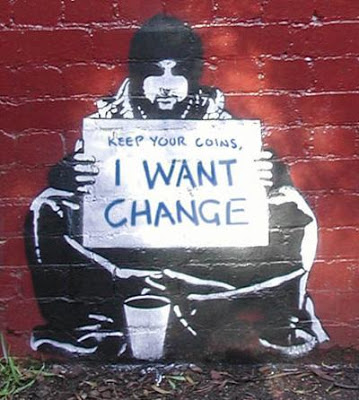 November 2 is going to be a big day in our political lives.

But November 3 will be far more important.

On mid-term Election Day, voters will choose between candidates with different positions on health care insurance, withdrawal from Afghanistan, and CO2 levels that drive global warming. The politicians we send to the legislatures and executive offices will make — or avoid making — important decisions. Our votes matter.

But Election Day is far from the most important moment in our political lives. The radical changes necessary to produce a just and sustainable society are not on the table for politicians in the Republican or Democratic parties, which means we citizens have to commit to ongoing radical political activity after the election.

I use the term “radical” — which to some may sound extreme or even un-American — to mark the importance of talking bluntly about the problems we face. In a political arena in which Tea Partiers claim to defend freedom and centrist Democrats are called socialists, important concepts degenerate into slogans and slurs that confuse rather than clarify. By “radical,” I mean a politics that goes to the root to critique the systems of power that create the injustice in the world and an agenda that offers policy proposals that can change those systems.

In previous essays in my campaign series on economics, empire, and energy, I argued that the conventional debates in electoral politics are diversionary because painful realties about those systems are unspeakable in the mainstream: capitalism produces obscene inequality, U.S. attempts to dominate the globe violate our deepest moral principles, and there are no safe and accessible energy sources to maintain the affluent lifestyles of the First World.

Why would politicians be unwilling to engage these ideas? Part of the answer lies in who pays the bills; campaigns and political parties are funded primarily by the wealthy, who have a stake in maintaining the system that made them wealthy. Also crucial is the ideology that pervades the dominant society; people have been subject to decades of intense propaganda that has tried to make predatory corporate capitalism and U.S. imperial domination of the world seem natural and inevitable.

As a result of these economic and political systems, 20 percent of the U.S. population controls 85 percent of the country’s wealth, and half the world’s population lives in abject poverty. None of that is natural or inevitable. This inequality is the product of human choices that benefit a relatively small elite, who buy off middle- and working-class people with a small cut of the wealth. This state of affairs is the product of policies that were chosen, and can be chosen differently.

Because these crucial questions are not on the agenda for the two dominant parties battling on November 2, we have to commit to a radical citizens’ agenda on November 3. The first step is building and fortifying — both the local grassroots institutions that can work independently of the powerful, and the networks of empathy and caring that will be needed if we are to survive the fraying of the systems in which we live.

For that work, don’t look to the corporate bosses or the politicians they employ. Look to the person sitting next to you.

1 Response to Robert Jensen : Radical Change Isn’t on the Ballot