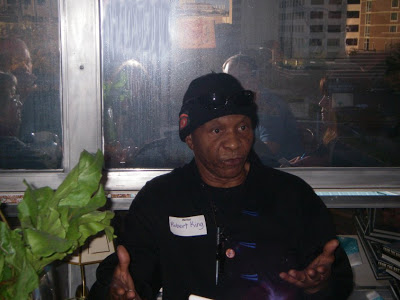 Robert King, who moved to Austin from New Orleans after Hurricane Katrina, has been out of prison for seven years, but continues to fight for the freedom of two other men who, with him, are known as “The Angola 3”. They formed the first chapter of the Black Panther Party created in prison by men who were not activists before incarceration. Prison authorities were less than pleased! Herman Wallace and Albert Woodfox have each been in solitary now for over 36 years, and the state of Louisiana, appealing the recent overthrow of Woodfox’s conviction, has denied him bail during its appeal.

A centered, down-to-earth person exerting principled leadership within an international amnesty movement, King also sells his “Freelines”, a milky, sweet, pecan confection he perfected while in prison, to raise funds for the legal battle. His book is drawing praise as an inspiring story of human survival and brotherhood, and, even more importantly, drawing attention to the ongoing struggle of Woodfox and Wallace, and to the plight of everyone held in cruel and unusual conditions in the US. A lawsuit filed by the Three, expected eventually to reach the Supreme Court, could win more humane conditions in prisons nationwide. (See www.Angola3.org.)

This entry was posted in Rag Bloggers and tagged Angola, Criminal Justice, Politics. Bookmark the permalink.