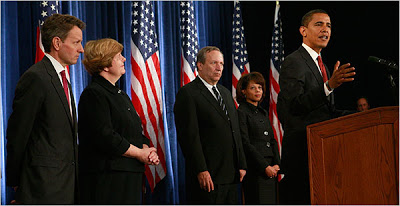 Obama’s economic team, unveiled last November: the fixers helped create the problem. Photo by Sally Ryan / NYT.
‘While the new president has already proved to be a brilliant and super-competent agent of change in so many ways, in matters of economic policy he has relied excessively on the financial “experts” who helped get America into this mess.’

Only a week into the new administration, and yet there is this nagging thought that Barack Obama’s legacy already hangs in the balance. Sounds absurd, I know, given the brief time, but his early response to the financial meltdown is just that important. Despite a terrific start in so many directions, Obama is up against an economic crisis that, although not of his making, will, if handled improperly, spell his—and the nation’s—undoing.

Obama is in these early weeks making trillion-dollar decisions that will cast the die for the rest of his promising agenda. Unfortunately, while the new president has already proved to be a brilliant and super-competent agent of change in so many ways, in matters of economic policy he has relied excessively on the financial “experts” who helped get America into this mess.

Treasury Secretary Timothy Geithner and top White House economic adviser Lawrence Summers are retreads from the Clinton years who sided with congressional Republicans in unraveling the regulatory regime created by Franklin Roosevelt that had served the nation so well. Perhaps they have now come to their senses, given the financial horrors that their deregulatory mania unleashed, but it gives one pause to see these folks back on center stage performing with the same arrogant aplomb as they did when they had it all wrong.

We can only hope they are now prepared to make amends, although Geithner and Summers often seem to be pushing for more of the same: bankers first, women and children later. The good news is that the message coming from the mouth of the new president is that he intends to make a significant departure from the Bush bailout, by placing emphasis on preventing foreclosures, curtailing bank lobbying and holding the recipients of federal funds responsible for opening the tap of loans to the public. The structure of the stimulus package is also reassuring, with its emphasis on spending money in ways that will improve the quality of life for ordinary Americans and its ban on bonuses for corporate execs who utterly failed in their responsibilities. Imagine how much better off we would be if we had just taken the first $350 billion of TARP funds and used it to help teachers, cops, nurses and firemen buy homes in the communities they serve.

We certainly should give Obama the benefit of the doubt. In every other area his early performance has been stellar. Certainly so with respect to human rights and protection of civil liberties; in his first week in office, he reversed many of the atrocious Bush-era policies. With an urgency unmatched by any other modern president, Obama has sharply countered America’s tainted image by acting to close the Guantanamo Bay detention center, ban the CIA’s “enhanced” interrogation tactics and restore the power of the Freedom of Information Act to ensure public access to the information required for an informed democracy.

In other important instances, Obama has been refreshingly true to the promises of his campaign by taking the first steps toward ending the U.S. occupation of Iraq, by moving toward energy conservation and by ending punishment of international health organizations that have been severely undermined by the dictates of anti-abortion zealots. His early actions on global warming and the Mideast show a clarity of commitment absent from the executive office over the past eight years.

In these areas, Obama has acted with an informed confidence not always evidenced in his initial moves on the economy. Why, in the management of the economy, do we hear so little from the Chicago community organizer concerned with the pain of the average person and instead perceive so much of the sensibility of the Harvard business and law school elite, preoccupied with the well-being of the denizens of Wall Street?

As Obama stated in his inauguration speech, “A nation cannot prosper long when it favors only the prosperous.” That is the problem with the Bush bailout, which Obama asked to be extended and which has resulted in little more than a rearranging of the chairs, not to mention the commodes, of the first-class passengers on a sinking ship. It has been the biggest corporate welfare program in history, enabling Wall Street hustlers to cut themselves lucrative deals while so many millions lose their jobs and homes. I’m betting that Obama will try to put a stop to all of this, but he needs to hear from ordinary folks who are hurting and outraged.

Thanks to Dorinda MorenoThe Rag Blog