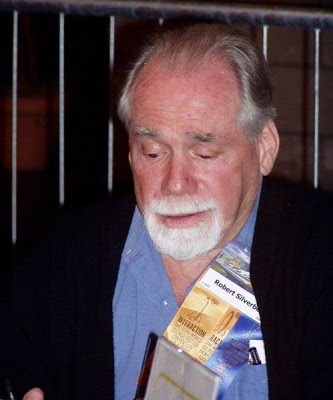 Robert Silverberg is an American author, best known for his work in the science fiction genre. He is a multiple winner of both the Hugo and Nebula Awards.

I mourn for the dodo, poor fat flightless bird, extinct since the eighteenth century. I grieve for the great auk, virtually wiped out by zealous Viking huntsmen a thousand years ago and finished off by hungry Greenlanders around 1760. I think the world would be more interesting if such extinct creatures as the moa, the giant ground sloth, the passenger pigeon, and the quagga still moved among us. It surely would be a lively place if we had a few tyrannosaurs or brontosaurs on hand. (Though not in my neighborhood, please.) And I’d find it great fun to watch one of those PBS nature documentaries showing the migratory habits of the woolly mammoth. They’re all gone, though, along with the speckled cormorant, Steller’s sea cow, the Hispaniola hutia, the aurochs, the Irish elk, and all too many other species.

But now comes word that it isn’t just wildlife that can go extinct. The element gallium is in very short supply and the world may well run out of it in just a few years. Indium is threatened too, says Armin Reller, a materials chemist at Germany’s University of Augsburg. He estimates that our planet’s stock of indium will last no more than another decade. All the hafnium will be gone by 2017 also, and another twenty years will see the extinction of zinc. Even copper is an endangered item, since worldwide demand for it is likely to exceed available supplies by the end of the present century.

Running out of oil, yes. We’ve all been concerned about that for many years and everyone anticipates a time when the world’s underground petroleum reserves will have been pumped dry. But oil is just an organic substance that was created by natural biological processes; we know that we have a lot of it, but we’re using it up very rapidly, no more is being created, and someday it’ll be gone. The disappearance of elements, though—that’s a different matter. I was taught long ago that the ninety-two elements found in nature are the essential building blocks of the universe. Take one away—or three, or six—and won’t the essential structure of things suffer a potent blow? Somehow I feel that there’s a powerful difference between running out of oil, or killing off all the dodos, and having elements go extinct.

I’ve understood the idea of extinction since I was a small boy, staring goggle-eyed at the dinosaur skeletons in New York City’s American Museum of Natural History. Bad things happen—a climate change, perhaps, or the appearance on the scene of very efficient new predators—and whole species of animals and plants vanish, never to return. But elements? The extinction of entire elements, the disappearance of actual chunks of the periodic table, is not something I’ve ever given a moment’s thought to. Except now, thanks to Armin Reller of the University of Augsburg.

The concept has occasionally turned up in science fiction. I remember reading, long ago, S.S. Held’s novel The Death of Iron, which was serialized in Hugo Gernsback’s Wonder Stories starting in September, 1932. (No, I’m not that old—but a short-lived SF magazine called Wonder Story Annual reprinted the Held novel in 1952, when I was in college, and that’s when I first encountered it.) 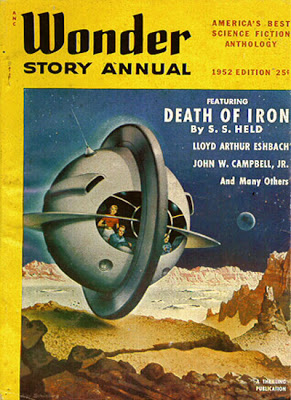 Because I was an assiduous collector of old science fiction magazines long ago, I also have that 1932 Gernsback magazine on my desk right now. Gernsback frequently bought translation rights to European science fiction books for his magazine, and The Death of Iron was one of them. The invaluable Donald Tuck Encyclopedia of Science Fiction and Fantasy tells me that Held was French, and La Mort du Fer was originally published in Paris in 1931. Indeed, the sketch of Held in Wonder Stories—Gernsback illustrated every story he published with a sketch of its author—shows a man of about forty, quintessentially French in physiognomy, with a lean, tapering face, intensely penetrating eyes, a conspicuous nose, an elegant dark goatee. Not even a Google search turns up any scrap of biographical information about him, but at least, thanks to Hugo Gernsback, I know what he looked like.

The Death of Iron is, as its name implies, a disaster novel. A mysterious disease attacks the structural integrity of the machinery used by a French steel company. “The modifications of the texture of the metal itself,” we are told—the translation is by Fletcher Pratt, himself a great writer of fantasy and science fiction in an earlier era—“these dry, dusty knots encysted in the mass, some of them imperceptible to the naked eye and others as big as walnuts; these cinder-like stains, sometimes black and sometimes blue, running through the steel, seemed to have been produced by a process unknown to modern science.” Which is indeed the case: a disease, quickly named siderosis, is found to have attacked everything iron at the steel plant, and the disease proves to be contagious, propagating itself from one piece of metal to another. Everything made of iron turns porous and crumbles.

Sacre bleu! Quel catastrophe! No more airplanes, no more trains or buses, no bridges, no weapons, no scissors, no shovels, no can-openers, no high-rise buildings. Subtract one vital element and in short order society collapses into Neolithic anarchy, and then into a nomadic post-technological society founded on mysticism and magic. This forgotten book has an exciting tale to tell, and tells it very well.

It’s just a fantasy, of course. In the real world iron is in no danger of extinction from strange diseases, nor is our supply of it running low. And, though I said a couple of paragraphs ago that the ninety-two natural elements are essential building blocks of the universe, the truth is that we’ve been getting along without two of them—numbers 85 and 87 in the periodic table—for quite some time. The periodic table indicates that they ought to be there, but they’re nowhere to be found in nature. Element 85, astatine, finally was synthesized at the University of California in 1940. It’s a radioactive element with the very short half-life of 8.3 hours, and whatever supply of it was present at the creation of the world vanished billions of years ago. The other blank place in the periodic table, the one that should have been occupied by element 87, was filled in 1939 by a French scientist, who named it, naturally, francium. It is created by the radioactive decay of actinium, which itself is a decay product of uranium-235, and has a half-life of just 21 minutes. So for all intents and purposes the world must do without element 87, and we are none the worse for that.

Gallium’s atomic number is 31. It’s a blue-white metal first discovered in 1831, and has certain unusual properties, like a very low melting point and an unwillingness to oxidize, that make it useful as a coating for optical mirrors, a liquid seal in strongly heated apparatus, and a substitute for mercury in ultraviolet lamps. It’s also quite important in making the liquid-crystal displays used in flat-screen television sets and computer monitors.

As it happens, we are building a lot of flat-screen TV sets and computer monitors these days. Gallium is thought to make up 0.0015 percent of the Earth’s crust and there are no concentrated supplies of it. We get it by extracting it from zinc or aluminum ore or by smelting the dust of furnace flues. Dr. Reller says that by 2017 or so there’ll be none left to use. Indium, another endangered element—number 49 in the periodic table—is similar to gallium in many ways, has many of the same uses (plus some others—it’s a gasoline additive, for example, and a component of the control rods used in nuclear reactors) and is being consumed much faster than we are finding it. Dr. Reller gives it about another decade. Hafnium, element 72, is in only slightly better shape. There aren’t any hafnium mines around; it lurks hidden in minute quantities in minerals that contain zirconium, from which it is extracted by a complicated process that would take me three or four pages to explain. We use a lot of it in computer chips and, like indium, in the control rods of nuclear reactors, but the problem is that we don’t have a lot of it. Dr. Reller thinks it’ll be gone somewhere around 2017. Even zinc, commonplace old zinc that is alloyed with copper to make brass, and which the United States used for ordinary one-cent coins when copper was in short supply in World War II, has a Reller extinction date of 2037. (How does a novel called The Death of Brass grab you?)

Zinc was never rare. We mine millions of tons a year of it. But the supply is finite and the demand is infinite, and that’s bad news. Even copper, as I noted above, is deemed to be at risk. We humans move to and fro upon the earth, gobbling up everything in sight, and some things aren’t replaceable.

Solutions will be needed, if we want to go on having things like television screens and solar panels and computer chips. Synthesizing the necessary elements, or finding workable substitutes for them, is one obvious idea. Recycling these vanishing elements from discarded equipment is another. We can always try to make our high-tech devices more efficient, at least so far as their need for these substances goes. And discovering better ways of separating the rare elements from the matrices in which they exist as bare traces would help—the furnace-flue solution. (Platinum, for example, always in short supply, constitutes 1.5 parts per million of urban dust and grime, which is ever-abundant.)

But the sobering truth is that we still have millions of years to go before our own extinction date, or so we hope, and at our present rate of consumption we are likely to deplete most of the natural resources this planet has handed us. We have set up breeding and conservation programs to guard the few remaining whooping cranes, Indian rhinoceroses, and Siberian tigers. But we can’t exactly set up a reservation somewhere where the supply of gallium and hafnium can quietly replenish itself. And once the scientists have started talking about our chances of running out of copper, we know that the future is rapidly moving in on us and big changes lie ahead.

Thanks to devilstower / Daily Kos / The Rag Blog