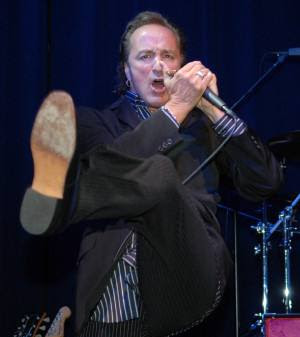 He rushes forward on stage like a ranting king exhorting the other players, filling in rhythm details with showy flashes of the harmonica.

Driving around doing some errands with a friend, I reached into the back to grab an antique cassette to feed into the dashboard. What an oldie! It’s even got the real old slip-in type commercial cassette case.

James Montgomery. You know the one called First Time Out with someone on the cover getting shot out of a cannon. There’s one song on there called “The Train” about the commuter train to New York out of Boston’s South Station. The way James Montgomery recreated the sound of a barreling Budliner with his harmonica is still dazzling today. As he says in the song, “but chances are you won’t know anybody riding on that train…”

How true. And how true about central New Hampshire as well, where absolutely nothing ever happens. “Where do you think James Montgomery is these days?” we wondered. Probably long gone by now.

Wrong again. Because at the Franklin, New Hampshire, supermarket where I stopped for veggies there was a poster advertising none other than James Montgomery and his Blues Band featuring that night none other than J. Geils, coming to Franklin in two weeks. This has to be a joke. Franklin?

In case you don’t know, it is a rare former mill town in New Hampshire (or Massachusetts) that isn’t a present day disaster. Whether it is the result of now undesirable housing concentrations or some curse of the industrial age, there are few New England towns situated on large rivers that aren’t fighting to stay alive.

Franklin certainly qualifies in this category, and so, for better or for worse, the folks at the Franklin Opera House seem to have hired a slick PR firm to give the place a makeover. I hope they didn’t spend too much, for the historic building will no longer be known as the Opera House. You can now refer to it as “The Middle,” as in the middle of New Hampshire I guess. “The Middle” doesn’t really roll off the tongue as easily as Opera House did but at least the group got this dandy one night show dropped on them from out of the blue. And out of the blues.

The night of the sold out show we hit the local Franklin House of Pizza for a have-a-beer sit down meal. The two gals in the next table were headed for the concert as well. They soon sped off to get to their seats. At the Opera House, I mean The Middle, a crowd was gathering in the lobby. Mostly goateed old men and their wives. A few kids with their grizzled hippie parents.

A young red haired usherette was enthusiastically singing the praises of the opening act, the Brooks Young Blues band out of Concord (NH). Maybe the hot guitar star is her boyfriend. She also let on that she plays baritone sax with the local swing band and a “Tower of Power” funk act. Are you sure this is Franklin?

True to her word the Brooks Young outfit is a gas. Tall and lanky Brooks himself resembles no one more than Jim Carrey doing a really good Keith Richards imitation. That might sound weird but in my book it’s known as being original. He brought on a more than slightly over the hill biker type guy who played some mean harp breaks. The bass player was a youngish looking man with a tie who turned out to be named Rachel.

They ended their set with a drawn out version of an ancient blues song (“Key to the Highway”) that Jay as a singer really killed (literally) with his terrible offbeat phrasing. Oh well, at least the rest of the show was diverting, especially Mr. Young’s hot moves and syrupy blues licks on the guitar. A young band, this Brooks Young Band, with a lot of talent and some even harder to find originality. Alas, if that were all it took…

If that were all it took, James Montgomery would be a millionaire. Still, you won’t find a harder working guy in the music business. As his band took the stage before James came on himself, another optical illusion was in the making. The first song was the old blues standard “Rock Me Baby,” ably sung and played by the solo lead guitarist. It was amazing. The guitarist was the spitting image of J. Geils 35 years ago. Had the man not aged a day since then? Was this the legendary J. Geils whose band had had so many hits out of the Boston area in the 1970s? It was uncanny the resemblance.

Then, James the man himself hit the stage. To describe the stage presence of James Montgomery as theatrical would be a gross understatement. First of all, he looks like Lionel Barrymore, or maybe John Wilkes Booth in his day. Long nosed and very Shakespearean, wizened hair slicked back but soon standing almost on end.

His stage moves are primal and mostly all his own. Coiling and uncoiling his leg and throwing it forward as he plays the harmonica through a microphone. He rushes forward on stage like a ranting king exhorting the other players, filling in rhythm details with showy flashes of the harmonica. Singing the classic blues songs with all the sincerity they were written with. This white man still has it. 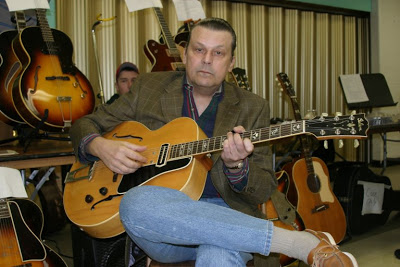 J. Geils. Photo from Captain Wolf Music.
You got some respect for history? How about Mr. Montgomery’s take on the Detroit riots of 1967, which he had experienced with fellow hometown bluesman John Lee Hooker who wrote about it in a song. “Detroit’s Burning Down” went down like it had happened yesterday. Touring with the Allman Brothers, Aerosmith, gambling backstage at Capricorn Records with the O’Jays (the big winners). “Schoolin’ Them Dice” was the James Montgomery hit from back then.

The guitarist at his right continued to astound. Had J. Geils found the fountain of youth? It didn’t help that James Montgomery kept introducing him as “the best in the business!” Kind of cryptic. Whoever he was he sure played in every style. Like B.B. King on a vintage gold Les Paul, and a little slide as well on a Strat copy for a Muddy Waters song the band did in both the original and ZZ Top styles. This is the blues like it ought to be played, led by a master who learned from the masters.

James Montgomery was probably most moving and convincing when he did Junior Well’s “Help Me Baby.” Junior Wells was his personal teacher. It was as if the West Side of Chicago from 1965 had been teleported to New Hampshire in 2009.

Then they brought out the real J. Geils. No, he didn’t look anything now like the young guy playing on stage who looked just like him 30 years ago. Much older, taller, a bit gaunt with a drawn out face, slicked back short hair and a baggy 1940s style suit. He looked like the director of the local technical high school getting ready to retire. None the less, he plugged in a big hollow body Gibson and began, perhaps a bit rusty at first, to peal off B.B. King riffs as fast as his impersonater, now relegated to rhythm. A few numbers later he sat down to play a moving Muddy Waters tribute, “Long Distance Call,” on a Telecaster with a slide. Just like Muddy. A few blues tunes later, the legendary J. Geils left the stage. A visiting guitar ghost.

James Montgomery and his band continued pouring out more excitement with their tight, taut take on the blues. After another round of introductions, we learned that the young man who played the smoking lead guitar throughout most of the evening was named George McCann. An encore began with the ever energetic Montgomery starting out on the solo acoustic harmonica while the band found their way back onstage. After the show James Montgomery came into the lobby and mixed with the New Hampshirites there. He never played “The Train” but he sure nailed the classic electric Chicago Blues that night in Franklin.

Checking out the James Montgomery website we find that he plays about a hundred gigs every year around New England and the country. He’s active in good causes like the effort by the Boston House of Blues to provide healthcare coverage for aging bluesmen. It’s kind of sad to see James Montgomery feeling he has to mention the “famous” people he and his band members have played with. Whoever these people might be, except for the classic blues performers like Johnny Winter, Bonnie Raitt, and maybe a Rolling Stone or two, they don’t hold a candle to James Montgomery himself, blues performer extraordinaire and, like a few of the other real greats, like Brian Jones for example, a strict traditionalist and purist blues historian.

New England is very lucky to have James Montgomery as a local blues star. We have seen him make these crusty Yankees shout out and shake about. A living link to the great ones. Are the blues not still the best old American-made interracial human soul defroster? Sure goes down great in an old Opera House in the center of New Hampshire.