Roger Baker : Bad News and The Wall of Denial 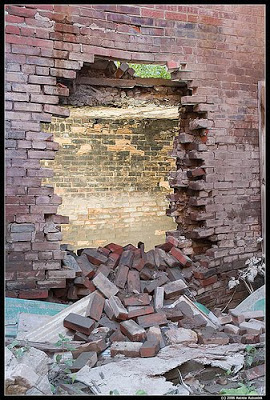 I think that dramatic experiences like the oil spill, or some other bad news equivalent, are absolutely inevitable under a corporat-ocracy. But they are also necessary for progress.

Why? To break down the wall of denial that prevents us from seeing that our global survival depends on abandoning the maximizing of global profit, with weak regulation, as our primary global motivator.

The maximum-expansionist policy inherent to capitalism, unregulated, and blind to the future, ultimately reinforces population overshoot, famine, and maximum disruption and destruction of nature. But the current exploitation is like slowly boiling a frog, the entrenched status quo really needs some trigger event to alert the system to danger.

This is because political consciousness is not a linear process; it is raised in stages through psychological breakthroughs, through responding to specific crises like the oil spill. I think Naomi Klein has written about how the U.S. political system practically requires shock therapy to initiate change, which is often used to advantage by the bad guys, as with 9/11. On a personal level this could be a job loss, sufficient to cause a traumatic revaluation of one’s political fundamentals and outlook.

It took the hyper-inflation of the Weimar republic in Germany in the 1920s to more or less permanently make the Germans fear inflation, much more to this day than the USA. I imagine the great earthquake caused San Francisco to build stronger buildings — more effectively than could any possible warnings by multitudes of seismologists and scientists.

On many issues — like energy, water, global warming, food, and population increase — we ultimately need to run into various barriers for progress to occur. We don’t need band-aids to treat symptoms; we need situations that seriously interfere with our comfort, sufficient to shake up our cultural assumptions, and that cause us accept unpleasant solutions. Better a little pain today than a lot more pain later through lack of intelligent early action on predictable threats.

The public is currently fearful and angry about government due to personal pain, but this anger is not well-focused, except now almost universally against BP in the case of the oil spill. This crisis involving natural limits tends to raise both oil addiction awareness, and corporate domination awareness.

It is unpopular to say, but we do need more of certain kinds of problems that disturb our comfort enough to make it possible to take the actions that prepare us for the future. Problems that are serious enough to disturb us into appropriate action, but yet not so serious that they cause us to do crazy hysterical things, like electing hate candidates offering simple cultural and ethnic solutions.

Meanwhile, so long as the economic pain persists, but is treated symptom by symptom by an already overstressed system, I think the public will broadly demand some new political outlets in response, and the Tea Party supporters, however they might evolve, are still in the running. Whether the political result is based on a sensible long term vision, or a toxic brew of self-reinforcing political hostility similar to the current bipartisan gridlock in Congress is the real choice.

This entry was posted in Rag Bloggers and tagged Political Commentary, Roger Baker. Bookmark the permalink.

10 Responses to Roger Baker : Bad News and The Wall of Denial