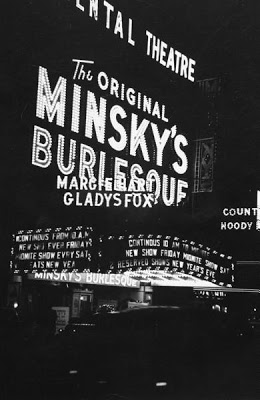 Minsky’s Burlesque. [Basically the same thing.] Photo by Peter Stackpole, 1938 / Life / © Time Inc.
‘Whenever capitalism seems to have mastered the secret of eternal success, it has a natural urge to step on the gas pedal.’
By Roger Baker / The Rag Blog / January 15, 2008

Economists sometimes refer to a “Minsky moment,” which is explained fairly well in the snip from the Wall Street Journal below.

…At its core, the Minsky view was straightforward: When times are good, investors take on risk; the longer times stay good, the more risk they take on, until they’ve taken on too much. Eventually, they reach a point where the cash generated by their assets no longer is sufficient to pay off the mountains of debt they took on to acquire them. Losses on such speculative assets prompt lenders to call in their loans. “This is likely to lead to a collapse of asset values,” Mr. Minsky wrote. When investors are forced to sell even their less-speculative positions to make good on their loans, markets spiral lower and create a severe demand for cash. At that point, the Minsky moment has arrived. “We are in the midst of a Minsky moment, bordering on a Minsky meltdown,” says Paul McCulley, an economist and fund manager at Pacific Investment Management Co., the world’s largest bond-fund manager, in an email exchange…

This stuff in the Wall Street Journal was written in August, 2007, about a year and a half ago, but it still describes the underlying nature of the current crisis very well. Whenever capitalism seems to have mastered the secret of eternal success, it has a natural urge to step on the gas pedal. With the help of the fed under Greenspan accommodating expanding investment bubbles, the newly unregulated investment bankers were attracted more toward the most highly profitable investments. Often the most profitable investments carry the most risk.

The bankers then conjured away the risk through derivatives, basically default insurance based on good-time thinking. This risk reward tended to grow and eventually undermined the stability of the entire system. In the case of global investments, the value of paper derivatives like credit default swaps was spread throughout the global system, by AIG, etc., until they became much greater than the entire global economy, thus earning Warren Buffett’s designation as ‘weapons of financial mass destruction’..

This situation involving the spread of risk everywhere with derivatives in effect assured that when the inevitable downturn finally got going, all attempts to reverse it having been exhausted in the attempt to perpetuate the bubble, it rapidly spread to all parts of the world that had been drawn in to as integrated global economy.

Whereas the crisis is global in nature, due to the international nature of finance capital, the tools to remedy the problem are weak and national in scope and rendered inefficient by politics. It is relatively easy to obtain international cooperation on trade when the global economy is booming, since cooperation is rewarded by an improved standard of living.

It is likely to be much harder to get economic cooperation when the global economy is shrinking, because few measures will appear to reward the nations that cooperate. This makes for difficult politics, because the domestic public support for an unpleasant situation now has to rely on attempting to describe how much worse things could have been, had there been no cooperation at all.

1 Response to Roger Baker : Capitalism and its Minsky Moment